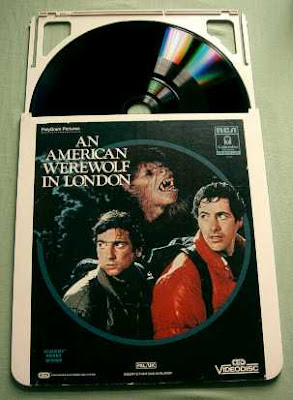 As a bit of a nostalgiaholic, I am more than a little obsessed with dead audio and visual formats. I have in my lifetime lived in a household with a Betamax (my Dad purchased an early model when he was working at an Electronics store), VHS, Laserdisc, DVD and Blu-Ray players. A dream of mine is to one day have my own little room/portion of my house set up to play every format. In my last post I mentioned the RCA Selectavision CED player (Capacitane Electronic Disc) which appropriately was introduced to the marketplace in the year 1981, a friend of mine actually has a working player (he also has several working eight tracks!) and it got me thinking about the long deceased format.

The CED is a record like disc in a hard LP sized protective case, to play the film; you insert the entire case into the player which would then extract the disc before you then remove the case, an analog stylus similar to a audio record would then play the film. Like DVDs the CED allowed you to skip to chapters and like LPs and Laserdiscs, the player required flipping mid-way through the film.

What I like about the presentation is that the size allows for larger artwork displays versus the smaller and box shaped VHS and Beta tapes. We never had a Selectavision player, but I have a very specific memory of watching The Karate Kid in the format once at a facility while my mother was doing something (funny I can’t remember why I was there, but I remember the film and that it was a CED). I also recall that the Pettys, the parents of friends of my brother who some time would watch us, had a player and a lot of Disney cartoon collections for it. 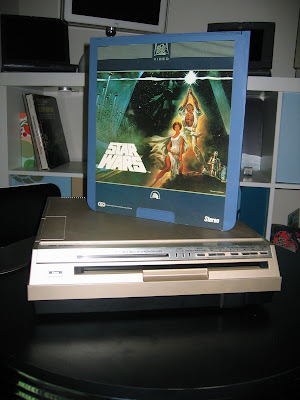 Though the technology existed since the 1960's CED players and discs were not commercially produced until the year 1981 and were extinct by 1986.

Here are some fun related videos I found on YouTube

A commercial from the early 1980s—I like how the Dad in the first clip is kind of a dick, “Let’s just say I’m watching a great movie and you, you’re watching me”

And some demonstrations people made recently showing the intricacies of the player itself.

Anyone here ever own one of these? I am curious if the video quality was superior or on par with VHS. It doesn't look all that bad from the Saturday Night Fever clips, but the Blade Runner scenes look really fuzzy and full of ghosting.

Posted by Colonel Mortimer at 8:17 PM

Did that guy in the commercial say it costs less then $500?! And I thought my Bluray player was a lot!

I think you mean the Pettit's, I do recall them having one and seeing it a few times but you do not see these at the flew market at all, you are more likely to see laser discs.

I do like the art, and I am wondering if the quality of Blade Runner has more to do with bad filming, plus its on a high def tv so possibly it wasnt made to play on that good of a tv.

I heard of these, but never saw or experienced CED Videodisc. I did with Betamax, VHS, VCD, and Laserdisc, but not this. For the time, this looked pretty cool. Thanks, Colonel.

I love all these old video formats. So nostalgic. Never saw or owned any of these, but saw plenty of Laserdics and these remind me of that time.

I too am/was a Dead Format Junkie, and have owned all these formats. Sadly, due to moving/space issues, my dream of having a room dedicated to every format imaginable is no more.

Anyways, yes, I owned a Selectavision (just a few years ago, in fact) and the quality was almost on par with VHS. I'd say that depending on the disc and the quality of the stylus (because like record needles, they do wear out) most discs were equal to VHS or maybe slightly below in quality.

The stylus has been the limiting factor in Selectavision collecting, usually - they wear out, and there simply isn't anyone making replacements. Also, I had issues where for some reason, the mechanism to pull the disc & frame out of the case wouldn't properly work, so some discs would become unplayable because the player couldn't actually remove the disc from the case.

Since there was a physical connection between media & stylus, you better hope you don't live in an earthquake prone location or ever bump the machine!

Sabrina--thanks for the feedback, I live in Southern California, so of course I will be watching some treasure obscure film on CED when the big one hits us!

I have a large collection of mint videodiscs (about 70 in all). These were my brother's, who was MR (mentally retarded), but a genius with electronic stuff and kept everything in pristine condition. Anyway, I have inherited these and his old player which I cannot get to work (I am not an electronic genius) although it seems pretty simple. Anyway, I would GIVE all this to someone if they would pick up or pay shipping, which I know is astronomical!! I live in zip 46122 if you are interested.