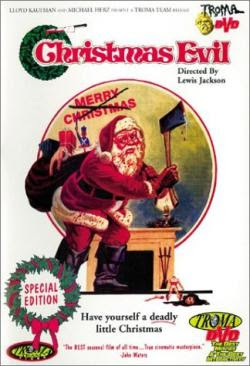 If Christmas Evil (aka You Better Watch Out) teaches us anything, and really who doesn’t go to cheaply made Troma-produced 80’s horror films for instructions on how to live your life, it’s this: Be conscientious of where you engage in your fetishistic sexual transgressions, especially if you have children. If having your partner dress as Santa Claus while making sweet love to you is your cup of tea, all the more power to you, but please do it behind closed and preferably locked doors. This film depicts one such possible worst-case scenario for parents who do not adhere to this rule.

Harry, aged 8, his younger brother Phillip and mom sneak down the stairs and what to their wondering eyes should appear? Santa Claus himself leaving presents, filling the stockings hung with such care and pilfering the cookies and milk left out for him. When in bed, the younger but more world savvy sibling confides to Harry that it wasn’t really Santa, but dad in a costume. Ever the believer, Harry denies his brother’s cynicism, but has to see for himself, so he sneaks back down the stairs where he sees Mommy kissing Santa Claus, and Santa Claus kissing her back and not just on the mouth, if you catch my drift.

Cut to thirty some odd years later, Harry still possesses a child-like obsession with Christmas. His apartment is decked out in Christmas paraphernalia, when he shaves and the cream is across his face beard-like, he talks in character as Santa Claus (while we only see this once, I assumed it was a daily routine), works as a manager in a toy factory (get it?), and most distressingly, spies on the neighborhood children, keeping large binders journaling whether they’ve been naughty or nice. I was never a Psych major, but I have to think there’s something interesting Freudian-wise about a man who after seeing his mother in flagrante delicto with Santa as a child lives a life dedicated to the holiday. Unfortunately, as is par for the course with the film writer-director Lewis Jackson ignores any insights into Harry’s relationship with his mother post opening sequence or sexuality, preferring to focus on the voyeuristic angle with the kids, while disturbing on the surface, is not predatory.

If Christmas Evil teaches us two lessons, the second is: Beware of false charity! What eventually leads Harry off the precipice of sanity and into cuckoo land is when his bosses at the toy factory reveal that their charitable cause is actually a scheme to have the employees make all the donations and the corporation claim them as theirs (I may not have explained that well, but hey, neither did the movie!) on Christmas Eve of all nights! This bout of un-Seasonalness leads Harry to believe that he is, in fact, Santa Claus. He sneaks into the factory, steal toys and goes around giving them to the good boys and girls. Of course since this claims to be a horror movie, he also punishes the naughty people. His punishment ranges from the fairly innocuous, spooking out the bad neighborhood kid to the lethal: murder!

While the ingredients are all here for an interesting, entertaining or at the very least, since this is Troma, funny film, it’s actually a bit of a chore to get through. With two exceptions, the film is really drably shot. I consider myself fairly forgiving to cheaply made films, as Maniac displayed, you can still compose interesting shots with small budgets and on location filming. The two exceptions to the overall blahness of the cinematography are the scenes that bookend the film. The initial childhood scenes actually has expressive use of color and a fantastical look, as does the final scene, where Harry, being chased by the cops, drives his sleigh (actually a white molester van painted to look like it has reindeer on it) off a cliff where it doesn’t crash, but flies (to the North Pole?). This depiction of the separation of fantasy and reality elements using lighting, framing, etc. however is the only thing in Jackson’s film that is remotely cinematic.

The fact that the DVD Netflix sent me had a horrible transfer, looked like the source material was a VHS tape edited with scotch tape, didn’t help. It doesn’t appear that I got the 2006 special edition, but rather the 2000 extraless version, so if you want a better looking copy of a crappy movie, I suggest seeking out the former, which also includes a commentary between Jackson and John Waters. As far as Christmas slasher films go, this lands itself way below Black Christmas and Silent Night, Deadly Night and probably somewhere in between Silent Night, Deadly Night 3: You Better Watch Out and Black Xmas (the 2006 remake).

Hope you have a Happy Holiday, please don’t kill anyone…or feed your Mogwai after midnight!
Posted by Colonel Mortimer at 4:01 PM 1 comment:

When Bad DVD Covers Happen To Good Movies (Sort of) #3

Although I mentioned it in another context in the postscript of my Maniac review, I failed to evoke Black Christmas when discussing other horror films that open with a shot of the killer’s subjective point of view. An especially glaring omission since not only does it predate the other films mentioned (yes, even Halloween) but because since the age of 16 when I randomly discovered it in the horror section at the Wherehouse (Where? The Wherehouse!) , I’ve become slightly obsessed with the film and count it amongst my favorite films of all time, regardless of genre.

With the holiday season in full bloom, this month will mark my annual viewing of Bob Clark’s 1973 masterpiece, and hopefully unlike a few years ago when I arrived to a sold out sign, I will be able to see it theatrically for the first time at the New Beverly on December 18th when it plays with 1984’s Silent Night, Deadly Night in a Christmas slasher double bill. Perhaps after that screening I will discuss in further detail my appreciation for the film itself, but now to the subject at hand: the overall sucky-assness of Critical Mass’s Collector’s Edition DVD cover, circa 2003. There are several different DVD releases of Black Christmas with several different covers, but I am focusing on this one because it’s the DVD most leaden with extras, and it happens to be the version I own. 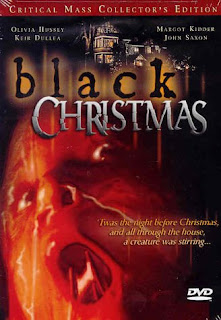 Apparently employing the same graphic designers assigned to create the many radio talk show host billboards in Los Angeles, the Black Christmas DVD cover is a mess of composition, fonts gone crazy and a lame tagline. Let’s start with the composition, I have no issues with the background shot of the sorority house that serves as the setting for the majority of the film, but egads, that foreground picture is horrendous, having seen the movie numerous times it took me a close inspection before I realized that the person in close-up is not in fact a victim of the invasion of the body snatchers or a burn ward patient, but rather the film’s first victim, suffocated by a plastic bag. What would someone who hadn’t seen the movie think? As for the mixed fonts, was that the result of a late night compromise between someone who wanted to go with an X-Files inspired glowing uncapitalized typewriter feel with someone who is a big fan of the shattered glass effect? In the future, someone has to just give up their pride and say, you know what bro, I’ll get the next cover. Lastly the tagline “’Twas the night before Christmas and all through the house, a creature was stirring…”, while not as lame in comparison to the other atrocities, it pales next to the original tagline which is still one of the all time greats: “If this movie doesn’t make your skin crawl…IT’S ON TOO TIGHT!”

BUT…and here’s where Critical Mass redeems itself, when you tear through the shrink-wrap, you have the option of reversing the cover where you can display the classic hand drawn poster containing a clear view of the suffocated victim in a Christmas wreath, with the original awesome tagline and the title in one continuous font throughout both words. Black Christmas was released under several different titles including Silent Night, Evil Night and the less festive Stranger in the House, but each release featured this classic design. While I have to slag Critical Mass for not making this the cover buyers will see displayed at their local DVD retailer, I do give them huzzahs for including it at all! This is the cover that prompted my initial rental and began my 15 plus year love affair with the film. If this was the cover when I was 16, I probably would’ve walked out with the latest Children of the Corn sequel instead. 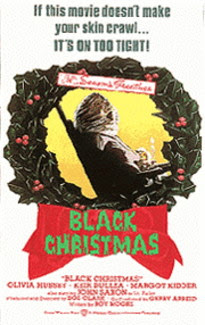 Special Note: This is the third or fourth time I’ve mentioned Black Christmas on this blog, and the first time I didn’t reference last year’s crappy remake. Yay for me! Oh, whoops…
Posted by Colonel Mortimer at 10:28 PM 20 comments: