Trailer of the Week: Remembering My Favorite Film of the '00s (thus far)

With only eight months left in the decade, pretty soon the usual suspects will begin compiling their list of the 00's best films (have we decided what we are calling this decade yet? The aughts?).  Without too much thought given to the subject, I'd nominate Michel Gondry Eternal Sunshine of the Spotless Mind off the top of my head, which coincidentally just celebrated it's fifth anniversary on March 19th (in related news: I feel old).
Whether you find the conclusion of the film as a triumph of love or a cynical assertion that these two characters are doomed to a self-perpetual cycle of co-dependence (something hinted at in an excised denouement in Charlie Kaufman's script that didn't make the final film), or hell, both, is really besides the point, the essential message I take is something much simpler: keep the bad memories, because they are just as essential a component of our lives as the happy ones.
I saw Eternal Sunshine at a particularly poignant moment in my life: a few months after a long, and similarly doomed cyclical relationship had finally come to it's end. While painful at the time, the film helped me in some small way to appreciate the moments I had with that person and I met my wife within 10 months of catching it opening day (celebrity sighting/gossip: I had a conversation with Sarah Silverman and her sister who were companions of one of the friends I saw the film with on the merits of Michel Gondry's work after the showing, and it was refreshing to see the usually sardonic comedienne notably touched by it's artistry).
Here is the film's equally brilliant trailer which opens as a commercial for the Lucana corporation before morphing into a dialogue light quick montage of moments from the film set to ELO's "Mr. Blue Sky". From the first time I saw the trailer theatrically in the fall of 2003, I knew the film would be special, although I could not foresee the particular connection that I would, and still, have to it.
Posted by Colonel Mortimer at 4:22 PM 3 comments:

A couple of weeks ago some friends sent me this link to a 125 page transcript between Steven Spielberg, George Lucas and Lawrence Kasdan of the first story conference of a project that would eventually be Raiders of the Lost Ark.

In response I sent this, I am not saying it's any great shakes, but it's the only thing I've managed to write in the last the few weeks so I may as well include it here at my neglected blog.

Three well dressed EXECUTIVES sit at a large oval desk, they stare with great anticipation at a world famous, multi-chined, DIRECTOR.
Executive #1: After the success of the Star Wars trilogy, Universal wants to be in the Lucasfilm business.
Executive #2: So what great ideas do you have twirling around in that fantastic brain of yours?
The Director's face emerges from a mountainous pile of cocaine that would make Scarface himself blush.
Director: So there's this comic book, see, it's about a duck from outer space, he comes to earth. Money in the bank.
Executive # 3 cautiously makes a wiping notion with his index finger to his cheek.
Executive # 3: Uh, Geo--Mr. Lucas, you have some, uh, on your cheek there.
Director: Wha?
He touches his cheek, feels the offending substance, pulls out a $5,000 dollar bill, crumples it like a Kleenex and uses it to wipe it away.
Director: There.

Executive # 1: So this, uh, duck idea?
Director: Yeah, his name is Howard, it's going to be.....
The Director suddenly convulses, the pupils of his eyes turn white.
Director: You meansa peoples gonna die!

The Director shakes out of his possessed state, returns to normal.
Director: Sorry, just an idea for later.
Posted by Colonel Mortimer at 6:54 PM 2 comments:

The Movies Go to the Movies: 10 to Midnight 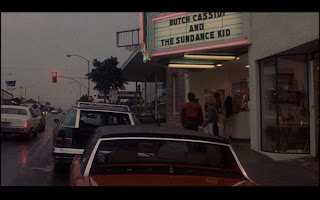 "You know what this is for, Warren? It's for jerking off!!!"-Leo Kessler (Charles Bronson)

After subjecting myself to a double bill of two underwhelming recent films (Taken, the Friday the 13th reboot) that attempt to replicate the trashy aesthetics of the 70s-80s American B-movie, I was ready for the real thing. Luckily I had a Charles Bronson film in the mail courtesy of Netflix, and not just any Bronson movie, 10 to Midnight, his first film produced by the Cannon Group (the studio which would release every movie starring him from here until the end of the decade), which incidentally enough was a kind of hybrid of the two modern films in that it featured a highly trained protective father and a serial killer with a thing for young nubile ladies. While it's yet another entry in Bronson's post-Death Wish shtick where his renegade character is the only sane man in a pansy society where crime reigns and the police are ineffectual due to rules like Miranda rights and shit like that, it does have the novel twist of pitting the Bronson archetype against a serial killer who stalks women in the nude. To clarify, he actually undresses before chasing his prey!
Early in the film, our stripping serial killer decides to head to the movies and try to pick up on some young girls to establish an alibi when he leaves out the bathroom window to murder his target. Which movie does he see? Butch Cassidy and the Sundance Kid. And where does he go to see it? Even with out any shot's of the theatre's name above the marquee, anyone whose been there will discern this is Santa Monica's own Aero theatre. 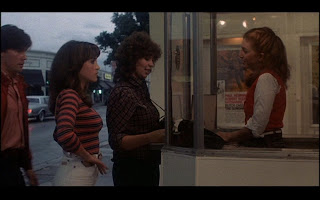 Aero denizens will appreciate that not only were the exterior scenes shot on location, so were the interior shots, including the lobby, the actual theatre, even the tiny restroom whose window serve as our villain's escape route.

The Aero has been a neighborhood fixture on Montana Avenue since 1939 and was the boyhood cinema of actor/director/Sundance film festival founder Robert Redford (not sure if Butch Cassidy playing there in this scene is a shout-out or a mere coincidence). I was unable to track down too much information about the theatre's history, I gathered it was a second run theatre in the late 70's/early 80's (the time 10 to Midnight was filmed) and ran as a AMC theatre until 2002 (I remember The Bourne Identity was playing there the first time I visited the area shortly after moving to Los Angeles). In 2003 it was purchased by the American Cinematheque who took over the programming, turning it into a repertory theatre and sister site to it's similar renovation/reacquisition, Hollywood Boulevard's Egyptian theatre.

So today, you are just as likely, if not more, to catch a screening of Butch Cassidy and the Sundance Kid there then you were in 1983. 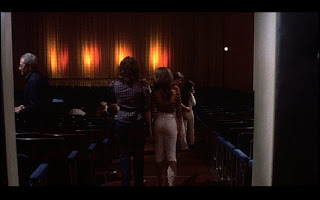