The Movies Go To the Movies: Lethal Weapon

Along with Die Hard, Lethal Weapon was one of the major action template movies of the 80's and it's influence is still being felt today, the Rush Hour movies being a prime example. I rewatched it recently for the first time in at least a decade and a half; the script by highly paid at the time screenwriter Shane Black lends a certain wit and attitude to a rather nondescript plot that floats from action set piece to action set piece without taking any pause for logic. Director Richard Donner moves things at a brisk enough pace that it's not until a post viewing mental summation you realize that the parts don't really add up to a coherent sum, but by that point, it doesn't really matter.

More to the point of this blog post, at about the thirty minute mark Seargants Riggs and Murtaugh take a break to get a hot dog on the corner of Western and Wilshire: 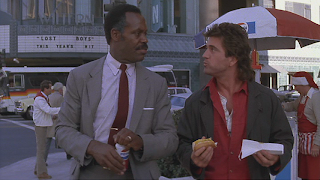 If you are a fan of those funny pages games where you try to figure out what's askew in a particular picture, you would have noticed two things off kilter in this frame:

1.) The Wiltern, though originally a movie theatre, was by it's 1985 rennovation converted to a concert venue.

Well, as for the first point, it's a movie they do that. On the second part, a little wishful thinking on the part of the executive producer of The Lost Boys, who is none other than Weapon director Richard Donner.

Tip of the hat to Heath for the suggestion. 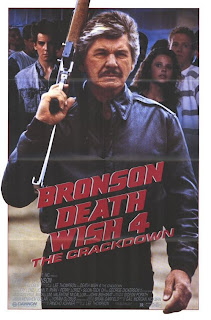 Death Wish IV opens with a familiar set-up: A lone woman walks through a desolate parking garage looking for her car. Upon reaching the vehicle, which, don't you know, won't start, she sees a threatening looking hoodlum in the distance. She blinks and there is a second hoodlum and then a third. Things look dire for the poor woman, until, hurrah noted scum-blowing-awayer Paul Kersey (Charles Bronson) arrives with his trusty, large, and in no way phallic, revolver to exterminate the anonymous hoods one by one. But as he reaches the last no good punk, and remove his mask to look him in the eye, the face that Kersey sees is his own!!!! Before you can say Holy Luke Skywalker in Empire Strikes Back we cut to Kersey waking up in his home. It was all a dream.
Considering that Kersey didn't wake up masturbating, we can assume that for the first time in the Death Wish series, the character is confronted with a bit of self analysis. Does Kersey see himself as partaking in a role that is cyclical and is his willingness to bend his morals for vengeance's sake eventually going to led to a self destructive prophecy? Okay, no, that will never be mentioned, but the allusion, however tenuous coupled with the illusory nature of the opening scene are the first signs that we are no longer being led by the indifferent hand of parts 1-3 director Michael Winner. J. Lee Thomspson, himself a journeyman with a similar hit and miss oeuvre to Winner takes over the reigns (and yes it's a dream sequence, but based on Winner's directorial display in the first three, he would have not thought to delineate any formal differences between reality and the dream). But alas, if you thought (or feared) that the long standing right wing revenge thriller cum exploitation series would change, or gasp, grow a conscience, your fears are unfounded, the rest of the film hews close to the series' template, although with some appreciated tweaks.
Paul Kersey's urban tour of duty hops back to Los Angeles (as in part II), where he is back to being an architect (his 9 to 5 job) and is living with his fiancee whose daughter is like a daughter to Kersey, we know this because Kersey says to her "you're like a daughter to me", which if you know the history of the guy's offspring is not really the most comforting comparison. Well, you know where this is headed, the step-daughter is led to a life of drug addiction via her Ian Zering look-alike boyfriend and overdoses.
After a bit of platitudes about the dangers of drugs (there is a scene that plays out pretty much like this: Kersey: Drugs are bad and dangerous to our society. Other Person: Bad, you say? Tell me more about this philosophy of yours.), it takes about five minutes for Kersey to rid the world of the punk who sold the cocaine that killed his daughter. Hey, he's an old pro. But then the film changes course and Kersey is offered unlimited money, weapons and resources by a rich dude who claims to have lost his child to drug culture (spoiler: this rich guy is not altruistic but the main bad guy who wants to rid the street of his competition! You would probably get the subtle hints if you've ever seen a movie before) to clean the streets. Kersey takes him up on his offer with a "shit, I've been doing this for free for the last thirteen years" glare. This new plot device allows for a twist in the unfortunate class distinctions that plague the first three films, where upper class bourgeoisie Kersey is consistently at war with criminals from more lower class background, or to but it more bluntly poor unmannered people attack rich mannered people, rich person becomes unmannered, kills poor unammanered people, audience cheers.
While I complained about some of the cartoony aspects in the violence of Death Wish III, I kind of dug the more over the top elements of DWIV, with Bronson going undercover in scenes, including as a waiter in a restaurant where he offers the mobsters an explosive bottle of wine and an epic dummy falling to his death scene. I guess either the Cannon mystique finally rubbed off on me or I was more willing to accept it due to the lack of involvement of dancing children or the elderly. Or perhaps Thompson's better at this sort of thing.
Death Wish IV is more of the same, and I wouldn't recommend it unless you are a diehard Bronson fan or are reviewing all the Death Wish films for your blog or something, but as someone aware of the blueprint, I kind of dug the slight alterations it offers. If you only see four Death Wish films, make sure this is one of them.
Posted by Colonel Mortimer at 2:59 PM No comments: