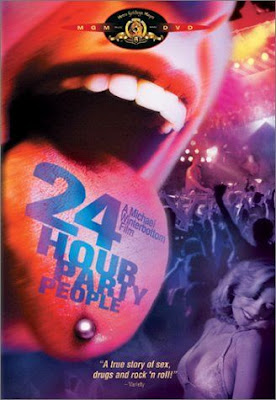 Through shadowy means, I have been able to obtain the transcript from the art director's meeting at the MGM DVD division on the day of the decision to go with the cover:

"So what's on the schedule"

"The film is 24 Hour Party People"

"Okay, never heard of it. But the stock solution for smaller market films is a big picture of the star of the movie on the cover. Who's in it?"

"Steve Coogan...Coogan...Okay, I got it, a big picture of him with his "Crocodile" Dundee clothing on, and maybe the tagline could be "You call that a party? Now, this, this is a party"

"Oh? Then who is Steve Coogan?"

"So what's this movie about?"

"The late 70s-early 80s post-punk and dance music scene and the man who created Factory Records and introduced the world to bands like Joy Division, New Order and the Happy Mondays"

"I've never heard of any of those bands, but I got a vision...this movie is about outsider non conformist, in your face type music, like Fall Out Boy right?"

"What is more in your face than a giant picture of a guy's tongue sticking out right at you?"

"The answer is nothing is more in your face than a giant picture of a guy's tongue sticking out right at you...except for...a guy with a pierce tongue sticking his tongue out right at you! That's it, make it happen. I want people afraid that this DVD cover is going to eat them, that's how punk this movie is. Now, I have a lunch to get to."

"You sure about this one?"

"Do I look sure...of course, I am sure...oh and another thing, let's have the title on the dude's tongue and I don't know...a random hot babe that is not in the movie on the other side" 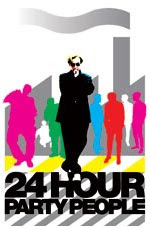 This poster gives more of the sense of the film and actually looks like it could be the record cover for a band that was on Factory Records, well, actually it looks a lot like a Wire album, and they were not on Factory, but they are from the time frame and sensibility of the bands featured in 24 Hour Party People and not the dated 90s grunge signifier that is a pierced tongue.
Posted by Colonel Mortimer at 9:24 PM