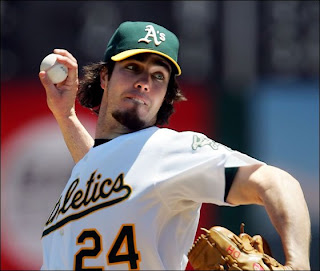 Early this afternoon the Oakland Athletics were one out away from being no hit by a forty year old pitcher, they have no regular everyday starter with a batting average above .300, they are six games out of first place in the AL West to the hottest team over the last month, the Los Angeles Angels (of Anaheim), at one point their entire outfield was on the DL, currently their DH is on the DL, as is their closer, and two of their starting pitchers, on top of which, coming into the season they didn't have a clear cut number five starter. Yet, they are three games above .500 and that is all due to some exceptional starting pitching, foremost being opening day starter Dan Haren. This is my pitch (pun fully intended) for Haren to be named not only an All Star, but to the AL starting pitcher in the All-Star Game.

Haren is still an up and comer, he doesn't have the sexy name, he's not the Rocket, Dice-K or Schilling, he's not the sexy strikeout specialist that Johan Santana or Justin Verlander are (though he does have 14 more K's at this point of the season than Verlander), and most importantly he doesn't play for a team that wears pinstripes or has a red B on their cap. But what he has been during the first two and a third months of the season is the best pitcher in the AL and running neck and neck with the Padre's Jake Peavy for best pitcher in the entire major league.

* (As discussed in Sam Walker's book Fantasyland (thanks by the way, Heath), strikeouts are one of the most overrated stats in baseball, strikeouts are not the most effective strategy because most take about seven pitches to achieve, eating into pitch counts and shortening the length of a pitcher's start)

In comparison, let's look at the stats at this point of last year's opening day starter for the A's, the San Francisco Giants' newest ace, and millionaire a hundred times over, Barry Zito.

This isn't to slag on Zito. He's a solid pitcher and it wasn't like the A's made any effort to resign him and after a pretty awful start (including a nice trouncing by his former team) he's vastly improved, allowing only two earned runs over his last three starts. He'll be fine. The sight of him in a Giants uniform is still disturbing, but hey at least it's not the Yankees, Angels or Red Sox. Oh by the way, Harden v. Zito this Saturday!

What I meant to show by comparing his stats to Zito's is that Haren has thrived when given the leadership role and along with the surprising Chad Gaudin (winner of his last five decisions, second in the AL in ERA) a former relief pitcher thriving in his new role as starter, he's getting the young injury plagued and hitting slump prone Athletics through a very tough part of the early season and keeping them in a position to make a late season push for the Wild Card.

Nothing short of a long term injury or monumental collapse over the next few weeks will keep Haren off the All Star team. He will probably be the A's sole representative, it'd be nice to see Nick Swisher makes the squad, but with him toeing the line of .300 and not leading any significant batting categories in the AL, sorry Nick I don't think second in the league in walks is your ticket to the Mid-Summer classic, it seems unlikely. Despite having the second best record in the Major League during the 2000s, the A's usually have only one All Star per season, who could forget the glory of 2005 when middle relief pitcher Justin Duchscherer stood proud as the A's sole representative (this despite a 88-74 record), while the Yankees, the team with the best record during the 2000s, usually has half of its hitters in the starting lineup, two to three pitchers, the coaching staff, batboys and their player's mistresses all accounted for.

The one thing I see standing in Haren's way from being named the AL starter, well other than he's not a Yankee or Red Sox, is his relatively-small-for-his-amazing-stats win count of six. But let's, as the American Beauty poster urged, look closer. Since losing his first two games of the season, he has not lost a single decision, oh by the way his total ERA for his two loses? A whopping 0.69. Is it his fault he's on the most anemic hitting team in the entire league? Further proof of his hard luck, the line for his last start Monday versus the Red Sox: 7.2 Innings Pitched, 2 Earned Runs, 1 Walk Allowed, 9 Strikeouts. This is a dream start for most pitchers in the major league. It actually increased his ERA by .06 points. He leaves the game with a two run lead and guess what happens? Injury fill-in closer Alan Embree blows a save in the bottom of the ninth. Earlier this year, Haren had a three start stint versus the nadir of the league Tampa Bay and Kansas City (sorry, Heath) where he got three straight no decisions. Over the course of those three games he allowed four runs, pitched 21 innings and struck out 24 hitters. I repeat: he got no decisions in all three games! In three games versus the Devil Rays and the Royals, the A's couldn't get him more than three runs to give him the wins he deserved (they did win the Devil Rays game, getting three runs in the bottom of the ninth, after Haren was taken out of the game). If Haren was on the Yankees, Red Sox, Mets, Indians or any team with solid hitting and reliable relief pitching, he could conceivably have a record of 10-1 right now.

Being a pessimist, I am predicting Josh Beckett gets the nod. Luckily the voting for pitcher is entirely up to the coaching staff, which I believe will be the A's since they lost last year's AL Championship series to the Tigers, and not the fans, so Japan cannot stuff the ballot box with Dice-K votes and since Schilling is on record as saying he has no plans on retiring, there won't be the old "give the retiring guy his last start" deal in effect. All this leads me to believe the man taking the mound in July in Whatever The Fuck Its Called These Days Park in San Francisco will be the most deserving pitcher.

If you are still unconvinced, here's a picture of Haren (next to A's second baseman Mark Ellis) with his doggie! 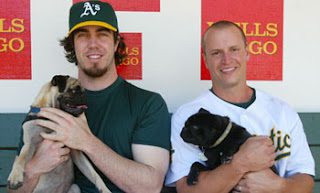 Posted by Colonel Mortimer at 10:42 PM

I don't know anyone who says he shouldn't be starting, I think he should. I would call the A's the most annoying team in baseball they just win despite no power, no fans, and no stadium. Ugliest winners ever.

Are people really talking about Haren? Maybe in the bay area they are. In LA, no. ESPN? Well I know what brand of socks Roger Clemens wears and how Barry Bonds performed in batting practice and everybody whose ever played baseball's opinion of Bonds' potential to pass Hank Aaron's home run record and whether or not its good for the game or not (and Matthew McCounaghey's as well), Dan Haren, not so much play on Sportscenter.

And isn't the term ugly win contradictary by nature? You don't get an extra win for blowouts than you do for bottom of the ninth walk off walks. Personally, I'd reserve ugly as an adjective to describe performances like Zito's two starts versus the A's this year.

they should beat him, i think they have a superior scouting report. The real question is why are all A's fans is such hatred of Giants?? Seriously, shouldn't you all being paying more attention to your own teams? And the Angels who own you guys?

i don't hate the Giants. they just suck.

Hey Sean, I don't spend any of my time hating the Giants. I am pretty indifferent to them. I actually was rooting for them in that World Series a few years ago. I do take pleasure in Barry Zito struggling just as I am sure you are pleased Jason Schmidt is doing terrible, not because he's on the Giants per se, but mainly because I want to make the A's decision not to even attempt to resign one of the best young pitchers in the major league make some sort of sense. You seem to be the one dissing the A's saying they have no fans and are ugly winners and the Angels own them which doesn't seem to be the most researched claim, seeing how the A's won the AL West only last season and are at about .500 against them this season despite the fact that the Angels have one of the top records in the entire league and way outspend the frugal A's.

Just out of curiosity's sake I looked it up, the A's have a 4-2 record this year against the Angels.