Trailers of the Week: Wake Me When its Autumn

Although today's calendar technically marks the first day of summer, we are already midway through the annual all sequels and blockbusters all the time fare that the major studios so graciously offer us at this time every year. And thus far the pickings have been, shall we say...uninspiring. This became all the more evident when trailers for a trio of upcoming fall releases popped up on the internet this week promising cinematic goodness still months in the waiting. Daylight savings can't get here fast enough.


No Country For Old Men

The Coen brothers first film since the much reviled The Ladykillers in 2004, which by the way I didn't think was as awful as its reputation and actually enjoyed more than Intolerable Cruelty, but still felt like the brothers were in a holding pattern of sorts, why were one of the most unique modern filmmakers wasting time remaking a perfectly fine film? No Country for Old Men premiered at Cannes last month, and while it came home without any prizes, it did receive copious amounts of praise. Judging from the trailer, it looks like a return to the Blood Simple/Miller's Crossing vibe for the Coens. "The Ultimate Badass" indeed. No Country For Old Men opens in select cities on November 9th (that better mean Los Angeles buddy) and throughout the country on November 21st.

There Will Be Blood

After having four films released in a five year span between 1997 and 2002, there has been no Paul Thomas Anderson directed films in the five years since, though he did assist Robert Altman on A Prairie Home Companion. I am one of the rare, but devoted, persons who thought his last film, Punch Drunk Love, was also his best. I also loved Hard Eight and Boogie Nights and have an interesting love-hate relationship with Magnolia, which I actually thought worked best during its most indulgent moments; i.e. the opening montage, the singalong and the frogs. There Will Be Blood, the first of his films that is an adaptation (of the Upton Sinclair novel, Oil!) and not an original story, looks to be his most ambitious work to date. Looks like he boned up on his Terence Malick during preproduction. This is not an official teaser, but just something that he gave the good people at the P.T. Anderson fansite, Cigarettes and Red Vines as a way of whetting their appetites. Consider my appetite duly whetted, sir. There Will Be Blood opens in select cities on November 21st.

Margot at the Wedding
Powered by AOL Video
While I found his first two films, Kicking and Screaming (not the Will Ferrell soccer movie) and Mr. Jealousy a little too "clever", and at the time partially placed the responsibility of my less than impressed response to Wes Anderson's The Life Aquatic on his contribution as co-writer, his last film The Squid and the Whale, changed my tune on Noah Baumbach. It was my favorite American film of 2005, an honest, devastating but hilarious take on divorce and its effect on children. His latest film stars Nicole Kidman and his wife Jennifer Jason Leigh as sisters reuniting for Leigh's marriage to Jack Black. It opens in limited theatres on October 19th.

And as a special bonus, here is the first photo from what will be one of my most anticipated films of Autumn 2008, Spike Jonze's third feature (and at that point, first in six years), Where the Wild Things Are, the adaptation of Maurice Sendak's classic children's book. 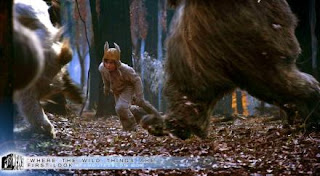