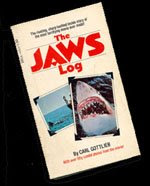 I just finished reading The Jaws Log, the behind-the-scenes production diary of Carl Gottlieb, Jaws' co-writer and co-star that was released in 1975 during the initial theatrical release. Gottlieb has a nice humorous self-effacing writing style and is candid in his honesty. Reading the book, a document of the filmmaking process of what would become the biggest film of all time (until Star Wars came out two years later) from gestation period to production snafus and ending not with the blockbuster release, but the successful test screenings, got me in the mood to rewatch Jaws for the billionth (?) time.

And this weekend I did; still great, one of my all time top ten films, blah blah blah. However, this time I noticed something that hadn't registered in any other of my countless viewings. It occurs during the credit scroll at the end of the film.

In case it's been sometime since you watched Jaws, after Brody kills the shark (whoops. spoiler!) Hooper pops up from hiding on the bottom of the ocean. The Orca is destroyed, so the duo swim back to land on the weight loading barrels that they used to bring the shark up to the surface.

"I used to hate the water"
"I can't imagine why" 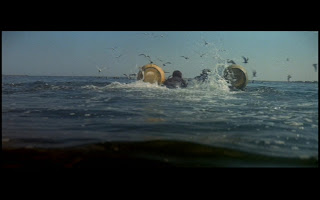 And cut to the credits over a stationary shot of the beach of Amity Island: 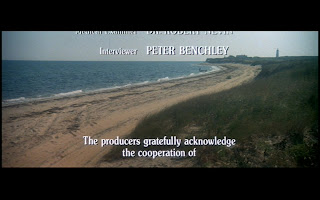 I like to think that I pay attention during the end credits of movies, but perhaps due to my reading of The Jaws Log beforehand and having greater knowledge of the crew of the film and their individual personalities I paid extra close attention (by the way, classy move by Spielberg to give both the special effects artist Rob Mattey who created the shark prototype and production designer (and future Jaws 3-D director) Joe Alves the first shared credit at the end of the film) and hey, what's that in the upper just right of center of the frame? It appears to be two people emerging from the ocean (click to see it larger): 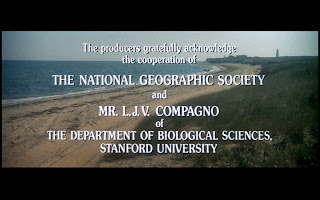 Wait, is that Brody and Hooper returning to dry land? It hard to see by still images, but when watched live, you can safely ascertain that there are in fact two moving bodies, but it's never clear as to who those bodies belong to. Knowing Spielberg's tendency to neatly tie up everything in the end of his films (ie the son surviving in War of the Worlds), my assumption is it's a nice bone to those who, like himself when he was a young cinephile, obsess and rewatch films over and over that our heroic duo make it safely back to shore and are not eaten by Bruce's wife or brother.

So my question, is this something that everybody is aware of? I don't ever hear it brought up in readings or discussion of Jaws. I've only seen the film theatrically once, so another viewing on a large screen would probably give a clearer answer, either way I am sure this was shot second unit without Roy Schieder or Richard Dreyfus.

Here's the final frame of the film, so you can decide for yourself. 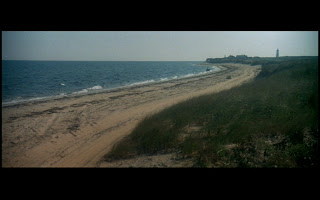 Posted by Colonel Mortimer at 9:02 PM

this is also probably my favorite movie ever and i never noticed this before. i cant really see it in these pictures but now that you mention it,i always wondered why he kept this shot up through the end credits and i think it would make sense. i will have to check it out again on my dvd. also could i borrow that book?

I can't believe you never noticed before. I noticed it when I was like nine on VHS.

so when i saw it at the theatre the other day its there, it pretty obvious WHEN YOU KNOW TO LOOK for it. i would have never seen it even on the big screen without knowing its there. i believe it is hooper and brody, maybe stuntmen but its them and thats cool.

do you think thats the lead singer from Tool? and he just didnt want to type his whole name?