The Movies Go to the Movies: Kentucky Fried Movie. But First a Rant 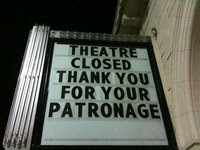 No two ways about it, the news for people who care about movie exhibition in Los Angeles the last couple of weeks has been devastating. LACMA announced it's cancelling it's wonderful weekend film series (if you haven't yet, please sign this petition to save the program ASAP), the Mann Festival in Westwood closed (with one silver lining: it's seats went to the New Beverly), followed by this report in the LA Times that Mann will not renew it's lease on either the Village or Bruin theatres when they expire next year, making their futures uncertain. Additionally, the Majestic Crest is still looking for a seller, and now the Grauman's Chinese Theatre, also currently operated by Mann, is on the sales block. I can't imagine the Chinese is in any danger of closing, and really Mann is a horribly run corporation that appears to be on the verge of dissolving, but the loss of these great one screen palaces that were de rigeur in the 60's-80's in favor of the impersonal mall multiplexes at Century City and Westside Pavilion (The Landmark is a fucking reprehensible step in a downward spiral of theatrical exhibition that is long over due for an evisceration by yours truly; alas another day) says a lot about the disposability of the theatre going experience in our modern short attention span times. Inevitable yes, depressing nonetheless, certainly.

Here's another article about the state of Los Angeles theatre exhibition, I'd like to take umbrage with something the anonymous "top indrustyite" says, specifically "you can't make a profit on a one-screen theatre", that's lazy thinking, which I guess is stock and trade for indrustyites, again I point you in the direction of the Vista, Cinerama Dome and New Beverly as exemplars of forward, personal and innovative steps to maintain relevance in the changing times.

To try to make myself feel better, I put on an old favorite, the John Landis directed Zucker-Abrahams-Zucker penned sketch comedy Kentucky Fried Movie. Unfortunately, to no avail, the constant barrage of dick, fart and boob jokes that I found hilarious in my younger days stuck me as strained today (not that there can't be good dick, fart and boob jokes, but they need to be more creative) and then early in the film I was reminded of another one screen theatre that has closed within the last two years, South Pasadena's Rialto Theatre, one of four to close in that period: the National in Westwood (another Mann theatre, natch), the Regent Showcase on La Brea and the aforementioned Festival being the others. 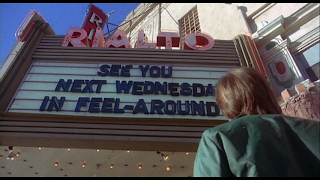 Closing in Autumn 2007, the Rialto was the last one screen theatre standing in the Pasadena area, owned at the time of it's termination by the Landmark chain, which was focusing all it's attention on the fucking Landmark and ruining a bunch of the historical architectural touches of the NuArt in Santa Monica at the time. It was suffering from years of neglect and even though it should've thrived in what is a small neighborhood feel in South Pasadena, it's bookings seemed directionless (the selections fluctuated between arthouse and blockbusters) and the decaying state was antithetical to the upscale neighborhood. 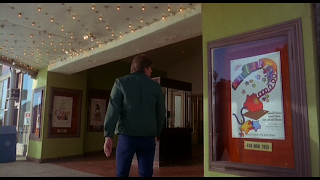 If you've seen your fair share of John Landis directed films, then you will know the film on the marquee, See You Next Wednesday, is his in-joke film within a film that appears in everything he directs--the Blues Brothers crash through a billboard for the film, it's on a marquee in a theatre in An American Werewolf in London--that was derived from a line of dialogue from 2001. 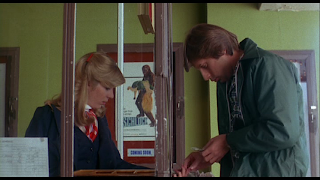 In another self referential nod, a poster for Landis' directorial debut , the Z-grade monster movie parody, Schlock, is in a poster frame and coming soon. 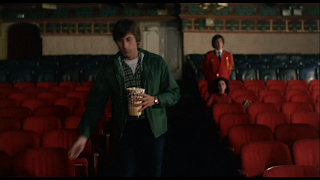 While the theatre is not in everyday operation, it has been showing some special one time only engagements, which it did last week (which I only discovered after the fact, damn it), when it had a special presentation of the 1971 motorcycle documentary On Any Sunday. Hopefully this is a sign of, if not a return to exhibition, at least more one-off screenings, and the good news is that is hasn't been demolished.

For more on the theatre, here's it's Cinema Treasures page.

Maybe they will bring back Feel-A-Round.

Posted by Colonel Mortimer at 9:30 PM

The "See you next Wednesday" joke appears in the video for Thriller as well: it appears as a line read out by a policeman (not seen on screen) in the movie that MJ is watching with his girlfriend at the beginning.