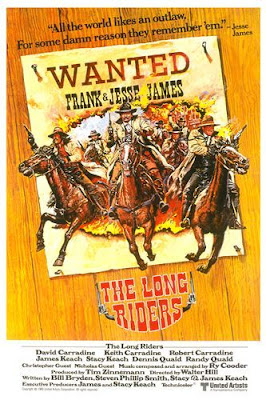 Part of the 1980's Project
"You're a whore. You will always be a whore. That's why I like you." - Cole Younger (David Carridine), The Long Riders
I open with this quote not just because of it's general awesomeness (self evident) but because it perfectly encapsulates not only Walter Hill's film based on the James-Younger clan, but his whole career, unapologetically dedicated to crafting smart genre fare straight forward in nature focusing on morally ambiguous lead characters. He, like John Carpenter, claims that every film he directs is a western to some extent, utilizing narrative and thematic tropes from the genre into such diverse film undertakings as buddy-cop (48 HRs), street gang (The Warriors) and Southern survivalist (Southern Comfort) films, but The Long Riders was, until 1995, Hill's only picture to be actually set in the Wild West of the 1800's, and it plays as an eulogistic tribute to the entire genre up to that point, covering aspects from such directors as John Ford, Sam Peckinpah and Sergio Leone, as if Hill knew the unfortunate decline in the genre in the forthcoming decade after a mini-resurgence in the mid 1960's through the 1970's.

Employing one of the more unique stunt casting coups in film history, The Long Riders features four sets of brothers performing as four sets of brothers: Stacey and James Keach (who also executive produced as co-wrote the screenplay) are Frank and Jesse James; David, Keith and Robert Carridine are Cole, Jim and Bob Younger; Randy and Dennis Quaid are Clell and Ed Miller and Christopher and Nicholas Guest are Charlie and Bob Ford. While this may come off as a gimmicky at first, in the film it provides strong resonance, especially at points when the clans break into inner factions amongst themselves, the true potency of the casting occurs during the final scenes where brothers have to decide to stay with their wounded blood relatives or flee for safety. As the quote I opened this review with shows, one of the film's major themes is acceptance of what you are, Jesse James is a bank robber despite his insertion into a stable married life and a Younger is a Younger no matter if their freedom is at risk.

When the episodic narrative of The Long Riders begins, the James-Younger gang is already well established. The film, which as I mentioned earlier is eulogistic in tone, is about the gradual dissolving of the gang and the first scene depicts the ousting of Ed Miller from the group after he over zealously shoots a bank teller. From there we intercut the actions of the gang with those of the Pinkertons who go to ruthless lengths to catch the outlaws. While an ensemble in many ways, the two characters who get the most attention are Jesse James and Cole Younger as the film compares the disparate ways the two men view the world and their position in it. For example, Jesse marries a humble staid plain woman, while Cole's closest relationship is with an enterprising prostitute, who he actually knife fights a man for her hand. Of course, after winning, he walks away from her.

James Keach provides an interesting if not entirely charismatic performance as Jesse James (probably purposely to contrast David Carridine's performance). As an actor its pretty impressive that he's willing to play James as such a fierce selfish cipher, but Keach is so low key here that I am not exactly sure what James' motivation or true feelings about anything are. Comparatively, Brad Pitt played Jesse James similarly in Andrew Dominik's 2007 film The Assassination of Jesse James by the Coward Robert Ford, but his natural charisma still surfaced, and since that film dealt with the cult of celebrity, it was added significance that he is one of the world's biggest star. In contrast, David Carridine as Cole Younger is the piss and vinegar filled heart of the gang and is enjoying himself at every moment where James' seems to be living up to the obligation of being a leader. It's two different methods to addressing the theme of self acceptance, Jesse feels burdened by his status; Cole enthusiastic. This is one of David Carridine's finer roles, and he takes to it with aplomb, he's also generously given the film's best lines including the opening quote of this article as well as a final vicious retort to Jesse James.

The score by Ry Cooder, performed primarily on acoustic guitars, matches the eulogistic tone of the film and lacks the bravado that we associate with the genre through classic scores of Ennio Morricone and Charles Bernstein. It's a beautiful score and Cooder's first, he and Hill would collaborate several more times. Hill also effectively cuts the score and focuses on diegetic sounds in two key sequences, the gang's vengeance against Pinkertons who killed a member of their family and the final shoot-out.

Starting with the spaghetti westerns there was a renaissance for the Western beginning in the mid 1960's, as the rating board was created a director like Sam Peckinpah was afforded freedom to amp up the reality of the era's brutality, and starting with Butch Cassidy and the Sundance Kid, the revisionist Western was born and flourished throughout the 1970's. For whatever reason, be it the failure of Heaven's Gate or the focus on fantasy films in the wake of Star Wars' historical success (ironic since it was conceived as a Space Western), the genre's presence was pretty much non existent through most of the 1980's, a trend that the mood of The Long Riders seems to have foresaw. However, the genre remains popular amongst filmmakers, and while I doubt it will ever return to the prominence it had in the 1950's, such recent films as the aforementioned Assassination of Jesse James... and the HBO series Deadwood (whose premiere episode was directed by Walter Hill) showed it's still fertile ground for addressing diverse modern concerns such as the celebrity worship, legend versus the facts and the role of governance.
Posted by Colonel Mortimer at 4:37 PM

This is one of my all-time favorite westerns, Colonel. This film and BROKEN TRAIL are my favorites among the obvious Walter Hill westerns (GERONIMO and WILD BILL would follow). That quote sure works for me as David Carradine and Pamela Reed would easily be listed as my top performances, here. Stacy Keach, too, as Frank James. I happen to believe James Keach was overmatched in this film and is the weakest of the main characters in comparison with the other brother sets. A fine review of a highly underrated western, Colonel. Thanks for this.