Film as Comfort and/or Therapy

As most of you are probably aware, since my last post here my wife and I suffered an unexpected loss that has been emotional draining and devastating, the news of which accounted for what as of this point is most certainly the worst moment of my life thus far. I am not the type of person to bare my soul on the internet, and actually find the filterless tell all nature that runs rampant on such sites as Twitter and Facebook so off-putting that I rarely visit them anymore. I don't know if it's the risible dominance of reality television that leads people to expound on mundane observances, petty grievances or politicking (even for viewpoints that align with mine) for all to read, but I guess I am more guarded than that. I don't mean any offense, and I realize I am the anomaly in this equation. So, if I am vague about certain details, please know it's because the pain is a little too fresh at this point. However, if you do know me, or even if you're a total stranger, hit me up with a personal message or email and I would gladly discuss it further with you in a one on one setting, be it email, phone or in person, and hell, in person I am just as liable to expound on mundane observances, petty grievances and politicking as everyone else, it's just my preferred forum.


While I am not a heart on the sleeve person, I do hope that this blog, though film centric, does provide the reader with a glimmer of my true self. Cinema is my passion and obsession, and I think if anyone pays attention to what I write they can (hopefully) devise that I am an open minded, non cynical person who is up for new experiences, be it film or, you know, "real life". I hope my sense of humor comes through, though I fear that it often gets muddled in my poor grammar laden and easily distracted writing nature. 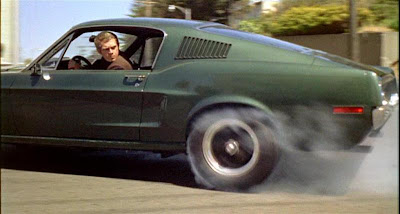 This whole experience as got me thinking about the concept of "comfort movies". If you look at my recently watched sidebar listing, you will probably notice it's pretty much my standard and (not to toot my own horn) eclectic fare. I guess watching a movie, any movie during the last two weeks has proved comfort enough that I did not have to delve too much into rewatching old favorites (though Bullitt definitely counts as an all-timer for me, however, I'd like to specify that that viewing was to show off our new TV and Blu-Ray player to my in-laws, one of whom is like me, a big Steve McQueen fan). That's not to say I don't have a certain number of films that instantly fill me with joy, but for one reason or another I did not indulge. For the record those instant joy films would be The Muppet Movie, A Hard Day's Night, The Good, the Bad and the Ugly and Pee-Wee's Big Adventure, to name the most prominent. I don't know if I have any grand statement to make about comfort movies other than to ask if once again, am I the anomaly here? When you have a hard day or get bad news or what have you, do you turn to an old establish classic, or do you, like me, find the same amount of comfort in your first viewing of a bizarre early 80's Canadian slasher movie featuring a gonzo performance from Michael Ironside as an apparent ADD suffering serial killer (that would be Visiting Hours, by the way)?

That's not to say I haven't been occupying myself with other distractions, chiefly, we purchased a new computer before anything happened and I have been uploading tracks from my old computer's iTunes and adding specific album artwork (a practice inspired by my friend Mike). While taking on this rather vast task, I have been listening to a wonderful podcast that I just recently discovered, The Gentleman's Guide to Midnite Cinema. Each episode runs nearly three hours, and begins with the hosts (Will and The Samurai) discussing the films that they watched during the week before discussing two pre-selected films in length, usually cult and B-movie fare (thus far examined titles included The Mechanic, Out for Justice and 1981's Possession), the show ends with caller and email feedback which usually leads to more tangent filled discussion of film. The Gentleman are witty, knowledgeable and passionate about a wide eclectic taste of cinema. They're respectful of others opinion and while the show can get raunchy, it's never offensive. Check them out at their website (www.ggtmc.com) or look for them on iTunes. If you like my website, you'll dig their podcast.

As for me, well, I plan to move forward with the blog, I have the rest of the Psycho series to finish, the long in the works 1980 Project, and hopefully some other treats in store. While I am not the most visited site in the world or do I get a lot of comments for that matter, I want to let you know I appreciate them and any feedback or constructive criticism. I mainly update this site for my own edification, so if I turn someone on to a new film or spur further discussion, that's an added extra. To bring this full circle, I guess you could say it provides some comfort to me to blabber on about film or share trailers and poster artwork I find interesting. Hope it does for you too.
Posted by Colonel Mortimer at 3:08 PM

I agree with you bro, during tough times or times when you just need a break it is good to be able to turn to a trusted movie to make you laugh or feel better. I hope this helps with the process, I am always here for you.

This Saturday both my roommates are out of town so I plan on watching a bunch of movies, email me if you have any recommendations.

I have my favorites, but "The Chase" starring Charlie Sheen and the original Buffy, Kristy Swanson, always brings me more joy than it should.

Rupert-thanks a lot for the plug! And I am an official ggtmc addict.

Heath--I seem to recall you having The Chase on VHS when we lived together, has it been upgraded to DVD yet?

Genial brief and this mail helped me alot in my college assignement. Thanks you seeking your information.