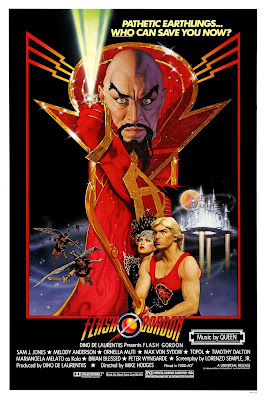 I was bound to have a relationship with cinema before I was even born. The night my mother was in labor with me, she and my father were headed to the drive-in to catch All the President’s Men. I must have decided that yes, I too, would be interested in catching Alan Pakula’s dramatic thriller. After my exit from the cozy confines of my mother’s womb, my parents would continue to go to the drive-in and catch double bills while I slept in the baby seat. The soundtrack to the movies emanating from those little speaker boxes serving as white noise that lulled me into dream land.

The reason I decided to embark on the 1980 Project was simply because it’s the first decade that I was alive and watching films for the entirety of. For those just joining us, the 1980 Project is my attempt to watch (and hopefully review) as many films from 1980 as possible, and then after a year (which is officially ending on December 31st, 2010), move on to 1981, repeat, then 1982, et cetera. My reasoning was not because it’s particularly a great decade for cinema, the 1970’s are easily my favorite decade for film, though I think it gets a bit unfairly maligned for some of the dreck that was successful (Flashdance, Top Gun), what’s interesting about the decade is that while the producer succeeded in grasping control of the medium from the directors after the 70's with an eye towards more easily sellable genre fare, there was a hell of a lot of good genre fare being made by directors at the top of their game who infused their films with commentary and unique sensibilities (Carpenter, Spielberg, Cronenberg to name but a few).
While I can intellectualize my reasoning for this project, ultimately everything comes back to December 1980. That is where and when my first specific memories of theatrically viewing films occurred. I don’t know for sure which I saw first (probably Flash Gordon since it was release a week earlier) but the first two movies I remember seeing theatrically were Flash Gordon and Popeye, I even remember the theatres in which I saw them: Flash Gordon was at the now defunct Century Town & Country, and Popeye the still existent Century 23 (side note: leaving the film through the back exit which provided the sight of seeing behind the screen whilst the credit rolled has always been an early indelible image for me).

Funny enough, I can’t think of two more symbolically appropriate films. They both represent the at times rocky sea change from the period of director focused cinema to producer (and eventually corporation) product that took place in the 80’s. Both films were probably produced with the intention of being aimed at children, but each are directed by idiosyncratic men who had no prior experience with family friendly fare. Flash Gordon with its bright color palate, campy pulp tone and intrusive (awesomely intrusive!) Queen soundtrack seemed like an odd project for British director Mike Hodges, who is most famous for helming the stark and influential Get Carter, a gangster revenge tale. Almost as odd as a big budget live action musical adaptation of the famous Elzie Crisler Segar comic strip by the notorious improvisational iconoclast Robert Altman.

Unsurprisingly neither film were the huge blockbusters there producers (Dino DeLaurentis and Robert Evans respectfully) imagined, although both were moderately successful money earners despite their current reputations. Both have garnered cult fans over the years, Popeye’s followers include writer-director (and admitted Altman fanboy) Paul Thomas Anderson, who wonderfully excerpted the song “He Needs Me” into his 2002 film Punch Drunk Love. While Harry Nilsson’s songs are catchy and Robin Williams and Shelley Duvall as the titular character and his devoted love interest remain serendipitous casting, the film felt like too much of a sludge the last time I gave it a look (about five or so years ago) where Altman’s sensibilities and the commercial aspect of the film never mesh either naturally or even in a sly satirical manner. The runaway production and perceived failure of the film lead Altman to mostly more intimate and theatrical based works for the remainder of the decade. And, I still feel I should give it another shot one of these days.. 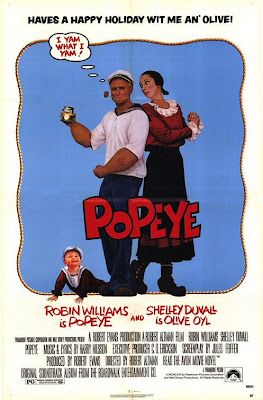 Flash Gordon, however, which I last saw theatrically as part of Shaun of the Dead director Edgar Wright’s The Wright Stuff festival at the New Beverly in December of 2007 worked like gang busters. Hodges embraces the comic book and serial origin with the film’s bright visual sensibility, not for nothing was it paired with Mario Bava’s Danger: Diabolik! Aided by a winking and funny script by Lorenzo Semple, Hodges intentionally makes Flash and his gal pal intentionally bland (Matt Jones, the actor playing Flash is dubbed) to subversively ramp up some of the more kinky elements of the proceedings. And while the leads are stiff, a supporting cast featuring fine over the top performances by Max Von Sydow and Timothy Dalton (channeling Errol Flynn), the seductive beauty of Ornella Muti and yes, the choral Queen soundtrack, always keep things at a lively pace.

Since December 1980 I’ve become obsessed with almost every aspect of cinema. The quality of the film being of tantamount importance of course, but I’m always intrigued by more than just that, including the behind the scenes story of what led to the final piece of work, how the film was shaped from conception to release, the advertising (posters, newspaper ads, cross promotional tie-ins and trailers) and even the theatrical experience of watching the film. Other films have had more of an impact emotionally or intellectually, but Flash and Popeye were the first ones to make their mark on me
Posted by Colonel Mortimer at 12:00 PM

Thanks for the post, I never knew these two movies had a bond with you. I cannot say I have seen either one (maybe Popeye).

Wonderful personal post, Colonel. You make a fine argument for celebrating that decade in film. And FLASH GORDON and POPEYE are a good representative pair. I especially agree with you thoughts concerning FG and the greatness of the supporting actors. Thanks for this.

Happy new year.Very nice.I can suggest you to join Whistling Woods International,if you want to turn your passion into profession.