So here's how this is going to go down, I will be posting brief to not so brief reviews of my ten favorite films from the year 1980 over the next five days. With the exception of this choice and my number one film, each post will have two films per article (for example tomorrow's post will be my 9th and 8th favorites).

Before we start, a little preamble, these are purely personal choices and not representative of some overall consensus of what the best films of 1980 are, I have no interest in that, and besides that's what the Academy Awards are there for. Speaking of Mr. Oscar, two of the five Best Picture nominees for 1980 make my list, but not the winner, Ordinary People (a film I run lukewarm/negative on).

I would like to dedicate this list to two men who passed away recently and whose work will be featured in this list (one very soon): Leslie Nielsen and Irvin Kershner. 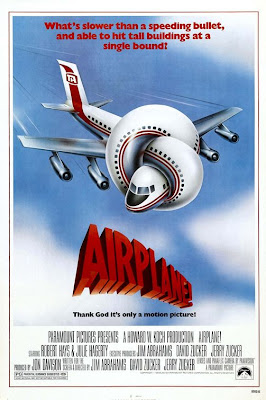 “Do you like gladiator movies?” “And don’t call me Shirley!” “I picked the wrong week to stop sniffing glue!”

Out of all the films on the list, the most quotable and the one I’ve watched the most times is easily Airplane! My last viewing was also my first since actually seeing the entire Airport series, which the ZAZ boys mercilessly satirized (along with the film Zero Hour), adding a new level of appreciation to my enjoyment.

While not the first of its type, its wild success led to a glut of (mostly awful) parody films that have popped up in its wake. Try as they might, those imitators, which in our ADD culture have been going strong again the last five or so years, what with the name check as many popular films and internet memes cinema of the likes of Epic Movie, Date Movie, Meet the Spartans and the Scary Movie franchise (some of which are depressingly even directed by Jerry Zucker himself) never match the wit and hilarity of it.

While that old adage about having to explain humor taking away from its impact is true, there needs to be some discussion of why Airplane! endures thirty years on, while most of the works of, say Seltzer-Friedberg, are already stale by their release date: namely a fidelity and focus on a specific target, the disaster film of the 70s in this instance, with an understanding of the structure, the tropes, etc, that are then completely dismantled coupled with a clever ear for language that twist well known clichés into subversive and hilarious results. Sure direct references are made to then current popular culture (Jaws, Saturday Night Fever) but those are jokes within jokes, not just lame name calls.

The other brilliant stroke, and soon to become cliché itself, the ZAZ boys conceived of was casting well known, dramatic actors past their prominence, and having them deliver everything as if it was a serious drama, the cast in this instance includes Leslie Nielsen (who reinvented his career and became a rock for the trio), Peter Graves (who admitted to never getting the whole concept), Robert Stack and Lloyd Bridges.

Thirty years later, Airplane! is still the standard by which we judge these types of satirical comedies, and don't start up with your white zone shit again.
Posted by Colonel Mortimer at 7:00 PM

A great starting point to the list. I would say this is easily one of my top comedies of all time. I cannot wait to see what comes next.

Still one of THE FUNNIEST movies... EVER. Fantastic selection. Thanks, Colonel.