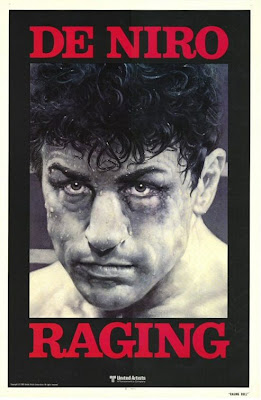 Long touted as the “best film of the 1980s” Martin Scorsese bifurcated telling of Jake LaMotta’s rise and fall, the boxing scenes are dazzling displays of full tilt cinematic formalism, his non-fighting life comparatively stark and bland, full of hand held Cassevettes-esque shots, Raging Bull is no doubt a monumental achievement, but honestly, there’s other Scorsese films I value more, and this is my list, and I am trying to be honest with the placement of the films on it, so, your miles may vary.

That said, it is excellent, and screenwriter Paul Schrader’s and Scorsese’s depiction of how a man borne of and career dependent on violence inevitably is unable to turn off (or pull any punches if you are feeling puny, har har) these instincts when out of the ring uncomfortably burrows its way into the viewer's psyche. And Robert DeNiro’s Jake La Motta is perhaps a career best performance, something remarkable considering his career is full of iconic characters like Travis Bickle, the young Vito Corleone, Rupert Pupkin, Al Capone, Jimmy Conway and the dad from Little Fockers. 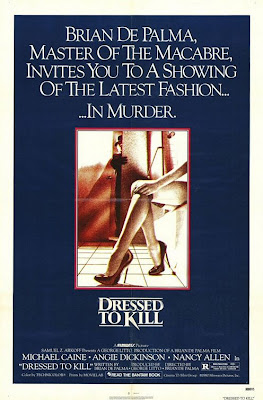 I have a little saying “There are those that love Brian DePalma’s trashy highly stylized thriller Dressed to Kill and those that hate cinema”, I know it’s cheeky (and probably not entirely accurate) and I imagine a certain segment of critical circles would probably scoff at me placing the film above such a landmark as the one at number five, but I gots to be honest, and honestly, I get a contact high, a cinematic joie de vivre each and every time I view Dressed to Kill that leaves me giddy, and should you put it and Raging Bull in front of me and ask me to choose, sorry LaMotta.

With giallo and Alfred Hitchock’s Psycho as inspirational starting points (and please if you are one of those “all DePalma does is rip off Hitchcock” people, kindly find someone else to annoy), DePalma crafts a darkly comic (and frankly, sometime mean spirited) thriller rooted in sexual hang-ups and voyeurism. This is best cemented by the opening dream sequence, which in and of itself was a serendipitous occurrence as Angie Dickinson refused to do a nude scene. Therefore, when the middle aged housewife (Dickinson) fantasizes herself having sex in the shower, the supple body of the much younger body double replaces reality, serving as a reminder of how one prefers to imagine themselves.

DePalma uses every cinematic trick in the book: split diopters, long, deliberate tracking shots and slow motion that extends a murder scene that would be about ten seconds in reality to about three minutes of film. Style over substance? No, it’s style as substance. Cinematic reality over the real world. And yes, I wouldn’t have it any other way.
Posted by Colonel Mortimer at 7:00 PM

It's great to see DRESSED TO KILL make it here, Colonel.