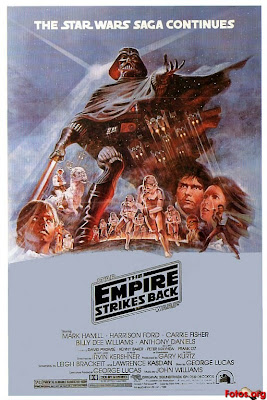 Full disclosure: every one of the films on the Top Ten list have been viewed (or rewatched) within the last two years, with one exception: this film. The last time I did see Empire, however, was of symbolic significance. It was spring 2004 at a theatrical screening held at the Arclight. The title of Episode 3 (in case you blocked it out of your memory, that title was Revenge of the Sith) had just been announced, and the theatre was packed with people (mainly late 20 to mid-30 something males) with bootleg t-shirts featuring the upcoming finale’s title using the font from the original title of the third film (er, episode six): Revenge of the Jedi. The buzzing pre-film excitement about the sure to be excellent sixth film (er, episode three) was palpable. This despite the fact that the first two prequels were, well, less than expected to put it kindly. While I wondered why the lack of cynicism or at the very least more measured expectations, I realized the reason for the high hopes were because of the film we were about to watch.

Sequelizing the highest grossing film of all time provides more than a few obstacles. But creator-producer George Lucas’, who was so burnt out by the process that he handed the directorial reins to his college professor, Irvin Kershner, follow up to Star Wars was more Godfather part II than Jaws II. The pacing is tighter, the themes more fully developed, Empire bests the original film in most aspects. Lucas’ love of cliff hanger serials resulted in a shocking denouement which saw our two main protagonists at a crossroads, one now embedded with life altering information, the other a statue for a slovenly loan shark.

Out of all the films on this list, this is the one whose placement led to the most internal debate. Do I discredit the film for the blahness of the prequel films giving me a serious case of Star Wars phobia? Do I pay extra credence to it since next to Airplane! it’s the movie on the list I’ve seen the most times in my life? When preparing this list, I had it placed as high as three and as low as nine. Ultimately, I am happy with it here at lucky number seven since the next six films always bring something to the table with each viewing as oppose to Empire, whose pleasure I’m pretty sure have been completely exhausted. Still, when I look at the state of modern blockbuster sequels (Iron Man 2 and Tron Legacy are the first that come to mind) I see failure where Empire succeeds. Empire expands the universe introduced in the first film and gives its characters challenges related to their past that provide depth whereas the two more recent efforts mentioned replace these elements merely with more characters and bigger budgets. 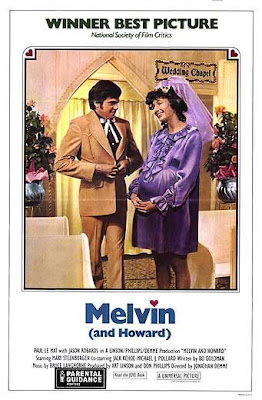 Whether or not you believe that Howard Hughes left 1/16th of his fortune to Melvin Dummar after he picked up the reclusive billionaire hitch-hiking (for the record director Jonathan Demme and screenwriter Bo Goldman proceed as if Dummar’s story is factual) is inconsequential. Demme’s hilarious yet humane comedy is more interested in contrasting the two flawed men, both prone to flights of fancy, rebellious gestures, doomed relationships and selfish grand acts, yet financially as disparate as possible, where Hughes owns his own casinos, movie studios and airlines, Dummar was a frequent mark for repo men.

Paul LeMat and Mary Steenburgen give career best performances that wonderfully balance being fully realized people and comedic foils, while Jason Robards in what is essentially a 15 minute cameo as the peculiar Hughes leaves an impression that permeates through the rest of the film. However, the star of the film is director Demme, who after a diverse decade of filmmaking that included being a director in Roger Corman’s exploitation production house, helming a woman in prison joint, a CB radio comedy and a Hitchcock inspired thriller, finds his thoroughly distinct voice, like Sam Peckinpah with Wild Bunch, Quentin Tarantino with Pulp Fiction and Wes Anderson with Rushmore, Melvin and Howard represents a turning point in the director career for which rhythms, tropes and themes that would reoccur later completely culminate.
Posted by Colonel Mortimer at 7:00 PM

wow a classic movie bested by Melvin and Howard...wonder what 5 other movies were better...

Well these are only my view of things, so "better" is not necessarily the case, just preferred, and for the record I think Melvin and Howard's a classic too!

Excellent selections. These really stand out for 1980. I still remember seeing THE EMPIRE STRIKES BACK at a 5:30 AM showing (at The Egyptian Theatre, mind you) come the Monday after its multiple day, round the clock opening... then head off to work. Still memorable. Thanks, Colonel