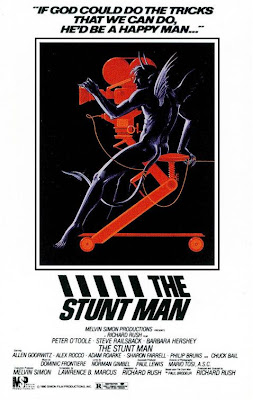 On the lam from the cops, a petty criminal (Steve Railsback) hides out as a stunt man on the film set of a World War II epic, where he’s able to reinvent himself at the price of his sanity, as a ruthless director (Peter O’Toole, wonderful here), who appropriately enough is presented on the poster in silhouette with a devil’s tail, takes advantage of the situation and makes the newly anointed stunt man pay for his sins via elaborate death defying stunts and tests of his mental fortitude.

Richard Rush’s clever comedy plays with our perception of reality and is a tribute to the magic, and inherent madness, of cinema. 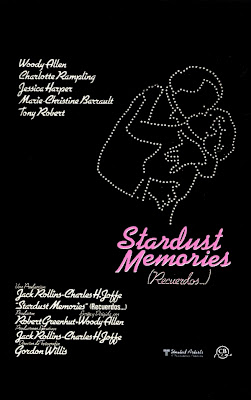 Very much a transitional film for Allen, it was his final for United Artists before jumping ship to Orion, and a declaration of his intentions to continue to tow the line between comedy and drama in the upcoming decade, and indeed, the 1980s were a potent decade for the writer-director rife with experimental formal exercises and quality results (Zelig, Broadway Danny Rose, Purple Rose of Cairo, Hannah and Her Sisters, Another Woman, Crimes and Misdemeanors).

Woody Allen’s 8 ½ inspired film angered some of his long time followers who felt insulted and slighted in being depicted as narrow minded and change phobic, but Stardust Memories' satirical edge is equally sharp in its portrayal of director Sandy Bates(Allen) ‘s pretensions.

Amongst the satire are some very interesting and pertinent questions about the relationship between artist and consumer, and who is or should be answering to whom.
Posted by Colonel Mortimer at 7:00 PM

I still love Rush's THE STUNT MAN after all these years. STARDUST MEMORIES less so (but I wouldn't be considered a big Woody Allen fan). Looking forward to your next selections, Colonel.