Astute readers may have noticed that my Top 10 and Honorable Mention lists for the 1980 Project was missing the Robert Redford directed Academy Award winning Best Picture, Ordinary People. Personally, I find the movie extremely average, outside of some good performance by both Timothy Hutton and Donald Sutherland, it plays to me like a more prestigious TV movie of the week than cinema. In fact, Ordinary People is one of the earliest examples I have where an adaptation of a novel yielded disappointing results. When I read Judith Guest’s book as a sophomore in High School it held a strong emotional wallop for me, I was the product of a divorced marriage, and I found a lot in the book relatable to my experience. No, I was not the product of a upper class upbringing, nor did I have a deceased sibling or ever saw a psychiatrist for that matter, but the ways the two parents subtly and not so subtly tore each other apart, the acceptance of the failings characters have to address and the ways the Conrad Jarett character rebels struck a familiar chord. I saw none of the depth of character or anything beneath the surface of Redford’s bland direction (seriously he beat Lynch and Scorsese?), and while she’s a prenatally gifted comedic actress, Mary Tyler Moore’s Mommie Dearest routine, with the requisite “for the Academy” breakdown never congealed to anything besides histrionics. A few years ago, with the novel not so fresh in my mind, I gave the film another watch, and I still held the some opinion.

Not to show my hand too early, but don’t count on seeing the 1981 Best Picture Chariots of Fire in my Top 20, or looking ahead to 1982, probably no Gandhi (great man, standard bio-pic). In fact a quick perusal of all the Best Picture winners for the 1980s, I can only see maybe two or possibly three making my personal list (in full admittance, I’ve never seen Out of Africa), and that my friend is the Academy Awards in a nutshell. Rewarding films that at that moment in time fulfill a sense of some importance whilst audience friendly (re: unchallenging, see this year’s winner The King’s Speech, a solid if unspectacular film that hits all the notes) usually results in films that (in my opinion, as if that qualifier is needed) don’t necessarily stand the test of time. Sure some great films have won the Best Picture statute: The Godfather (parts I and II), Lawrence of Arabia, Annie Hall, Casablanca, and two of the last four winners (No Country for Old Men, The Hurt Locker) actually place in my top five for their respected years, but those are the exceptions to the rule. It’s the nature of the game and I have long ago accepted this, probably at the age of eight when neither Cloak and Dagger, Ghostbusters or Gremlins managed to secure a Best Picture nomination. Getting upset about the Oscar results is as useful as getting angry at the Westminster Dog Show winner.

The two films I am looking at for today’s 1981 Project accrued a total of 16 Academy Award nominations and 3 wins. Both have their strengths and weakness, and par for the course, I am fairly certain neither are revisited heavily by today’s cinephiles. 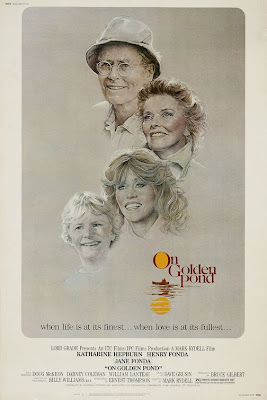 A long traditional Oscar tendency is to bestow an actor with a late career award for a lesser film as a mea culpa for that actor being neglected throughout their career. This means that Paul Newman’s only Best Actor Oscar is not for The Hustler, Cool Hand Luke, Hud, or The Verdict, but 1986’s The Color of Money; and Al Pacino’s satire worthy performance in Scent of a Woman netted him the reward that neither the Godfather part II, Serpico or Dog Day Afternoon did. A similar egregious example of this is Henry Fonda, who’s Academy Award is not engraved with the title of The Lady Eve, The Grapes of Wrath, The Ox Bow Incident, My Darling Clementine or Once Upon a Motherfucking Time in the West (to name a few), but for his final performance in the Mark Rydell directed adaptation of Ernest Thompson’s play On Golden Pond, or as I like to call it “Elderly People say the darndest thing!” Watch as an octogenarian Fonda repeatedly uses the word “bullshit”! Amaze as Katherine Hepburn goes skinny dipping! Aww as Fonda and Hepburn, in the parlance of the day, “suck face”. To paraphrase Homer Simpson, it’s funny because they’re old! Too bad Fonda didn’t live another few years, otherwise with the mainstream success of rap, they could have inserted him breakdancing into a special edition rerelease.

Fonda and Hepburn are a retired couple, vacationing for the summer in Lake Golden Pond as Fonda prepares to turn eighty. For his birthday the crotchy, yet oh so loveable, Fonda is visited by his estranged daughter (Henry’s real life daughter Jane Fonda), her new boyfriend (Dabney Coleman) and his thirteen year old son (Doug McKeon). Wanting some alone time, the younger couple leave the teenager to stay with her parents for a month. I am sure if you’ve ever seen a movie before, you can predict that after a few cultural (the elders are from upperstate New York, the younger from Southern California) and age based confrontations, the teenager and the senior citizen, both marginalized by society, form a tender bond.

On Golden Pond is a film of very meager scope, and after it gets over its base stereotyping in the establishing of its character’s traits, it finally settles into a nice rhythm, and though predictable as it may be, the relationship between Fonda and McKeon is the best portion of the film. But when more dramatic arcs are introduced into the film, most notably the rocky relationship between the Fondas, the film completely botches what, considering the true life relationship between father and daughter, should have been its strength. The issues that drove a wedge between them never feel fully form, and reconciliation is far too easily reached. The film is similar to the experience of watching a community theatre production with four ringers in the leads, even if Jane, who gets ample opportunities to show off the fruits of her Workout videos labor by wearing swimming suits multiple times, doesn’t bring her “A” game. With one or two exceptions, Rydell is satisfied to just point and shoot the actors with limited movement, adding to the “filmed play” feel.

As is often the case, prognosticators did not value the potential pull for older audiences, and On Golden Pond was produced and release by the small distributor ITC, where it became a big blockbuster in the winter of 1981-82 (earning over 120 million dollars and the second highest grossing American film released in 1981!). It was nominated for 11 Academy Awards including Best Picture, Best Actor (Fonda), Best Actress (Hepburn) Best Adapted Screenplay, Best Supporting Actress (Fonda) and Best Director, it would win three, for its screenplay, Hepburn and yes as previously mentioned, Henry Fonda, who would pass away within a year, on August 12th, 1982. 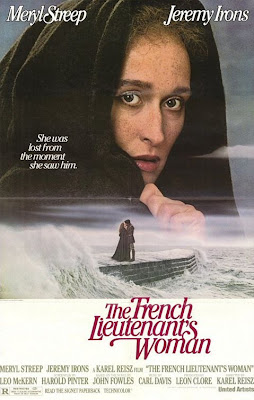 Warning: While not necessarily a spoiler, there’s a central narrative conceit that I am going to reveal here, it’s introduced about twenty minutes into the film and it’s hard to discuss further without it, but since I went in fresh, you may like to do the same thing shall you ever visit the film.

Director Karel Reisz’s adaptation of John Fowles novel, The French Lieutenant’s Woman, opens with a slate announcing the title of the film, and a long single tracking shot as Sarah Woodruff (Meryl Streep) the titular woman looks onto the edge of a pier rife with crashing waves, waiting for a ship to bring forth her missing paramour. Addressing the artificiality of the filmmaking process is something that one expects from Jean-Luc Goddard or Robert Altman, but not this, a prestigious literary adaptation. Shortly the reason is revealed as there are two simultaneous narratives: one is the story of a love affair between an engaged scientist (Jeremy Irons) and Woodruff, who’s been chastised as a harlot by society’s upper crust in 19th Century England; the other is set in modern day, concerning the two actors playing these characters in the film French Lieutenant’s Woman, who are having an adulterous affair with each other.

The notion of the effect on their own reality that actors playing such passionate characters experience is compelling, however, the split storyline actually dampens the effect on both. The switch could be more organically inserted, and leads both portions to lose their story’s momentum. The film’s major problem is that the fictional story is more interesting and better developed, but once we know that everything in it is preordained and of no serious consequences, the viewer’s interest cannot help but wane. The modern day love affair seems to have little of the same risks—career, financial and societal ostracization—that their fictional counterparts have, and lower stakes here leads to lower interest.

The actor/fictional character diptych was the invention of the film’s screenwriter, noted playwright Harold Pinter, who had to find a unique way of transforming Fowles’ novel approach of giving the lovelorn couple three different potential outcomes and having the author himself appear, to a film script. The pull that actors may have when they delve deep into their characters and their relationships, and the way fiction can provide endings that reality never could, are interesting aspects raised in the film, but unfortunately, often at the expense of the actual narrative.

French Lieutenant’s Woman was nominated for five Academy Awards: Best Actress, Best Art Direction, Best Editing, Best Costume Design and Best Adapted Screenplay, but lost in all five categories. This was Streep’s first nomination in the Best Actress category, she was nominated for her Supporting work in both The Deer Hunter and Kramer Vs. Kramer (for which she won). She has been nominated a grand total of 16 times, in fact, I believe there’s a movement to have the name of the ceremony change to the Streepies, the record and four more than Katherine Hepburn, who actually beat her in 1982 for her performance in On Golden Pond, which also took home the Best Adapted Screenplay honor. For what it’s worth, I think French Lieutenant’s Woman is the superior film.

Posted by Colonel Mortimer at 7:35 PM

Excellent look at these three films, Colonel. You and I are in agreement regarding ORDINARY PEOPLE. I think I've seen it a total of 1½ times (I couldn't finish it the last time). ON GOLDEN POND was a pretty naked push to right a wrong by The Academy. And I tended to ignore Streep in her early work (probably because so many people talked her up back then), until SOPHIE'S CHOICE, that is. But, I should take another look at FLW. Thanks my friend.

Love this blog. Just found it... I love Ordinary People- MTM nails it so well, a nice contradiction to her tv persona of being warm and funny. I've known people like her, refuse to deal with reality, instead create their own and turn off the emotions. They were control freaks. Losing control was worse than the death itself... Works for me.