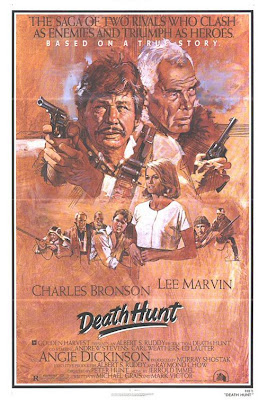 Is there a more appropriate visual metaphor to open a film starring Charles Bronson and Lee Marvin in 1981 than with a vicious bloody match between two mangy dogs, specifically a pit bull and a white German Shepard? At the age of 59 (Bronson) and 57 (Marvin), and never really handsome in the generic “matinee idol” mold to begin with, had seen their weathered and wrinkled faces proudly suggested the hard living off-screen one would like to associate with their on screen personas. Death Hunt (1981, Peter Hunt) gives the duo a forum to prove they still had leading men chops. It’s a decent yarn that moves (what one once may have referred to as a “programmer”, though I don’t think of that generally in negative terms), but I couldn’t help but see potential for exploring more resonant themes or that an even more potent film could have resulted out of the existing materials.

It’s 1931 in the Yukon but you wouldn’t be entirely remised to think it’s actually 1831, seeing how the snowy village is still completely unpaved, and transport is purely via horse drawn buggy. Trapper Albert Johnson (Bronson) is returning home to his log cabin in the middle of the desolate woods when he comes upon Hazel (character actor favorite Ed Lauter) fighting his dog against another asshole’s dog in a death match. Seeing the pathetic state of the dog, Johnson kicks some ass, and buys the dog off of Lauter for $200. Considering he was about to shoot it himself, that’s a pretty good deal I’d say, but Lauter is an asshole (natch, the motherfucker’s engaging his dogs in fights), and since he’s publicly humiliated in front of his cronies (amongst them William Sanderson and Len Lesser (Uncle Leo!), he takes it up with the local Mounties, claiming that his dog, who let me reiterate he was about to cold-bloodily kill, is worth at least a thousand dollars. Edgar Millen (Lee Marvin) is the grizzled veteran Mountie, and has no interest in petty claims, so despite the suggestion of rookie Alvin Adams (Andrew Stevens) that they investigate matters, he’s of the “shit will work itself out” mentality. Well, shit just goes from bad to worse, as Lauter and his cronies ambush Johnson at his cabin, and kill the now healing dog, but Johnson, as one would expect from a Bronson character, is a heavily armed militia type and takes out one of the crew.

So of course now Marvin has to get involved. Trying to be the mediator he attempts to convince Johnson to come with him and let legal avenues sort out the mess before anyone gets hurt, he even personally insures that Johnson will be back in his cabin writing his anti-ham radio technology manifestos in three days. As he’s about to decide, one of Lauter’s gang take a shot at the open man, and Johnson ain’t going for that, so a full on Waco type stand-off ensues. The manhunt compounds after Johnson survives the dynamiting of his cabin and extends to the wilderness as Johnson heads to the Alaskan border where I am sure his down home whimsical habits like curing his own homemade jerky would make him a local hero, and the number of pursuers multiple as a bounty has been offered for his head, meaning anyone with a firearm (and remember this is the Yukon in 1931, so everybody’s packing) wants the reward money.

Director Peter Hunt got his start in editing, including many of the early James Bond films, before making his directorial debut helming the sole George Lazenby starring Bond sequel, On Her Majesty’s Secret Service (which may have an at times ineffective actor in the lead, but is a very solid Bond entry). Editing is definitely his strong suit, as Death Hunt hums along at a great pace. The snowy on location shooting lends itself an appropriate desolate environmental atmosphere that is foreboding and aides in the suspense. However, one major flaw in Hunt’s visual scheme is his reliance on shooting action scenes primarily in medium shots. Since it’s a chase film with a heavy emphasis on stand-offs, this ruins their effectiveness as the hunter and huntee are never really composed in the same shot. While it may be more practical from a filmmaking stand point (actors don’t all have to be there at the same time), it makes the action, the driving force of the film, ultimately mundane. Towards the back end of the film, there’s a moment where an airplane chases after Bronson flies low and we see both man and machine in the same frame, and it’s a revelation after the more muted style employed previously.

An overriding theme in the screenplay by Michael Grais and Mark Victor is older men addressing and resisting impending changes. Bronson and Marvin’s character are firmly entrenched in their ways (Bronson—isolated living; Marvin—the policy of letting matters work each other) that leads to explosive conflicts when presented with fluctuating times and attitudes. As previously mentioned, for a film set in 1931 the town and technology is more representative of Westerns set in the prior century, which makes the sight of a ham radio or airplane glaringly stand out. While I am always one to appreciate scripts that don’t explain everything point blank or lazily rely on expositional dialogue in attempts to create a more developed character, allowing the viewer to figure things out for themselves or (gasp) use their imaginations, I do think the lack of any evidence of the men that Bronson and Marvin here proves a misstep. We get a brief glimpse that Bronson’s father has passed away, and Marvin is still sleeping with the one that got away (Angie Dickinson in a nothing role), and through their brief interactions we gather they at least know each other, but anything more tagential is never inferred. Since Marvin is eventually faced with a major decision that seems to hinge on an emotional connection (as well as the old school shared characteristic), this lack of a connective strand weakens the impact (though in fairness this decision is alluded to subtly with the fate of the two dogs at the film's opening). While most films will come up lacking when compared to the work of Sam Peckinpah, I think Death Hunt would've be served to explore the dichotomy-of-men themes he mined frequently between his two protagonists that often found themselves on the opposite side of a cause. One other minor complaint, we all like to see Bronson kicking ass and blowing deserved punks away, but I wish by this point that perspective could be skewed a bit to question his morality, however, in the scene that kicks off the conflict, he’s essentially let off from any moral quandaries as one of Lauter’s crew kicks things off by taking a free shot at him.

In one way, this was a landmark film for Bronson, it would be his last film of the decade not to be released through Cannon studios, instead co-produced by James Bond series producer Albert S. Ruddy (probably explaining Peter Hunt's association) and Chinese studio Golden Harvest and distributed by 20th Century Fox (similar to The Cannonball Run). My comment about a lack of connective tissue between the characters portrayed by Bronson and Marvin is ironic considering how many connections from the past and future cinematic collaborations exist through the primary cast and crew of Death Hunt. Obviously Bronson and Marvin famously comprise 1/6th of the Dirty Dozen and this marked the third Dickinson-Marvin connection after Point Blank and The Killers. Additionally, Bronson and director Hunt would reunite for the 1987 silly but not entirely unentertaining Cannon feature, Assassination, and Bronson would also share the screen in the future with two co-stars here, Ed Lauter in Death Wish III (where they eventually would be blowing up punks together) and future soft-core superstar Andrew Stevens, who he would face of again in the sleazy (and awesome!) 10 to Midnight.

Posted by Colonel Mortimer at 11:45 AM

Fine and fun film review, Colonel. Death Hunt remains an entertaining, if not great, action flick. And the veteran cast really helps make this happen. I agree it had the potential, especially with Lee Marvin and Charles Bronson as the leads, to really have been more. Still, few films were manlier. Thanks.