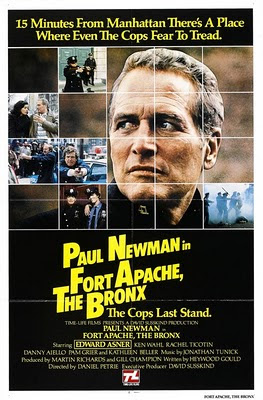 A prototype for the police dramas that would proliferate in television (e.g. Hill Street Blues) shortly after its release, Fort Apache, The Bronxis a scattered drama focusing on the work and lives of a small precinct of police officers that addresses the relationship they have with the community, and how tenuous it is. It’s an ambitious if not fully realized film with a lot of social issues addressed and dramatic character events and decisions. Director Daniel Petrie and screenwriter Heywood Gould don’t always keep their juggled narrative balls from dropping to the ground and often favor cliché and underlining their point rather than a more realistic and subtle track. There is a lot to recommend though, beginning with a solid cast lead by Paul Newman and Ken Wahl, strengthened by good character actors in supporting roles (Ed Asner, Danny Aiello, Rachel Ticotin, Pam Grier, Paul Gleason and Dominic Chianese amongst other familiar faces) and the great location shooting in the South Bronx, which provided a great general ambience of late 70’s/early 80’s Bronx essence--destroyed rubble of old apartments, dilapated buildings, litter in every free space, and overall sense of post-apocalyptic dread.

Officer Murphy (Newman) is a veteran beat cop who can never leave his opinion to himself, which cost him a chance at a promotion long ago, his partner and friend Corelli (Wahl) has all the ambition and style that Murphy lacks, he wears leather jackets and you can imagine him as a version of Saturday Night Fever’s Tony Manero who grew up going to discos and had a Al Pacino/Serpico poster on his bedroom wall. They work at a precinct in the South Bronx that has been dubbed Fort Apache for the fact it’s considered the only safe haven for the non-criminal element of the neighborhood, which according to this film is a small percentage (similar to 1980’s Cruising which had an opening crawl explaining that the film is not a reflection of the entire gay community, Fort Apache’s crawl informs us that not everyone in the Bronx is a hardened criminal). Murphy and Corelli and the rest of the cops of Fort Apache seem to have an understanding relationship with the various miscreants in the area, yeah it’s okay to be a pimp, just don’t slap your prostitutes in the public’s eye or go ahead and do heroin, just try to buy good stuff that won’t lead to an OD, that sort of understanding. But two occurrences alter everything. First, a strung out prostitute (the still stunningly beautiful Pam Grier) is on a killing spree, which included a couple of rookie cops, all while the command of the station is being shifted from the exhausted and lax in rule enforcing Captain Dugan (Sully Boyar), who gets the film’s best written piece of dialogue with a David Mamet-esque rant about the lengths to which the system is broken, to the more serious and stat conscience eye of Captain Connelly (Asner). Connelly will not tolerate the existence of a cop killer in their borough and provides an incentive to his officers that leads to mass arrest, rioting citizens and cops using excessive force, including murder.

Overall I give the film a pass, but it’s frustrating because there’s a lot of promise that goes unfulfilled and the film easily gets distracted from its strengths. The film is based on the real life accounts of two police officers, and it seems like Petrie and Gould attempted to cram a lifetime of experience into a film that takes place over a couple of weeks. The murder of the two rookie cops is the impetus that drives much of the action of the film, however, for the importance it’s given, it’s pretty much forgotten about by the police department. Don’t get me wrong, I like its ultimate resolution (without giving too much away: the cops never solve the case), however, it just no longer seems to be a big deal, even to the Captain, despite bookending the film’s opening and closing scenes. It’s replaced with an awkward cop killing an innocent citizen subplot which is poorly executed and never compelling. Seeing how it came out the same year as Sidney Lumet’s Prince of the City, an excellent film that dedicated nearly three hours to the emotional and personal strain that a cop revealing the corruption of a New York precinct goes through, Fort Apache’s meager depiction can’t help but feel lukewarm. Screenwriter Gould and director Petrie also apparently have no trust in either their two main actors (a shame since both Newman and Wahl do good work here) or the audience, and often have their cops explicitly state their objections, opinions and thoughts in the most obvious, exposition underlining manner possible.

My favorite scene occurs when the precinct methods shift sharply, and officers start arresting any suspicious person in their effort to catch the cop killers. The thin line of acceptance of certain misdemeanors evaporates and the citizens feel betrayed. In a scene that feels especially prescient in light of the interaction between police and protestors at the Occupy protests, an all-out riot clashes and the police quickly, and somewhat cathartically (for them) turn to excessive force, beating and hosing the protestor, many of whom were the same constituents who would loiter in front of the precinct. I wish the film would have spent more time focusing on this relationship between the cops and the bureau they police and the reality of their coexistence in one of the more economically devastated portions of the country instead of tackling too many “hot issues” like crooked cops and drug addiction.

Fort Apache performed well at the box office at a time when Paul Newman needed it. His last two films were box office disasters; the Robert Altman directed Quintet and the inane Irwin Allen late entry in the dying disaster film genre, the volcano based When Time Ran Out, a film so bad and in which the charismatic actor was such a non-entity, Newman issued an apology for his performance. Here he seems to be upping his world weariness, and accepting his age, something that would pay huge dividends through the rest of his career, including one of his career best performances only a year later in Sidney Lumet’s The Verdict. Paired with his acting idol Newman, Ken Wahl, displays an easy and affable presence, he would go on to be the lead in the influential television series Wiseguy, before an injury sustained in a motorcycle accident would cut his acting career short in the early 90s. The Bronx which saw certain neighborhoods lose up to 97% of their buildings to fire and abandonment in the 70’s and early 80’s, is still one of the poorest districts in the US, it’s the home to the New York Yankees, and the economic situation of this era gave birth to hip hop music.

Posted by Colonel Mortimer at 10:19 PM

Fine look at this one, Colonel. FORT APACHE, THE BRONX did have promise, but came up short. Highlights for me are Newman, Grier, and watching Wahl begin to mold his Vinnie Terranova. Glad to see you mention two of my fave Sidney Lumet works in your review, PRINCE OF THE CITY and THE VERDICT, as well. Thanks for this.

I support your idea very much and here is a good choice for you no matter what mood you are: just remember to pay attention to the fashion trend of New Hermes bags such as Hermes Kelly Birkin or the other style of cambridge satchels or cambridge satchels bags. I promise you will relax yourself.