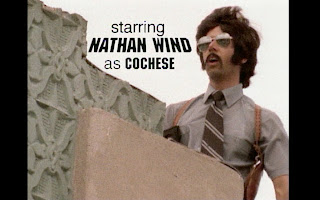 I apologize for the lateness (five whole days!) of this in general terms of the expedience of how information passes through the interwebs these days (and here I will offer a RIP to Maurice Sendak another important component of my youth, and whose books I will surely read to my son Elliot, who in fact already possesses four), but the passing of Adam Yauch (aka MCA) last week has left a, surprising even to myself, immeasurable cloud of sadness over me.

Upon reflection, I understand that a part of my childhood has passed. License to Ill was one of the first cassettes I ever purchased with my own money, the other, purchased at Gemco at the same time was Peter Gabriel So, a symbol of how much my ten year old self watched MTV (and subsquently, how much MTV has fallen down the shitter). But it’s deeper than that. Because the Beastie Boys weren’t just a component of my youth, they have been around for the last 25 plus years of my life. Their initial incarnation might have been kind of a joke, though a joke that with a few wincing moments aside still holds up, but they constantly evolved and matured, while still having a good time and never taking themselves too seriously, and it’s hard not to see my growth as a person reflected in their work. Yauch made perhaps the greatest evolution from the most lewd member of their first incarnation to a Buddhist who would literally not hurt a fly due to his religious beliefs. They were there for me in high school, college, and even last year as a married middle aged guy, with their final release Hot Sauce Committee part 2, a throwback album that showed neither their skills or joie de vivre had diminished.  While they always respected their past (and would still perform songs from License to Ill in concert with a few notable lyrical alterations), they never became a legacy act; you would never see anyone at a Beastie’s show looking at their watch waiting for “Sabotage” as they patiently went through their new material.  I do not know anyone who didn’t like or at the very least respected the Beastie Boys, and quite frankly, I’d prefer not to.

They were also complete film nerds, dropping references to Taking of Pelham One Two Three, High Plains Drifter, Dirty Larry, Crazy Mary and Dolemite in their rhymes, sampling the scores of Psycho, Superfly and Jaws and paying tribute to Mario Bava’s pop art comic masterpiece Danger: Diabolik in their “Body Movin’” music video, which was directed by Yauch, or technically his lederhosen sporting alter ego Nathaniel Hornblower. Hell, they’re the only band to have a video compilation released as part of the Criterion Collection! Yauch’s passion for cinema lead him to create the distribution company Oscilloscope Laboratories with David Fenkel a few years ago. In an age where “independent cinema” has become deluded with so many toothless biopics, “quirked out” comedies and bad horror films, Oscilloscope has one of the better track records of getting interesting and challenging fair to an audience, including two of my favorite 2011 releases, We Need to Talk About Kevin and Meek’s Cutoff; in full admittance, they released probably my least favorite film of 2011, Bellflower, but even I will admit that is a distinctive personal work.

This week I, as I am sure many of you, find myself listening again to the Beastie’s discography for comfort, and as I listen to Yauch’s scratchy voice bragging that he has more suits than Jacoby and Meyers or informing listeners that he does not, in fact, rock the mic with the pantyhose, it is hard to come to grips with the fact they are a thing of the past, but as you listen to their records, it is impossible to grieve, because the Beastie Boys music is and always shall be, the soundtrack to the very celebration of life itself.

I was also really saddened and in disbelief when I heard about his passing. Beastie Boys had a massive influence on me and millions of others. I was excited when the newest album was released, hoping things were going better for him. I will always cherish the boys albums.

Hi, I came across your site and wasn’t able to get an email address to contact you about a broken link on your site. Please email me back and I would be happy to point them out to you.

BTW my friend, I've nominated you and your blogging for a Liebster Award. If you're up for it, great! Otherwise, no worries. Thanks