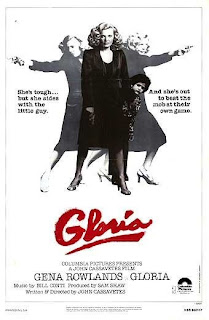 I will lose some cred with this admission, but other than his debut film Shadows which I saw during my first semester of college and The Killing of a Chinese Bookie which I saw about 12 years ago, and for which I have the slimmest of recollection, I haven't really explored the works of independent maverick writer-director John Cassavetes. I am more knowledgeable of his acting gigs which he mainly did to provide money to fund his self produced low budget works. Still, as the saying goes, his reputation precedes him, so it must have been some kind of bad harbinger of the corporation takeover that laid ahead in the upcoming decade for American Cinema that his first film of the 80's (his last decade alive, he passed away in 1989) would be a buddy picture involving, of all things, an aging street smart woman (his wife and frequent star Gena Rowlands) and a sassy Puerto Rican kid who attempt to hide from the mob. Had the auteur given up his intimate relationship dramas for high concept? Certainly the opening shots, views of famous New York landmarks (Statue of Liberty, World Trade Center & Yankee Stadium)shot from a helicopter signaled a change from his past films, some of which were shot in Black & White 16mm.

Cassavetes may have been changing some of his methods, but not necessarily his themes. Gloria is essentially a relationship film and those shots of New York are relevant, the city itself is a character. The plot is simple. Buck Henry plays a mob accountant improbably married to a gorgeous Puerto Rican lady, he has stolen money from the mob and has a book full of accounting records, he and his family will be gunned down, but not before he can hide his son, Phil, in the care of their neighbor, Gloria. Gloria and Phil must then hide from the mob and eventually try to get out of the city.

The main flaw of Gloria is that Cassavetes doesn't seem all that interested in the mob genre and its the weakest element. As much as he loved Rowlands, and as good as an actor that she is, its unbelievable that she escapes these alleged tough guys with the ease she does here (even when her past relationship with the head of the mob is revealed). I think his hand is shown, that he is more interested in commenting on classic genre conventions than actually making the bad guys formidable in any sense, by making all the mobsters old white guys and having the heroes be female, young and Hispanic.

Early in the film, 7 year old (age approximated) Phil, is told before his father is killed that he's now "the man", repeating this as a mantra of sorts, he tries to impart authority over Gloria, who of course, is having none of it, even kicking the young kid out of a bed they share in a sleazebag motel after he tries to get fresh with the woman roughly thirty-five years his senior. After saving his hide several times and coping with the death of his family, Phil tells her (I paraphrase) "You're my father. You're my mother. You're my friend." and when they reunite in the end, she's disguised in a gray wig and calls out to him "Don't you recognize your grandma?", both realizing and accepting that in their empty existence, they are everything to one another.

One aspect I got a kick out of is that Gloria doesn't have a car, and Phil is obviously too young to drive, so they are trying to outrun the mob but they have to rely on public transportation. A dilemma that is definitely New Yorkian by nature. Cassavetes shot on location and fills the film with crowded trashed streets, beat up cabs and packed subways that play a role as intrinsic to the feel of the film as the two main characters. They get separated when trying to leave a rush hour level crowded subway and later Gloria is able to elude a potential threat when the cab driver throws the dude out of the cab for being a racist jerk.

Cassavetes may not be the first person you'd envision writing and directing what essentially is a chase buddy movie, and the endeavor is weakened by his unwillingness to ever make the villains that much of a threat, but his ability to develop a complex relationship between the two protagonists and an interesting take on the whole dynamics of "the chase" gives Gloria a nice spark. It may not be considered high tier Cassavetes, but its interesting nonetheless.
Posted by Colonel Mortimer at 6:54 PM

hi everyone. I'm actually into shoes and I have been looking for that meticulous model. The prices due to the fact that the shoes are around 210 dollars on every page. But for all I found this area selling them for half price. I absolutely like those [url=http://www.shoesempire.com]prada sneakers[/url]. I will absolutely buy them. what can you tell me about these?

good day everyone. I'm actually into shoes and I have been digging as far as something that exact model. The prices for the velcros were about 330 pounds on every page. But finally I found this area selling them for half price. I absolutely like these [url=http://www.shoesempire.com]gucci sneakers[/url]. I will absolutely order these. what is your opinion?

hello ppl. I'm actually into shoes and I was searching for the sake of that singular brand. The prices seeking the sneakers are about 250 pounds on every page. But for all I set this locate selling them someone is concerned half price. I exceptionally want those [url=http://www.shoesempire.com]gucci sneakers[/url]. I will definetly order them. what do you think?

good evening fellas. I'm honestly into shoes and I had been looking for the sake of that exact make. The prices for the velcros are about 200 dollars on every page. But finally I set this area selling them as a remedy for half price. I exceptionally want these [url=http://www.shoesempire.com]gucci sneakers[/url]. I will absolutely buy these. what is your opinion?