Death Goes to the Movies, Sees an Arty Foreign Film at a Rep Theatre

The belated eulogies continue as we grieve three giants of film:

Whether or not you know anything about world cinema, the first two names are instantly familiar to you, and if you are a film buff, then in the last few weeks you probably have read approximately 457 articles or blog entries about their death. I don't feel I have a fresh or interesting new perspective to add to the conversation, I enjoy films by both men, but have seen far too little (three of Antonioni and about eight of Bergman) to consider myself well versed in their oeuvre. For informed opinions, I recommend reading this interview with Bergman fanatic and disciple Woody Allen at Time. And for Antonioni, Martin Scorsese should do.

What I did find interesting was the reaction that their day-apart passings stirred in cineastes. At the Criterion Collection forum, the overwhelming conclusion was that the two auteurs' passing signaled nothing short of the final death blow for the foreign art film. A strange assertion seeing how in the past 25 years, Bergman directed all of one theatrically released film (he was however still very active in theatre in his home country of Sweden) and Antonioni co-directed one feature, in 1995. Agreeing with the assertion that the art film is officially dead was none other than noted feminist author Camilla Paglia, but while she loved her some early Bergman and Antonioni, she doesn't consider the death of art films as such a bad thing(link).Meanwhile, as they are apt to, the contrarians came out to declare Bergman as "not all that", most famously Chicago Reader critic Jonathan Rosenbaum, which inspired a reaction from Roger Ebert, basically amounting to: "is so!"

I do see the worrywart foreign film buff's point to some extent. How many modern day foreign filmmakers, or at least those who work solely or primarily in their native country, are the household name that either Bergman or Antonioni were, even by people who never saw one of their films? Pedro Almodovar, perhaps. Maybe Wong-Kar Wai. All the other big name modern foreign auteurs I considered have worked pretty evenly between their country and American features (John Woo, Ang Lee, Alfonso Cauron, et cetera). Let's be frank, there was never a time when Ma and Pa Kettle in the Heartland ever thought "You know what I'd like to watch tonight? A film dealing with ennui amongst the European elite, that's what!" "What? While there's that dreamy meditation on god existsence?" However, there was a time when its was considered a necessity to catch the latest arty foreign fare if you lived in a major metropolitan city or college town (see Woody Allen's 70's input for examples). Many of Bergman's films were theatrically distributed in America via major studios such as Warner Bros, as were three of Antonioni's most notorious (albeit English language) input from the 60s & 70s, including his only American made film, Zabriskie Point , which famously concludes (I must admit I haven't see the film, hopefully his death will prompt a DVD release) with "FUCK AMERICA" written in the sky.

I remember when I was kid seeing the poster for Bergman's Fanny and Alexander in the lobby of the theatre where I saw A Christmas Story (and what a great double bill those films would make, two radically different takes on childhood holiday nostalgia). I grew up in San Jose, not exactly a small town, but in 1982, pre-internet boom, not a major metropolitan city by any stretch. Today, foreign films, unless they have a sellable hook or are genre fare, tend to be stuck mainly to the festival circuit and a one or two week theatrical engagement, even in Los Angeles and New York. Whether that is due to changing exhibition methods or DVD or a shift in general taste in America towards escapist fare is up to a lengthier debate then I am prepared for on this humble blog, but what I will state is that even if Ingmar and Michelangelo lived and made films into their 200s this would not alter the fate of the foreign art film, which will always have its devoted following, but probably never regain their prominence in America.

A death that saddens me more than the two directors (who at a combined age of 187 weren't exactly spring chickens) was Sherman Torgan, a name that unless you live in Los Angeles is no doubt unfamiliar to you (sadly its probably the case even for many that do reside in LA). He was only 62 years old when he suffered a heart attack and died in late June. He was the owner/manager/propertier of the New Beverly Cinema, one of the last remaining repertory theatres in Southern California, and my personal favorite.

The New Beverly, a former pornographic theatre, was refurbished in the 70s by Torgan and turned into a rep theatre with revolving double bills of classic, cult, foreign and forgotten films, usually changing features every two or three days. When I moved to Los Angeles a few years ago, it was the place that made me fall in love with the potential of the city. I've had two first dates there as well as the second date with my fiance. In the five years living here I've seen theatrically for the first time at the New Beverly: Notorious, MASH, McCabe and Mrs. Miller, Sunset Boulevard, The Magnificent Ambersons, Duck You Sucker, Bottle Rocket, and a week before Sherman's passing, Barry Lydon to name just a few. It struck me while watching Barry Lyndon why I loved the theatre. Here I am experiencing a thirty year old methodically paced three hour epic considered at the time of its release a major disappointment with about a hundred others who were caught in just as much rapt attention and awe as myself.

While I never had any conversations with him personally, I will always remember Sherman as the guy who was eternally running low on small bills and would give a little staredown to those that paid using a twenty dollar bill for his cheap (especially in Los Angeles) seven dollar admission. I always tried to make a point of giving him exact change as a small form of gratitude for his work. Sherman made keeping the admission affordable a top priority, and I'd often notice people in the theatre that look downtrodden or even homeless, I assumed Sherman would let them in free of charge, giving them entertainment and temporary respite from outside.

The theatre felt like a secret to many of LA's film enthusiast, if you look closely you can see the famous New Beverly calendar make appearences in Swingers and Border Radio, but in March it gained some exposure as Quentin Tarantino threw a two month long Grindhouse Festival at the theatre to promote Grindhouse. The Los Angeles Times who usually gives the theatre little more than perfunctory notices in its revival theatre listings dedicated a weekend Calendar front page to the festival. When I caught a few of the films in the series I was greeted with a sight I had never experienced, lines around the block. This was one secret I had no problems sharing however, and I was glad that its once questioned future seemed bright for a change.

After much soul searching, Sherman's son Michael has decided to keep the theatre operating, and to that I say "thank you". I know the loss of a father trumps a film geek's loss of his or her favorite theatre, but the New Beverly was Sherman's gift to us and his life's work, and I am glad that it will be around to entertain and educate its patrons for the foreseeable future (though if you want to put in new seats, I will totally be okay with that!)

Think globally, act locally is a famous if simplistic slogan, but Torgan's theatre represents that very ideal. For it and its ilk are the places that will ensure that films by the likes of Bergman and Antonioni will not only still be seen, but seen in a theatre with a receptive audience, where they should be. 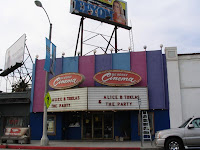 Posted by Colonel Mortimer at 8:44 PM