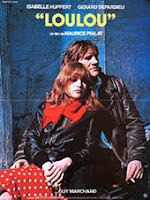 Part of the 80's Project (returning after a three month hiatus)

A lazy critical fallback is praising a movie by referring to it as being "realistic", but isn't "reality" the very antithesis of what films accomplish best? Don't misinterpret me as the type of viewer that seeks solely from films only escapist fare (another lazy fallback, this by average filmgoers). But if you think of your favorite scenes in film history, be it Psycho's shower scene, Citizen Kane's montage of a disintegrating marriage or Chief Brody on a crowded beach getting closer and closer as each beachcomber passes by in Jaws, the directors employed editing, music, framing and among other various methods to create a cinematic language that as art far transcends realism. In William Goldman's book Which Lie Did I Tell he addressed one of film's most tried and true cliches, the protagonist (in his book he used Lethal Weapon as his example) always finding a parking space in front of whatever place they stop at by writing a scene where the cops spend a good five minutes driving around looking for an open space. In a Film Theory class back in college, our professor showed us two scenes from two films that depicted a minute of time and asked us which related most to our sense of the passing of time. The first scene was from Ingmar Bergman's Hour of the Wolf, where Max Von Syndow looks at his watch for exactly one minute, the scene is one static shot, taking place in real time. The next was from Alfred Hitchcock's Sabotage. In the scene, a woman unknowingly has stowed a bomb on a bus, set to go off in one minute. In the scene Hitchcock cuts between the unsuspected passengers, the bomb ticking, the bus wheels, the city outside, etc. This montage takes about thirty seconds. The overwhelming response was that Hitchcock's depiction of a minute represented people's relationship with the passage of time that everybody agreed that people tend to lose track of time and never register an exact minute in time.

Maurie Pialat's Loulou is a film that attempts to represent "reality" in direction, stylistic choices, acting and screenplay. The first thing that stands out is its complete lack of a score, in fact the only time we ever hear any music is when a character is listening to a radio either in a car or at home, and once we exit car the sound ebbs out like it would in real life. Pialat also stages most of his actions in the most objective angle possible, framed mid-screen.

The screenplay is sans any major plot points, it revolves around a woman, Nelly (Isabelle Huppert) who leaves her husband and bourgeois lifestyle for an affair with poor ex convict Loulou (Gerard Depardieu). Plot-wise, that's pretty much it. There is never any specific reason given, its implied she herself isn't entirely aware, other than Loulou represents a dramatic shift from her stale and demanding husband Andre (Guy Marchand), perhaps it's his magnetism, his sexuality or just his je nais Deparideuness. That's not to say its a boring film or nothing happens, just the drama is all derived from the characters actions or inaction. The best scene occurs when Andre starts a scuffle with Loulou, he weakly pushes him and they end up in an alley swinging and badly missing one another and getting exhausted before incurring any physical damage. They keel over and just sort of stare at each other no longer interested in fighting, Nelly consoles both of them before they settle on a truce and go to a bar to share a drink. Pialat is able to pull this off so that it combines awkwardness, humor and honesty. It's a tone that the film straddles throughout, like in another scene where Loulou's ex girlfriend visits him while he's in bed with Nelly, Loulou invites her to join them, and as she starts to undress, Nelly gets up and leaves, the ex follows her out, leaving Loulou who had been having visions of threesomes dancing in his head, alone.

In addition to this "realness", Pialat minds some interesting thematic ideas about class distinctions. Nelly seems to be at war with her instincts and desires, she rejects her bourgeoisie lifestyle, but not the tendencies that come with it. She still is an avid reader, but when her husband asks if she discusses literature with her new amour, she blithely retorts, "I read books, what do I need to talk about them for", as a rejection to one of the sole benefits of their relationship one assume. Still, in the brief period when she returns to her husband mid-affair she does seem more at home in the comfy bed in Andre's nice loft then she ever appears in Loulou's cheap flat, lying on a mattress in the middle of the floor. Since no explicit reason is ever given for her affair, one senses she has reconsidered her impulses at comfort in place of passion.

No one will ever mistake Loulou with being representative of any sort of "reality", no matter what cinematic pretension Pialat may present us with, still like life it features internal struggles, questionable decision and most importantly, messiness. Due to the stylistic choices it's a film that's not entirely engaging upon watching, but improves substantially upon reflection.
Posted by Colonel Mortimer at 7:56 PM