Let's Hear It For the Best Month of the Year! 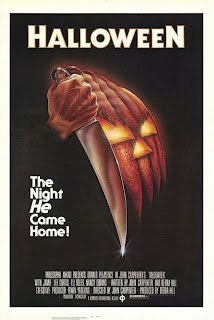 October or as its sometimes referred: Rocktober (by your local hard rock, less talk radio station), Shocktober (by cable channels with horror movie-thons) or Frocktober (amongst the Monk community)is by far my favorite month of any given year for one simple reason, two of my favorite hobbies, watching horror movies and drinking beer are not only considered socially acceptable but are actually encouraged. This October particularly holds a special place for me as I am getting married on October the 13th (no, not a Friday)! The only down side is I will miss some cool blogging and horror movie related events (as well as Oktoberfest!). I have one more 80's Project entry I hope to get done before I leave town (and it's a horror movie) and I am hoping that when I return to town (on the 29th) I can revisit Halloween III finally.

In the meantime, let me make some suggestions on things to do while you are going through Colonel Mortimer withdrawls: 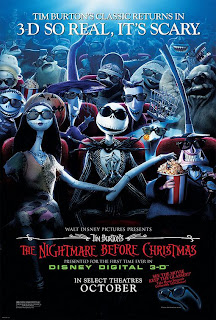 Sadly, October is no longer a fertile time for new horror movie releases, unless you count the new Tyler Perry joint. Why is that? Wouldn't Rob Zombie's Halloween remake be greeted with a bit more enthusiasm had it been released this month instead of August, sure it would have still sucked or to use the nomenclature of Mr. Zombie "skullfucked", but at least people would have been in a horror movie state of mind. This year's horror slate is limited to all of three releases, and one is a 14 year old children's movie. Seriously film studios and independents, get your shit together, I want a minimum of eight horror films released October 2008. Let's look at the slate:

30 Days of Night (October 19th)
Vampires attack a small Alaskan town where it's dark all month long in this horror thriller based on a graphic novel (as is everything these days), any film with Josh Hartnett as its main star is already missing something in the charismatic lead role department, but the premise is interesting enough. David Slade directs, his last film was Hard Candy where he had some nice tension created until the film unraveled in the final act. Hope this script is decent. According to IMDB, Slade has also directed some Aphex Twin videos, and that dude's video are creepier than 90% of modern horror.

The Nightmare Before Christmas 3-D (October 19th)
What's this, what's this, Disney is remarketing an old film? Simply shocking! Disney's (by way of Henry Selick, Danny Elfman and Tim Burton) first spooky animated film since the Adventures of Ichabod Crane short has become quite the merchandising bonanza since it's initial release in 1993 thanks to Hot Topic and it's dual Halloween and Christmas setting.

Saw IV (October 26th)
While I cannot endorse this horror series, I checked out after the lame first film, after watching Zombie's idiotic retelling of Michael Meyers origin, I do have to concede some props for creating a new horror character and series instead of remaking a classic. 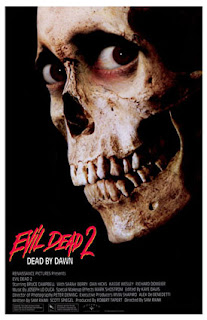 A brand new 35mm print of Sam Raimi's gory and hilarious sequel that I would gladly give up a hand to catch (as long as I can replace it with a chainsaw!)

While I am of the opinion that the Child's Play series results from morphing into comedy terrain is not quite as clever as the makers think it is, I grant them that Seed has some choice meta moments, and this screening should be fun with both writer-series creator-director Don Mancini and Jennifer Tilly in attendance, but where art thou, Brad Dourif?

This Santa Monica theatre is the only rep theatre in Los Angeles going full on horror as it dedicates the last few days of October to horror movie programming:

October 25th at 7:30pm
The Haunting & The Uninvited
Robert Wise's (who passed away earlier this year) classic The Haunting is still the movie that all haunted house films are judged by, just ask Jan de Bont. It plays with another haunted house story, the lesser known and unavailable on DVD, The Uninvited, directed by Lewis Allen and starring Ray Milland.

October 26th at 7:30pm
Demon Seed & The Invasion of the Body Snatchers (78)
A supercomputer wants to impregnate Julie Christie (can you blame it!) in this thriller from Performance co-director Donald Cammell, it plays with Phillip Kaufman's remake of Invasion of the Body Snatchers which is not only miles better than this year's The Invasion, but stands with John Carpenter's The Thing as exhibit A in the remakes don't have to suck debate.

October 31st at 7:30pm
The Omen
The original, Richard Donner directed non September 11th and Hurricane Katrina referencing version. "It's all for you, Damien!"

October 27th at 7:30pm
By far the most interesting option for your Halloween needs, the Aero is hosting an all night horror movie-thon, for a mere $20 you can watch 7 films all night with snacks and foods included, that is if you can survive, muwahahah!

The line-up:
Return of the Living Dead
Acid rain and punk rock zombies!

Freaks
Tod Browning's classic follow-up to Dracula. One of us! Gabba Gabba! One of us!

From Beyond
Stuart Gordon's follow-up to Re-Animator adapts a HP Lovecraft story that according to the Aero's calendar (sorry haven't seen it yet, need to queue this up) involves "sixth sense, mutating humans and monster unleashed from the netherworld."

The Beyond
Directed by Lucio Fulci, about a Louisiana hotel that contains a gateway to hell...aka The Superdome! (rim shot)

Last House on the Left
Wes Craven's debut is one of the most disturbing films I've ever seen, it's a revenge story inspired by Ingmar Bergman's The Virgin Spring. Just keep telling yourself...it's only a movie...only a movie.

The Children
Basically City of God, only instead of gang members, this time the children are zombies!

The Gates of Hell
The night ends with another from Italian gore maestro, Lucio Fulci, and again its about a gateway to hell. Hey, Wes Anderson has his recurring themes, Fulci has his gates to hell ruminations.

Since I won't be in Los Angeles for much of the month, I am not going to do the New Beverly calendar like I did for September. But here are a handful of double bills worthy of your attention.

Rushmore 7:30pm (plus 3:50 Sunday)
Bottle Rocket 9:20pm (plus 5:40 Sunday)
Speaking of Wes Anderson, his fifth film, The Darjeeling Limited opens this weekend, what better time then now to catch up with his first two and arguably best films.

This is a double bill I am really sad to miss, two of Michelangelo Antonioni's lesser seen efforts play together, Il Grido was the film he made before his first international success, L'Avventura. And Zabriskie, his only American financed film, has been out of print for decades. Its considered a disaster by some and masterpiece by others, I would like to see it for myself and decide, but alas, maybe another time.

This month's grindhouse double bill is two from cult writer-director Larry Cohen. In God various New Yorkers go on a murdering rampage because, well god told them to. Kind of like how he "told" Bush to invade Iraq. Bone stars Yaphet Kotto as a thief who breaks into a wealthy Beverly Hills mansion and discovers the dark secret of the couple who resides there, I actually prefer it's other title: Beverly Hills Nightmare! 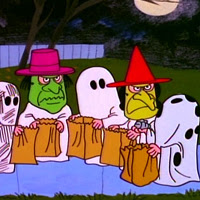 Halloween Marathon--Wednesday, October 31st at 10:00am, AMC
If you like your horror movies edited for television, tune into the channel formerly known as American Movie Classic for an all day festival of the first six films of the Halloween franchise, beginning with John Carpenter's classic and all the way to Donald Pleasance's last appearance, in the Curse of Michael Meyers.

Classic Horror Movie Directors Series, Fridays at 8:00pm, Turner Classic Movies
The cable station that still actually plays classic movies has the most interesting programming, dedicating all Friday nights in October to a series of film by a classic horror director: 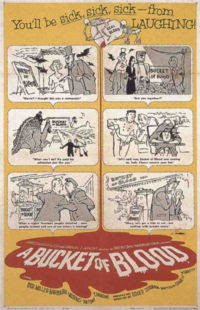 Friday, October 5th--Jacques Tourneur Night: Curse of the Demon, Cat People, I Walked With a Zombie, The Leopard Man

The French director who made several artistically solid films for producer Val Lewton also directed the Robert Mitchium noir classic, Out of the Past.

Castle was a showman above all, Joe Dante's Matinee starring John Goodman was loosely based on his life and the gimmicks he used to sell his films. Make sure to electrically shock whomever you watch these films with at the appropriate time.

TMC proves the director of Bela Lugosi's version of Dracula was no one trick pony with these four films that display his range, directorial fortitude and experimental techniques.

Friday, October 26th--Roger Corman Night: A Bucket of Blood, Creature From the Haunted Sea, The Pit and the Pendulum, The Terror

Before introducing the world to such diverse talents as Francis Ford Coppola, Peter Bogdanovich, Martin Scorsese and Jonathan Demme, Corman directed many of his own low budget horror films. My only complaint, no X: The Man With X-Ray Eyes!

Sadly, I will not be able to participate in any of the interesting blog-a-thons that will pop up this month, but that doesn't mean I won't be reading them. And so should you: 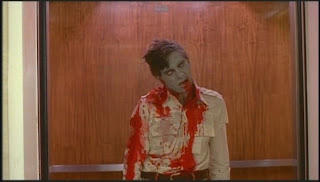 31 Days of Zombie at The Projection Booth

Who doesn't love zombies? No one, that's who, and what better way to prepare for the inevitable uprising of the undead by checking out the Projection Booth's month long discussion of a different zombie movie a day? From the new to the classic to the obscure this blog is sure to rattle your "brainnnnsssss". So far essays include reviews of Zach Snyder's remake of Dawn of the Dead and 28 Days Later.

31 Movies That Give You Willies at Shoot the Projectionist

Shoot the Projectionist is also devoting the month of October to a discussion of horror movies, the most intriguing is his survey of several bloggers to create a list of 31 Horror Movies That Give You the Willies.

Much like the Ministry song, for Stacie Ponder, everyday is Halloween. She is a devout lover of all facets of horror, especially the cheesy. She participated in the Shoot the Projectionist survey and all month long she is writing extensively on some of her picks and runner-ups.

Likewise, at the Horror Movie A Day Blog, it's always time for horror movie discussions. This October though, instead of just reviewing one horror movie a day, he will be discussing two horror movies a day, one he's never seen and one that is a classic.

Well I think I leave you with many an option for the month ahead. Hope you have fun with your "tricks or treats" and remember folks, caro syrup and red dye = best fake blood. 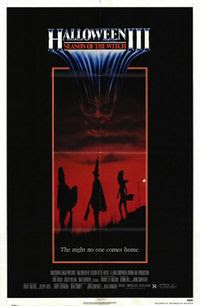 Posted by Colonel Mortimer at 3:50 PM

You left off that niners game, that was some scary shit!