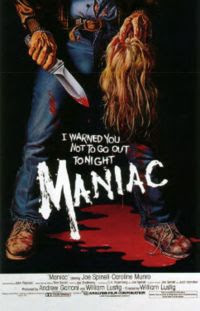 The first shot immediately reveals its intention to put the audience in an intimate relation with Spinell’s character, Frank Zito. The very first image is a shot of one of those beach pier telescopes you put a quarter into, the next shot is a subjective POV through the telescope’s lens at a couple frolicking about who will be the film’s first victims. A slasher film opening with the subjective POV of its killer is nothing unique, even as early as 1980, having been done beforehand most famously in Halloween (lil’ Michael Myers attack on his sister) as well as another 1980 film featuring the work of Tom Savini, Friday the 13th. However, we never get to follow Myers or Mrs. Voorhees having a post-murder schizophrenic conversation with their dead mother as we do in Maniac. In these scenes Spinell gives a fearless, personal and an intimate, some, hell most, would say uncomfortably intimate, performance. We always call actors like Charlize Theron “brave” for gaining weight, wearing bad make-up and not washing their hair for a couple of weeks in Monster, but Spinell’s turn as Zito earns that distinction because this is his actual body and he allows Lustig to film it in unflattering close-ups, in all his flabby stomach, sweaty balding head and acne scarred faced glory.

The first half hour or so of Maniac is structured thusly: Zito picks a target, follows that target around until they are in an isolated location and then kills them in a graphic manner (thanks to Savini). What’s interesting is Zito’s improvisational process of killing people. In the Friday the 13th sequels, Jason mixes things up from time to time, but he’s a machete man at heart, Myers usually sticks to the tried and true kitchen knife, but Zito is the type of guy who sees what he has around the house and says to himself “hey, that’ll do”, as a result we get strangulations, shotguns to the face, even a sword as murder methods.

An interesting aspect of this structure is that while he's stalking his victims we stay with Zito’s perspective, but once we get to the chase our perspective shifts, and we find ourselves in the victim’s shoes, not knowing when or how Zito will strike. I’m not sure exactly whom we are to sympathize with. We have spent more time with the killer and know him more intimately, but then again, he is a maniacal killer, I mean it’s in the title! But due to the nature of his random victim selection there’s less character definition with them than we’d have if we were introduced to them earlier, like the typical camp counselor in a Friday film, and yes, that is the first and only time a Friday the 13th movie will get credited with any form of character development.

After awhile it must have occurred to Lustig, Spinell and co-writer C.A. Rosenberg (who has no other film credit, is it a pseudonym for Lustig or Savini?) that 90 minutes of Zito going around killing someone and going home and having conversations with his dead abusive mother would seem repetitive and go nowhere. So we are then introduced to a fashion photographer who will become Zito’s “love interest”. This part drags the film down, not because there’s no murder, but due to the fact that a.) it’s more than a little unbelievable that this trendy, beautiful, popular woman would have any romantic interest in Spinell, even when he’s playing “normal” he still looks like Spinell and has more ticks than Norman Bates, and b.) the filmmakers seems indifferent to these scenes. Spinell saves most of his acting energy for the schizo scenes, Lustig shoots them boringly, saving his savvier cinematic tricks for the suspense and kill scenes, and Savini is not around. Eventually Zito decides that he’d rather be a serial killer than an arty New York hipster and while it’s a commendable choice, his attachment to her and the fact that he attempted any sort of an emotional relationship with a woman who is not his dead mother ultimately costs him.

Despite borrowing liberally from not only Halloween, but also aspects of other horror classics such as Psycho (killer channeling and conversing with his dead mother), Carrie (let’s just say hands pop out a grave at one point) and Dawn of the Dead (in a dream sequence, Zito gets torn to pieces by his zombified victims, where Savini pays tribute to one of the great horror make-up artist, one Tom Savini), the sum is greater than its parts. If you’re a fan of the genre, and have a strong stomach, Maniac is definitely worthy. 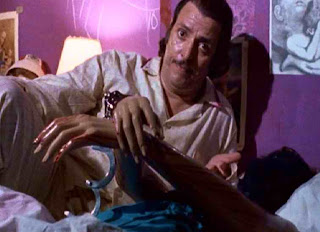 Maniac receives runner-up honor on my list of idiotic work by police officers in a horror movie climax. The winner is of course Black Christmas (don’t make me have to specify the original) where after Olivia Hussey survives the traumatic experience of being stalked and nearly killed by her boyfriend (or was it?) everybody leaves her asleep alone in her sorority house bed. With, it turns out…the real killer…duh duh dun! Well in Maniac, after Frank unsuccessfully tries to kill his fashion photographer girlfriend he returns to his apartment, has the aforementioned dream that he’s torn apart and apparently dies from self inflicted stabbing wounds. It turns out his lady friend didn’t cotton to being nearly murdered and ratted him out, so two Serpico wannabes bust into Zito’s apartment only to find him dead (or is he?). So what do they do? Shrug and leave. Of course after they leave, it’s revealed that duh duh dun…he’s still alive! Seriously guys, I know its pre-cell phone, but you have a CB radio in your car, right? The correct procedure, I am guessing, is not going “well, shit happens”, but rather having one of the cops stay in the apartment as the other goes to contact a coroner or one of them CSI guys. Hell, if you don’t have a CB radio, find a goddamn payphone, man. Its 1980, they still exist, plus you just found the killer that has been plaguing New York for a few months, I’m sure your boss would accept a collect call.

I guess what the Strokes said about New York City cops in that one song was pretty spot on.

While this was definitely Joe Spinell’s biggest role of 1980, probably biggest role ever, it was one of 8 films and 1 TV movies featuring a Spinell performance in the year.
Posted by Colonel Mortimer at 10:07 PM