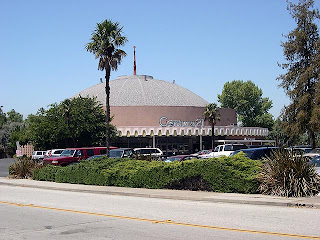 If you attended a movie at a Syufy theatre (better known as the Century Theatres) sometime in the 1980’s or 90’s you no doubt remember the floodlight policy trailer that preceded every film. Movie-theatre-going-wise, I was lucky enough to grow up in San Jose, CA and pretty much the entire film going of my formative years were at their landmark “dome” cinemas, Century 22, 23, 24 and the crown jewel of them all, Century 21, the great single screen theatre that was also the first of the Syufy chain to carry the name “Century”, christened as such because its futuristic design (circa 1964) was heralded as be the type of theatres that one would presumably expect to be the norm in the 21st century (unfortunately that was not to be the case).

Sometime in the early 90’s the Syufy corporation officially changed it’s name to “Century Theatres” since pretty much every post-Century 21 was subsequently labeled as a “Century”. With the name change, the popular floodlight policy trailer was scraped and replaced with something more non-descript.

What makes the floodlight trailer stand out is the interaction it inspired amongst loyal crowds. On YouTube it is labeled: The Syufy Clapping Trailer. And yes, clapping is what I associate most of all with it. Psyched film fans witnessing the further adventures of Luke Skywalker, James Bond and Indiana Jones would form a cacophony of claps to its syncopated beat. There even floated around rumors and stories of people who would stand up to simulate the floodlight movements with their arms (though I never personally witnessed or participated in that particular activity). I remember attending a matinee of A League of Their Own with my mother and even a crowd of middle-aged soccer moms clapped along (to be completely honest, at the time I thought it was kind of lame that adults had so blatantly co-opted “the clap” that their children, if not invented, perfected, if the phrase “jump the shark” existed at the time, I’m sure I would have applied it to the events of that summer afternoon in 1992).

I realize that this posting originates from a place of nostalgia, but it’s not necessarily just for the carefree days of my youth or the kitschy retroness of the trailer’s design, but rather a time when film going represented something a little more special: a sense of community, something that has been lost a lot what with the ever-decreasing quality of Hollywood filmmaking, crowds who seem more interested in their Blackberrys than the film they paid to see, and the fact that movies open so wide that on any given day a film can play on as many as 10-15 screens per town. Sadly, the Syufy/Century theatre is partially responsible for this, opening multiplex after multiplex and cutting some of it’s domes in half to increase screening capabilities (the 23, 24 and 25 included) instead of focusing on larger one or two screen theatres, resulting in the abandonment of the quality of the theatres and their designs in the process.

Last year, Cinemark bought out the Century Theatre corporation with one sole exception, the three original domes and their drive-in screens which will revert back to operating under the Syufy name. And for discerning San Jose movie fans, there still is no better place to see the latest hit films. Now let’s hope they bring back the floodlight policy trailer!

Thanks for reading the long preamble, it’s now time for today’s featured entertainment. So sit back, relax, and enjoy the show!

Posted by Colonel Mortimer at 8:46 PM

wow what a trip down memory lane, i always wondered how the lights made the letters go away as a kid.