Death Pushes An Elderly Wheelchair Bound Woman Down the Stairs 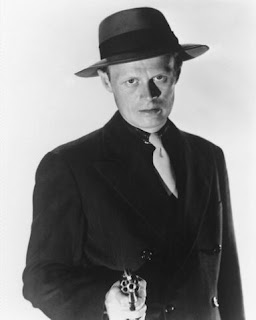 I'll be honest with you, I didn't realize Widmark hadn't already passed away years ago when I heard the news of his death yesterday. He had retired from acting in 1991 and I didn't really discover him myself until a few years after that when I began to delve into film noir and recognized his distinct talents at playing manicial and tortured men. I probably assumed at the time that he had, like the majority of that era's stars by the mid 1990's, long since left us.

His forceful screen presence was already evident in his debut film performance as the psychopathetic ex-con Tommy Udo in Kiss of Death which instantly made him a star. He had a long sustained and varied career, but, like Humphrey Bogart and John Garfield, Widmark will be best remembered most for his vivid potrayls in the post-war American suspense dramas that would later be labeled "film noir" such as the aforementioned Kiss of Death, Sam Fuller's Pickup on South Street and Elia Kazan's Panic in the Streets.

My personal favorite Widmark performance is as the ambitious con artist Harry Fabian that plans a big scheme for finacial freedom that fatally backfires on him in Jules Dassin's Night and the City. His bravura performance in the film's final scenes where a sleep deprived Widmark desperately runs through desolate streets for a shelter that does not exist are still etched in my mind despite the fact it's been nigh ten years since I saw it (note to self, pick up the Criterion DVD already). It actually reminded me a bit of the performance of Roy Schieder at the end of Sorcerer when he reached his physical and mental limit (as discussed in my Schieder write-up).

Night and the City marked the final film Dassin would make in America before escaping to France after being labeled a "communist" by HUAC, he would go on to achieve great recognition and would craft another crime masterpiece, Rififi.

EDITED TO ADD ON 4/1/08--After I wrote this, I learned that Jules Dassin passed away this weekend. Please consider this a tribute to him as well.

Here is the trailer for Night and the City which only hints at the tenor of Widmark's performance.

Posted by Colonel Mortimer at 1:45 PM

[p]For most of them, they only due to busy work, but after statistic show that people often do exercise live longer than those who lack of exercise, importance of health get attention . [url=http://www.uschristiannlouboutinsale.com]christian louboutin us[/url] ladyluxuryshoes . com/ [url=http://www.uschristiannlouboutinsale.com]christian louboutin sale us

[/url] sale show the power of authority . http://www . This is Christian Louboutin shoes who can make the universe dance began shoemaker, then take heart in the thought and put a big fashion item . Be sure to remove the spots on your shoes with a piece of [url=http://www.chrilouboutinshoessale.com]christian louboutin shoes sale[/url] soft damp cloth when you find them . [url=http://www.chrilouboutinshoessale.com]cheap christian louboutin shoes[/url] mbt-sells . The entire cream is going to make all the leather-based considerably gentler and also just not in pain extreme while wearing keep in mind this.[/p][p]The whole industry is often criticized for offering low wages but in these areas there may be no alternative job available . They come to [url=http://www.chrilouboutinshoessale.com]christian louboutin wedding shoes
[/url] you personally employing the best of everything . Whether the seam is neat? Whether there are thread breakage? Is the sticking firm? If the answers are all YES, you can move to the next step . 60-carat pav sapphire body and a 3 . Never put your wet shoes under the sunshine or dry it by your hair dryer, because these will result in the burst of the shoes . Here's the details of the shoes as follow: http://www . ladyluxuryshoes . [url=http://www.uschristiannlouboutinsale.com]discount christian louboutin sale[/url] co.[/p]