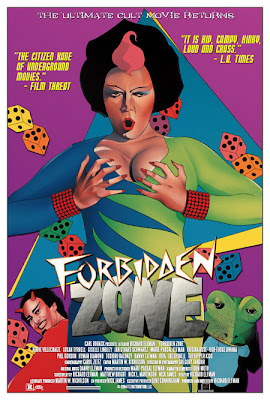 Richard Elfman's nonsensical cult classic (and nonsensical isn't meant disparagingly, though I did not like the film, but rather because it's the most apt description for the film's plot) is in many ways the forebearer to Aqua Teen Hunger Force and much of the Adult Swim lineup. Cheaply produced it, like Aqua Teen , equates randomness with hilarity and revels in the prodding of sacred cows, but unfortunately like it's followers to meaninglessly ends. For wit, in Forbidden Zone we get the following: an elderly man wearing diapers (ha!), a midget king (played by Herve Villechaize) married to a tall overweight woman (ah!), a woman who is constantly topless (saucy!) and a white character in black face (racy!). I guess if you are on the film's wavelength you'll enjoy yourself, but otherwise, as was the case for yours truly, the paltry 73 minutes running time will feel three times the length.

I'd love to provide you with a plot description but because Elfman and co-writer Matthew Bright (Freeway) made the brave decision of having no plot to speak of, the best I could come up with is: There's a weird zone under a house where a bunch of weird shit happens and there's characters in weird frog masks and uh, yeah, it's weird. I don't consider myself the type of person who's necessarily adverse to non-traditional plotted narratives, I love David Lynch, but the difference between Lynch and something like this is that Lynch's films invent their own narrative language and contain thematic explorations be they paranoia induced by parenthood (Eraserhead), self identity (Lost Highway) or the corrosive nature of Hollywood (Mulholland Drive), whereas Forbidden Zone relies solely on a throw the kitchen sink at 'em philosophy without serving a purpose. According to the film's Wikipedia page, it was conceived as "a musical that consisted of 12 musical numbers and a story loosely constructed around them" (loosely being the key word).

That's not to say the film is totally without merit. The art design nicely embraces theatricality over realism; consisting of paper mache and obviously painted sets interspersed with actual hand drawn animated segments Elfman and company create a visual style inspired by early cartoons and silent German expressionist works that proves that a small budget and a unique visual look are not mutually exclusive, I was reminded of what Lars von Trier did twenty plus years later with Dogville. The other highlight is the music, composed by director Elfman and his younger brother Danny's band The Mystical Knights of the Oingo Boingo (later shortened to the more marquee friendly Oingo Boingo, whose rabid fanbase I assume makes up the majority of the film's proponents), the score and songs consist of a combination of wildly varied genres from cartoon sound effects to Calypso to ska to classic rock to name just some. Apparently Paul Reubens, fan of all things bizarre and kitschy, liked the film so much that when it came to scoring his first Pee-Wee Herman vehicle, he requested Danny Elfman for the job, he would thusly create one of the all time great scores for Pee-Wee's Big Adventure which alone makes the film a worthwhile venture. I guess it's just too bad that it's strengths (the visual and musical style) wasn't put to use towards something a little more comprehensible or at least briefer, like, say a music video for Oingo Boingo.
Posted by Colonel Mortimer at 9:53 PM