Just What You Needed: More Things to Spend Your Money On

Let me preface this by saying that I am not receiving money or kickbacks from either of these retailers. With that said, there are currently two separate deals on some interesting DVDs that can be described for lack of better words as "hella good", resulting in a significant chink to my "reduce credit card debt" New Year's resolution.

The first one is at a site called Oldies.com, which is having a clearance sale on a wide variety of 20th Century Fox and MGM titles, many of them currently out of print, each priced at $6.98. Also, after reaching a certain spending point, you get free shipping. I picked up Alfred Hitchock's Lifeboat, Big Trouble in Little China, All That Jazz, Planet of the Vampires (an out of print Mario Bava sci-fi/horror hybrid and progenitor of Ridley Scott's Alien), The Bride Wore Black (another out of print title, this Francois Truffaut mystery/thriller was an inspiration for Kill Bill), two Stanley Kubrick's I didn't have: Killer's Kiss & Paths of Glory (unfortunately The Killing another MGM owned title is not included in this deal), Scorsese's The King of Comedy, The Knack...and How to Get it, Kiss Me Deadly, Laura, Cutter's Way, River's Edge, The Thin Blue Line and one of those Roger Corman Midnight Movie double bills: The Trip & Psych-Out to list just a few. 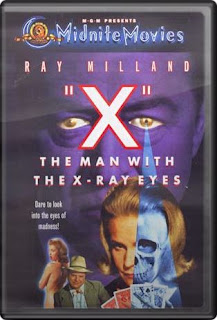 Other titles included in this sale that might interest you include a lot of the United Artists/Orion era Woody Allen films(pre-Soon Yi scandal), many James Bond films (though the earlier/non-remastered versions), a lot more of MGM's Midnight Movies series (both single and double bills), a few from recent Academy Award winning directors, the Coen Brothers (Barton Fink, Fargo), some great Brian DePalma thrillers (Dressed to Kill, Blow Out, Phantom of the Paradise), David Lynch's Blue Velvet, The Day the Earth Stood Still (still pondering if I should go ahead and get this or wait for the inevitable super deluxe special edition that will (most probably) be released in tandem with the Keanu Reeves starring remake opening), Fellini's Satryicon, many of the Soul Cinema Blaxplotation series (including Hell Up in Harlem, Blacula), both Hot Shots! movies, some Igmar Bergman (Hour of the Wolf, The Serpent's Egg, Passion of Anna, Shame..no Persona though), a lot from 20th Century Fox's Film Noir Series (including Kiss of Death, House on Telegraph Hill, Panic in the Streets), the Pink Panther series, some 80's era Schwarzenegger (Predator, Commando), and This Is Spinal Tap, amongst many, many others. And either my memory is worse than I thought or they keep adding titles weekly.

Meanwhile over at Deep Discount DVDs, where as their name suggests, they routinely offer DVDs at a deep discount, there's currently a select amount of Warner Brothers television series DVDs for as much as 78% off, including the entire run of Six Feet Under & Tales from the Crypt (sadly the three HBO series I would have gone buck wild for: The Sopranos, Deadwood and The Wire are not included in the deal), the complete classic George Reeves Superman series, the short lived DC comic adaptation, The Flash, some Dallas seasons, the complete V series, and the one I purchased, the entire run of The Adventures of Brisco County Jr which is selling for a ridiculous $24.95, discounted from the suggested retail price of $99.95. 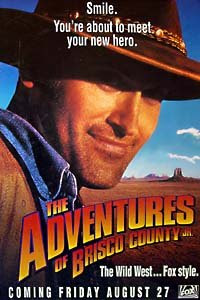 If you've didn't see Brisco County when it aired Fridays nights on FOX during the 1993-94 season, which I believe was the first time FOX aired programming on Fridays, it's a western/sci-fi/comedy hybrid starring cult favorite Bruce Campbell as the titular character, a bounty hunter in the old west whose search for the gang that murdered his father frequently finds him confronted by a mysterious orb which gives people great physical strength. 1993 was a rare year as it featured two major studio/network projects headlined by Bruce Campbell, the other, Army of Darkness, was released in April by Universal. For a brief moment it seemed there was a conscious effort made to give Campbell a chance as a leading man, of course neither Brisco or Army were financially successful and he soon was relegated back to the cult/horror ghetto. While I am glad he has his own specific niche, I think as an actor he's capable of much more and Brisco nicely displays his range. Brisco was an expensive show and while it had a following, FOX canceled it after one season, preferring to renew the show with a cult following that aired after it, The X-Files, despite both shows getting similar ratings. While that ultimately ended up being the wise decision, The X-Files became a cross-over hit and buzz show which aired for nine seasons, one does have to note that the fact that it was produced by Fox's parent company, 20th Century Fox, perhaps gave it a bit of an advantage.

Brisco County was created by screenwriter Jeffrey Boam (Indiana Jones and the Last Crusade, Lethal Weapon 2 & 3, The Dead Zone, The Lost Boys) who passed away in 2000, and his writing partner Carlton Cuse who would go on to have success as a writer and show-runner on another cult television series, although one with a sizably larger audience and a longer run, Lost.

Well, what are you doing here? You have some money to spend!
Posted by Colonel Mortimer at 8:01 AM