The Best Thing About the New Indiana Jones Movie...

...was the attached trailer for David Fincher's new film, The Curious Case of Benjamin Button, based on a F. Scott Fitzgerald story about a man aging backwards starring Brad Pitt as the eponymous Mr. Button with Cate Blanchett and Tilda Swinton.

In case you missed Indy, your theatre didn't have it attached to your print or you were distracted by the confused reaction it elicited in your audience, here it is...en espanol (for some reason an English version is unattainable) but since the imagery and mood evoked are the most indelible aspect of the trailer, nothing much is lost in translation.

Despite committing the trailer sin of using a piece of music best identified with another film, in this case "Aquarium" by Camille Saint-Saens, given the fact that that music is most associated with Terence Malick's Days of Heaven and Visions of Light, the documentary about cinematography, I'll excuse it as an homage and possibly a throw-down announcement that this film is going to bring it beautiful image-wise.

As for Indiana Jones, enough finger sweat has been spent on it already. It's pretty "eh" for me, definitely not as bad as some naysayers will have you believe but I am afraid any over-enthusiastic responses are probably due to a Pavlovian response to the familiar milieu. 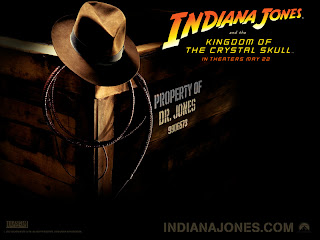 --The opening Paramount Pictures mountain logo dissolves literally into a "molehill", a clever joke on Spielberg's part admonishing to the template while accepting that perhaps the audience is putting too much stock in it's need for this sequel.

--Cate Blanchett imitation of Natasha from The Rocky and Bullwinkle Show worked for me surprisingly more than either her Kate Hepburn and Bob Dylan impersonations.

--Indiana Jones' reaction upon seeing Marion Ravenwood for the first time and his admittance that despite all the other girls, the problem was: "None of them were you". I wonder how Spielberg's wife feels about that meta-commentary on the annoyances and blandness of the other Jones' girls.

--Ford's fedora grab from Shia LeBeouf in the last scene.

--Harrison Ford is more vibrant and alive here than anything he's been in since, oh, Air Force One? The Fugitive? Unfortunately, that still equates to half-somnambulist.

--I was fearful of Mr. LeBeouf, but he's actually okay here, keeping his inherent smugness to a minimum. Also grateful that the not-so-stunning reveal of Mutt William's heritage occurred fairly early.

--The reveal of the Ark of the Convenient was cute, if a little pandering.

--Structurally, the film "felt" like an Indiana Jones film, which is more than I can say for the Star Wars prequels.

--It was great to see Karen Allen, but with the exception of some driving duties, Marion Ravenwood is given very little to do.

--A potentially great chase scene soon unravels when Spielberg and company go overboard on the CGI. Look I realize that CGI is unavoidable, but it shouldn't be so distracting. My favorite film of last year, Zodiac, is full of CGI, but it's weaved into the fabric of the cinematography stealthy enough that I was never once taken out of the film. I feel especially disappointed because Spielberg normally utilizes CGI effectively, as evidenced in Jurassic Park and AI. I don't want to bag on Lucas, since he didn't actually "direct" Crystal Skull, but it felt like the Star Wars prequels where so much visual stimuli occurs in the frame that the viewer is assaulted into exhaustion which soon evolves into boredom. Same goes doubly for the final set-piece which is pretty much consists solely of actors shot on green screens reacting to bad computer graphics.

--The "MacGuffin" that so excited George Lucas...what the fuck? Keep it simple, bro.

While I had a decent enough time, unfortunately nothing in the film got to me the way the two minute trailer that preceded it did. It was like an evening spent with old friends you haven't seen since high school. It was nice to see them again, learn what they've been up to, but there was a reason that you haven't seen them in years and despite some precursory niceties, you probably won't ever see them again.

And I definitely have no interest in seeing Mutt Williams and the Spooky Spectral Break-In at Watergate.
Posted by Colonel Mortimer at 7:54 PM

that monkey scene was not needed at all, it smelled of lucas so bad. i was also surprised shia was pretty decent. overall i think i could use a second viewing. i went to the midnight show and the audience wanted to love it, but i think most walked away just saying it was okay or good. somehow that doesn't feel like enough for this movie...once again.... fucking monkeys....