The Movies Go to the Movies: Ed Wood 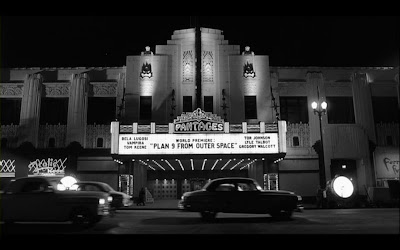 Seeing as I am as much a movie theatre geek as I am a movie geek, I thought I'd add a new feature (because if there's one thing my blog needs-it's another rarely updated feature!) consisting of shots of movie theatres in movies. Caveat: I plan on focusing on theatres I've been to or whose locations (current or old) I am aware of, which pretty much consists entirely of those in Northern or Southern California, the former where I grew up and the latter where I currently live, though if I catch an image of a movie theatre I know from my travels, I will include that as well. 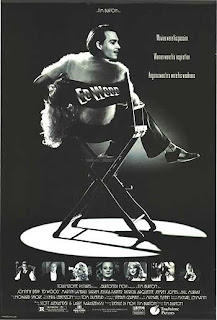 The inaugural entry is from one of my favorite films of the 1990s, Ed Wood, a film in which screenwriters Larry Alexander and Larry Karaszewski and director Tim Burton recontextualized their subject's life, the man considered the "worst director of all time", as a triumph, whilst not completely dismissing personal issues (alcoholism, exploitation of friends). The screenwriters accomplish this by structuring the film around Wood's friendship with Bela Lugosi and telling the story entirely from the director's perspective. In the DVD commentary the writers make mention of how Sarah Jessica Parker's character was seen by many a viewer as a villain, but in reality she was saintly to a fault and stayed with him long past the point most would.

Ed Wood also has a personal connection for me. In 1993, I was assisting my uncle, a low budget horror filmmaker in his own right, with a film shoot on a day when a few blocks down Burton and company were shooting a scene on Hollywood Blvd (a scene of Martin Landau and Johnny Depp walking and talking). I got to see a couple of takes and how much loving detail the filmmakers put into recreating the era, which is evident in the film with it's black and white cinematography and drunk in love with the B-movie ethic of the era tone.

The Pantages Theatre opened on June 4th, 1930. Howard Hughes purchased it in 1949 and in the fifties it served as home for the Academy Awards. In 1977 it shifted from a cinema to a live theatre venue. For the last two years Wicked has been in performance there. Three years ago, I saw a concert by a person with a slightly higher critical artistic reputation than Mr. Wood, Bob Dylan.