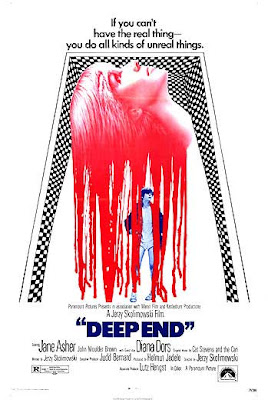 The film features one of the most insanely funny and bravado pieces of filmmaking in cinema history, a near ten minute sequence scored to Can's "Mother Sky" (one of my all-time favorite songs) set in London's Red Light district where our protagonist, a virgin teenage boy finds himself weaving through a bizarre cyclical tapestry whilst spying on, or more accurately, stalking the object of his affection which includes mass consumption of hot dogs, a one legged prostitute and the pilfering of the cut-out standee of a model; you really need to see it for yourself.

Here's a great review from TCM's Movie Morlocks blog that also touches on the wildly divisive reviews the film received during its theatrical release: http://moviemorlocks.com/2007/08/25/deep-end-1971-ripe-for-rediscovery/

Directly following Deep End, TCM will be airing The Shout, a 1978 horror film written and directed by Jerzy Skolimowski starring Alan Bates, Susannah York, John Hurt and Tim Curry that has also never been released on a Region 1 DVD. 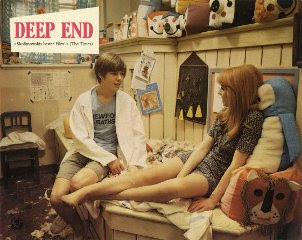 Posted by Colonel Mortimer at 10:55 AM

I really want to see this movie now

I hope TCM replays this one. I missed recording it!