The one thing that's really starting to get my goat is the proliferation of negativity on the internet. I am not a shiny, happy personality by nature, but sheesh, does the information superhighway only seem to breed the most contemptible needlessly argumentative trolls or contrarians whose desires aren't to foster a provocative and open discussion but to taunt, bully, or self congratulate themselves for their superior insight or what have you (of course to everything, there are exceptions)?

Today is my birthday, and to celebrate the final year of being in the desirable 18-34 year old range favored amongst advertisers (and as someone who used the expression "get my goat" and "sheesh" in the prior paragraph, it's likely I was never a desirable element to begin with), I am going to celebrate the art of positivity by sharing a few of the things that made my 33rd year enjoyable. 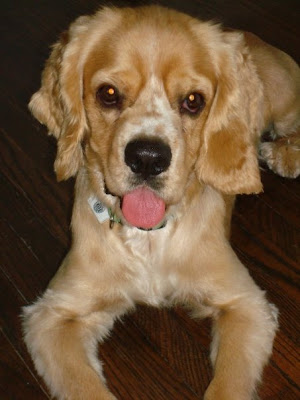 At this time last year, my wife and I were knee deep in the joys and pains of being home owners, a sea change that altered our lives. Remarkably due to being in the right place at the right time, we had another life changing event occur in July, when we spontaneously adopted a dog from a woman off the street in front of our house who was too sick to care for him. While I have owned dogs before: a grey haired poodle Sammy when I was five, our Lab/Shepherd mix Norman when I was about fifteen, this is the first time where I am one of the primary caregivers for an animal. And it's a lot of work (and money) but worth every penny and ounce of effort, seeing his little smile melts my heart, coming home and snuggling next to him brightens my mood every time, and as cliché as it sounds, in nine months time he has truly become my best friend. 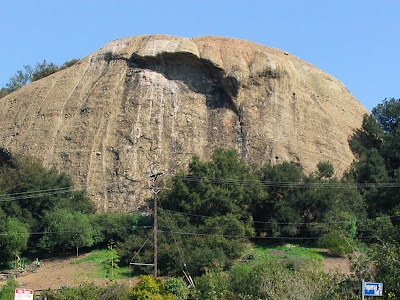 People say community and neighborhoods don't exist in the urban sprawl that is Los Angeles. I say the people who say that, probably never lived in Los Angeles. I've been lucky enough to live in three great neighborhoods in my years here, Los Feliz, Silver Lake and now, Eagle Rock, which is one of the more diverse (race, age and income bracket wise) in the city. It's equal part urban and small town sensibility. Where chain stores and restaurants exist, but more often then not, find themselves playing second fiddle to their quirkier independently ran and/or classic institution alternatives. A brief list of some of my favorites haunts of this great section of LA are (to name but a few) Read Books, Dave's Chilin-N-Grillin', Ca Cao, The Oinkster, Colorado Wine Company and Eagle Rock Lumber and Hardware. 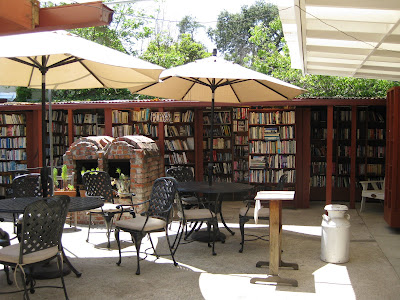 While I joked about no longer being in the desirable 18-34 year old age bracket, the fact of the matter is, I have probably been a bit of an anomaly for some time. I do not watch a single "reality show" (unless you count the occasionally catching of the Dog Whisperer), I log into Facebook about once every two weeks and I have absolutely no desire to read books or newspapers via the Kindle or the iPad. So for this past weekend, my birthday wish was to make the ninety minute trek to Ojai, CA and pay a visit to Bart's Books. Bart's is located in the outdoor courtyard of what was once a residence surrounded by a hundred plus year oak tree that features used and first edition books tightly stacked in every square inch. Pretty much any genre can be found, be it art books, cookbooks, history, modern literature or the most specific war and/or Sci-Fi curio. I spent about two hours here on Saturday and found about twelve books, all used (mostly ranging from classic literature to crime fiction) for the insanely reasonable price of $55. 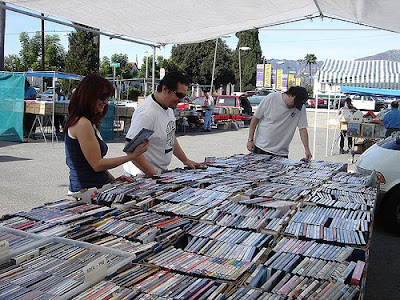 As my scaredy cat reaction to the Kindle and iPad probably revealed, I am a collector of the old school kind. I like physical product. I have sampled and download songs or albums via the internet, but without the artwork or an actual disc, be it vinyl or CD, I feel a part of the equation is missing. The Pasadena City College Flea Market, held the first Sunday of every month, is a collector's dream. Unlike the $20 entry fee to the Rose Bowl Flea Market, admission is free, and a big chunk of the sellers are inside a parking structure, making a hot summer afternoon shopping trip bearable. A big section is dedicated to record collectors, and no matter if you're looking for a brand new LP, a bootleg or, like me, cheap $1 records, you will find something interesting. And if you have no interest in record collecting, there are hundreds of vendors with items ranging from books, DVDs, vintage furniture, clothing, board games, or, and this is a recent proclivity of my wife, yard art. 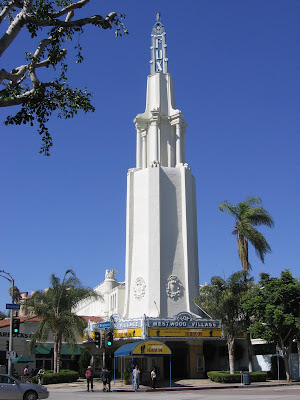 I've been meaning to comment on this, but back at the start of the month, the Regency Theatre chain took control over the classic Westwood one screen theatres The Village and The Bruin from the dying Mann chain (which is still in control of the Chinese Theatre, with possible changes developing). While geography dictates that they are difficult theatres for me to make it out to, I am ecstatic that they will still be around and promise to give Regency some business soon.

My first memories of seeing films in Los Angeles was catching a screening of Star Trek III at the Village and the opening night of Top Secret! with Val Kilmer in attendance at the Bruin back in 1984. Even with the neighborhood in a bit of economic slump, Westwood still reminds me of those formative experiences and it would be a damn shame if they were shuttered due to the Mann theatre chain's incompetence, especially in favor of the wretched Landmark multiplex. Regency which successfully ran the Fairfax theatre after it floundered for years under the Laemmle chain, before it sadly closed earlier this year due to the owner not updating the structure (in a move to sell it to condo developers...sigh, sorry, trying to focus on positive) deserves a successful venture

As for the other one screen theatres still operating, I've spent countless hours waxing rhapsodic on the New Beverly and the Vista (which I turned my mother and uncle onto in the last year!), so no need to again, other than to reiterate they are the two best managed theatres in the city. L.A still has other great venues like the Majestic Crest (in some trouble), the Chinese Theatre, the Cinerama Dome, the Silent Movie Theatre, The Egyptian and the Aero. Also, every summer, some of the old grand downtown palaces open for one-off shows thanks to the Los Angeles Conservancy Foundation Last Remaining Seats series. All these theatres have what Quentin Tarantino alluded to in Inglourious Basterds: a certain church like reverence to cinema. 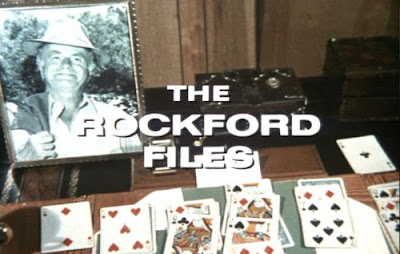 As much as I love the experience of attending films at theatres, the fact is circumstances such as working full-time and the aforementioned dog dictate that a good 70% of my viewing habit is centered around DVD, Blu-Ray and DV-R'ed fare watched at home. When I got a new LCD TV set this year, I went and purchased a Playstation 3 for its Blu-Ray player (I still own no games, and it's the first game console I've had since Sega Genesis). One of the perks with the PS3 is that if you have a Netflix account, you can view their selected Watch It Now products on your television (and a good chunk of them are actually in HD!).

While the selections are peculiar to say the least, they are filled with some interesting fare, including a big chunk of the Criterion collection and a good cross-section of recent independent films. But most intriguing is the amount of out of print or never released on DVD titles that are available, including Fat City (John Huston), The Swimmer, California Split (Robert Altman), Blue Collar (Paul Schrader) and occasionally (but not now) Rolling Thunder (which I talked about in 2007 here) pops up. Currently in my Watch Instantly queue are the out of print John Cassavettes film Minnie and Mosokowitz, the never released on DVD, Diane Keaton 1970's thriller Looking for Mr. Goodbar and the Australian horror film that got a lot of recognition in the documentary about Ozploitation, Not Quite Hollywood (which itself is on Watch it Now), Patrick.

There's also a lot of television series including the original Battlestar Galactica, Lost and Alfred Hitchcock Presents. The one series I've been working my way through is the great 1970's detective series starring James Garner, The Rockford Files. 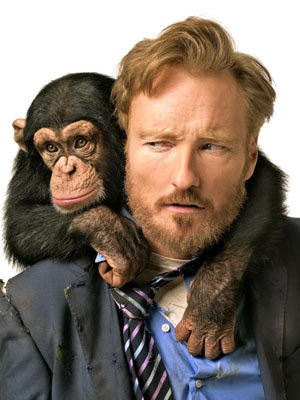 I grew up with David Letterman (whose birthday is today as well!), and remember staying up late during the summer to watch his format skewing reign on Late Night when I was in high school. And I still have a great respect for the man. But Conan O'Brien is the first talk show host that I witnessed from the beginning and share a certain kinship and comedic wavelength with. Yes, somewhere I have my VHS recorded copies of his first week of shows (he was never as bad as his earliest detractors claim, just not fully developed). When it was announced he was taking over the Tonight Show, I was generally psyched, finally the enemy to comedy Jay Leno would disappear and be replaced by actual written content over "gee aren't people stupid" man on the street gags.

Like the first year of Late Night, Conan was still testing the water, slowly ingraining his sensibility while trying to respect the history of the show and the older demographic that went with the earlier timeslot when...well you know what happened.

Through it all, Conan handled the affair with humor and dignity. His final weeks were highly energized, edgy and classy. Since being given the boot he's become one of the rare Twitter accounts actually worth reading and he's going on an American tour (which I have tickets too!!!). And today, it's been announced he will be going to TBS (really?). Not the expected move, but I will be watching, as I have been since 1993.

Thanks for reading, here's to another year of surprises and good vibes.
Posted by Colonel Mortimer at 1:05 PM

Yo Kevin, Happy Birthday!
Great blog here. That is cool that you got tickets to see Conan O'Brien.

How can you have a ps3 and not any games...come on... just get one. I recommend MLB 10 The Show! You know it must be good when Sean and I have to schedule times to play the game.

Anyway, hope your birthday was swell, and how bout them A's!?

Hey great blog Kevin. You have a lot to be happy about, you must show me around these places when we come visit this summer. And wes, I think he will buy Madden!