It was great to see the amount of discussion generated on the internet from the airing of Jerzy Skolimowski's Deep End when Turner Classic Movies aired it in January. It was great to read several appreciative articles on the film from a range of people including those who saw it in it's brief theatrical run to those whose first exposure was from that very TCM showing.

Here's my post on the subject. For those of you that may have missed it, get your DVRs, VHS or Betamax players set, it's re-airing this Friday at 11:00 PM Pacific, that's 2:00 AM for you on the East Coast. 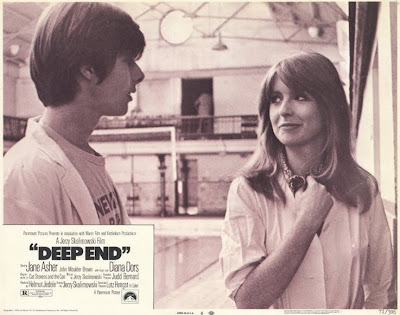 Hopefully the usually wonderful TCM will make up for the two egregious issues that I had with their January presentation. Firstly, the print was of a hideous, sub-VHS, quality. Let me state for the record this is not routine for TCM, which usually airs as pristine prints of their programming as possible. However, I know for a fact that Paramount struck a new print of the film around 2007-08 because I saw it myself at the Egyptian theatre in Hollywood. Skolimowski fills the frame with distinctive uses of color and action, so seeing a cropped image is tantamount to not seeing the film. Even worse though was a schedule glitch which caused the film to start a good five to eight minutes later than schedule, which lead to the film's ending being cut off by the DVR before the film ending. Fortunately for myself, I had also recorded The Shout, also directed by Skolimowski, so I was able to watch the last ten or so minutes, unfortunately for me, since The Shout has a running time of 86 minutes, my DVR cut off the end of the film, so I never bothered watching it. Luckily though it too is airing again directly after Deep End on Friday, at 11:45 PST (2:45 EST), and TCM has allotted an extra 15 minutes in their schedule, so that issue should be resolved.

Rumors persist that Deep End is in the pipeline for a Criterion release, which makes sense since Criterion has a history of releasing quirky oddities that Paramount distributed but have no interest in bothering with now such as Wise Blood and White Dog. When (if?) Criterion releases Deep End on DVD (and hopefully Blu-Ray) that will probably be the ultimate presentation, sans a repertory theatrical screening of course, but in the meantime, TCM is the only place to see this wonderful and unique film, hopefully this time they will do it justice. 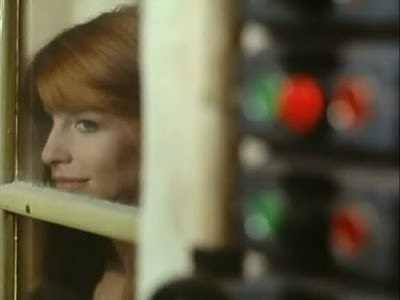 Posted by Colonel Mortimer at 11:36 AM

Thanks for the update, I have a dvr now so I am going to set it up