With t-minus five months until my self regulated end-of-year deadline for running through the films of 1980 and providing a Top Ten list, I am going to cut down on the few and far between longer reviews and instead focus on smaller capsule reviews with multiple titles discussed. I will try and make these capsules somewhat thematic...starting, next time. So here I present quick reviews of three films that have two shared commonalties: 1.) They were released in 1980 and 2.) I watched them recently. 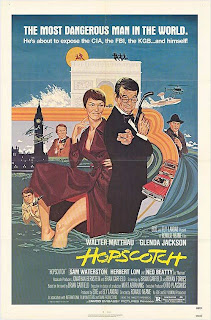 Recently passed away filmmaker Ronald Neame (Gambit, The Poseidon Adventure) directs this espionage comedy with a light touch and fast, breezy pace. Walter Mathau plays Miles Kendig, a veteran CIA agent who is reassigned to a desk position by his Richard Nixon loving boss Myerson (Ned Beatty), rather than gracefully ease toward retirement, Kendig decides to publish his memoirs instead, tantalizing both the CIA and their enemies with proofs of the chapter as he finishes them. Myerson and Kendig's replacement, Cutter (Sam Waterson), try to find and stop Kendig before he reveals all of the company's secrets, but they are outwitted at each step by their most decorated, and crafty, agent.

The Coen brothers must be fans of Neame, as for a long while they were attached to direct a remake of his twisty caper film Gambit and they used the ex-CIA agent writing his memoirs plot in John Malkovich's storyline in Burn After Reading. Neame and writer Brian Garfield (who wrote the novel the Death Wish series were based on) could have used the Coen's more wicked pen since it would have been more dramatically interesting and ripe for comedy if there was some doubt as to Matthau's sanity, or even, patriotism. Matthau's role calls to mind his titular character Charley Varrick, though less brutal, and Beatty's incompetent but blindly loyal company stooge calls to mind a devotee to the network president he cameod in Network.

Mon Oncle d'Amerique
Director Alain Resnais (Hiroshima, Mon Amour, Last Year at Marienbad) is thematically interested in no less than the entirety of the human condition in his film based on the writings of philosopher Henri Laborit (who narrates and often appears in Mon Oncle…). The film opens with a thirty minute formal frenzy introducing us to the three main characters (played by Roger Pierre, Nicole Garcia, and Gerard Depardieu--one of many films he appeared in during the year, here's my review of Loulou and The Last Metro) from birth through childhood and teenage years ultimately concluding at the age where they are comfortably settled into their career and family life. It's a dizzyingly spectacle that uses the characters as literal rats in the cage (visually depicted as such from time to time) that adhere to Laborit's philosophical beliefs. It's an ambitious, heady and unique film, and honestly, once settled into a continuing storyline in Act Two, a little tedious and clinical. Still, I can see what drew Resnais to Laborit's philosophy since it serves as a metaphor for the act of filmmaking, as characters subscribe to notions and actions previously dictated by their creators based on pre-ordained factors. 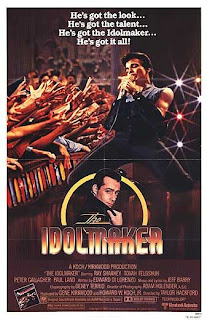 Alain Resnais is a definite auteur, creating films unique and representative of his interests and obsessions; Ronald Neame, meanwhile, is a craftsman, his films don’t always use the same language or explore the same issues, but he imbues all his films with an easy touch and a sense of humor. Taylor Hackford though is neither. He’s a director for hire without a strong authorial voice. He’s capable of good work, but usually only when the script and talent he surrounds himself with is at a premium quality. He’s had some commercial successes (An Officer and a Gentleman, Against All Odds) and a critical success here or there (Ray). I held out hope for The Idolmaker because it contains the one aspect that appears to be a constant attraction to the director throughout his career, early rock n’roll. In addition to the Ray Charles biopic, he also directed the Chuck Berry documentary Hail Hail Rock N’ Roll, and produced La Bamba, the Richie Valens biopic. So The Idolmaker, a fictitious account of an independent songwriter (Ray Sharkey) in the early 60’s who creates a sensation with two attractive singers who through perseverance and training, become superstars on the teeny bopper bubble gum crooner circuit.

But unfortunately, instead of crafting a unique depiction of the mysterious svengali behind the superstar, Hackford, similar to his work in Ray, relies almost exclusively on clichés. 60’s Italian goombas stereotypes in Brooklyn? Check. Father issues? Check. Do the singers become so popular that they think they’re bigger than the modest songwriter/producer whilst becoming embroiled in a life of sex, drugs and et ceteras? Well, I don’t want to give anything away, but of fucking course. Even the music sounds more like the overproduced early rock n’roll retro stylings of Billy Joel and the like that was popular in the late 70’s than the actual Fabian era music it’s trying to assimilate. I did like the final arc of the main character, which concerns him performing his own music, but with the exception of one earlier mention, it felt undeveloped. Sharkey and Joe Pantoliano in one of his early performances do good work, but ultimately, there’s a reason that thirty years later time has forgotten this film.
Posted by Colonel Mortimer at 8:32 PM