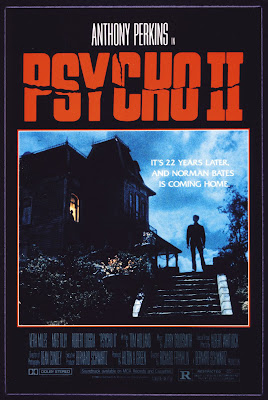 Being but a wee lad of seven years in 1983, I am unaware of the pre-release reputation of Psycho II. Was it anticipated with the same fervor and hand wringing that Gus Van Sant’s 1998 “shot for shot” remake netted? Or was that remake’s antagonistic greeting actually exaggerated due to the internet and the voices that tend to yell the loudest? Whether viewers had trepidation or not for the first (and to this point only, not counting other Psycho films) theatrically released direct sequel to an Alfred Hitchcock film, skeptics’ mind should have been put to rest when Richard Franklin was named director. Franklin, a USC graduate, career took off in the Australian exploitation market where he crafted such thrillers as Patrick and Road Games. He was a devoted follower of Hitchcock, and also a friend to him. Anyone who was afraid that the Psycho franchise was resurrected only to cash in on the then current (early 80’s) slasher craze, which of course Psycho was a progenitor of, would have their fears assuaged with the final product. Along with , screenwriter Tom Holland (Fright Night, Child’s Play) crafted a respectful continuation of the Norman Bates chronicles that both pays homage to the original film while working on its own terms.


Opening with the Hitchcock film’s most famous scene: Marion Crane’s shower and murder, serves several functions for Psycho II: it gives a pre-video proliferate age viewer another glimpse at the scene; an admittance on Franklin’s part of what he’s trying to live up to; and most importantly, a plot device, namely the impetus for the sanity hearing of Norman Bates that opens the film proper, with Marion’s sister, Lila Loomis (Vera Miles returning), yes she went and married her sister’s old boyfriend, in attendance. As the shower scene ends on the exterior of the Bates Motel, the black and white morphs into color, a subtle way of implying that this film will not necessarily be a paint by numbers replication of the original. 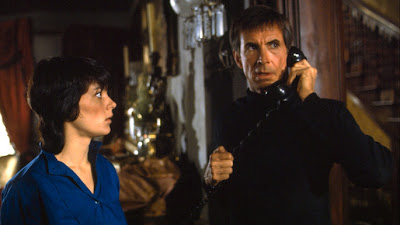 Whereas as Psycho was viewed by Hitchcock in 1960 as an attempt to get away from extravagantly budgeted works such as North by Northwest and Vertigo by quickly and cheaply shooting with his Alfred Hitchcock Presents’ television crew, ’s film is of a larger scale, and both in color and widescreen. Bernard Hermann’s wonderful bracing score, though occasionally referenced, is replaced by Jerry Goldsmith’s more ethereal and melancholic orchestral music. Dean Cundey, who shot Halloween, is the cinematographer, and while more than a few of the compositions are a direct callback to the original, he too, gives the sequel its own visual identity, the stark black and white contrast is replaced with a muted color palette. Here, we get our first look at the Bates’ house in full color and Franklin, Cundey and the production designers all do a great job of creating a lived in feel with just the right choices of clothing, linens, and other minor, yet well considered, details.

Completely ignoring the novel of the same name written by original novel author, Robert Bloch (which sounds awesome by the way), Psycho II is impeccably crafted by underrated writer . After Norman Bates (Anthony Perkins, duh) is found fit to be released, he enters society again after 22 years, literally returning to the scene of the crime where his family's motel is now a low rent locale for prostitution, drug use and other maleficences and his house is now a respite for teenagers looking for a place to fuck. Bates gets a job at a local diner where he meets a waitress in a troubled relationship with the familiar sounding name of Mary Samuels (Marie Samuels was the alias that Marion Crane signed in the Bates motel's ledger) and forms his first human relationship in a long time. Shortly though, things start to turn strange, Bates is receiving phone calls and messages from his "mother" that threaten his already tenuous sanity, and people who come in contact with him begin dying, starting with Bates Motel's sleazy extracted manager (played by Dennis Franz in the type of role he perfected throughout the 1980's). Who's responsible: is it Lila trying to get Bates back behind bars? Mary Samuels who is actually Lila's daughter acting on her mother's behalf? Or is Norman Bates losing his mind again? Could mother possibly be returning? 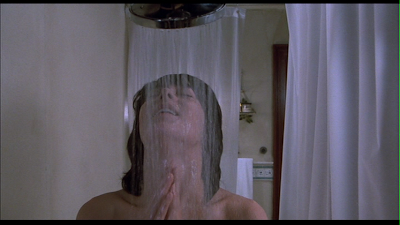 Psycho II is constructed as a mystery, but it's also a really empathetic portrait of a man trying to come to grips with his past while struggling with the present. Anthony Perkins is not the subtlest of actors, but he's perfect as Norman Bates, constantly fidgeting and uncomfortable in his skin in the first film, he's shaky and unsure of himself here. The twenty-two years added wrinkles and lines to his face, but made him more distinguished and less like the teen heartthrob he was pre-1960. In Psycho we don't realize he's the killer because he's the nervous boy next door, here we don't believe he can kill because he looks like our uncle. Meg Tilly gives an impressive performance as Mary Samuels, who is first used as a decoy for her mother's attempt to get Bates back behind bars, but comes to generally care and sympathize with Norman, she too can understand being pushed around by a manipulative mother. In Psycho, Bates compensates for sexual desires by stabbing Marion to death, here he shies away from a possible loving relationship by allowing himself to be duped into believing his mother has returned.

The film does have a few nitpick worthy moments, including awkwardly getting a knife in Norman's hand early, but most are necessary evils of advancing the story or keeping the mystery, and are easily forgivable. I am also not crazy about the "twist" reveal that concludes the movie, it reminded me a lot of the Halloween II twist, which was also a Universal Picture. However, even that is worth it for a certain moment involving a shovel.

While impossible to live up to the masterpiece that the original film is (though Quentin Tarantino actually prefers the sequel), Psycho II is a respectful tribute to Hitchcock's movie which toys with audiences expectations to provide some surprises of its own while exploring themes of recovery from scars of the past and providing a very sympathetic portrait of Norman Bates. Psycho II opened on June 3rd, 1983, where it debut just below Return of the Jedi at the box office for the weekend. It was a solid commercial and critical success, prompting another trip to the Bates Motel three years later.

Posted by Colonel Mortimer at 4:55 PM

I vaguely remember seeing the movie but your blog has made me want to watch it again. I look forward to seeing your reviews of the other Psycho movies.