The Movies Go to the Movies: Pee-Wee's Big Adventure

(note to readers: I started this article before my father passed away, when I was writing posts dedicated to Pee-Wee's Big Adventure's 25th anniversary...since it was almost finished, I decided to complete and post it)

To conclude my entirely unplanned Pee-Wee's Big Adventure tribute, four of my last five posts have included a mention of the 1985 classic comedy for those not updating their Colonel Mortimer blog scorecards, let's look at the two movie theatres that show up in Paul Reubens and Tim Burton's fantastical creation. One of which is still in operation, the other razed. 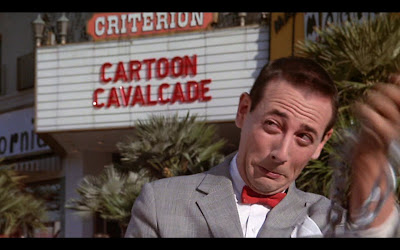 Though the shopping area stretch where Pee-wee's treasured bicycle was stolen has gone through much changes since 1985, it's no longer a strip mall but a "promenade" thank you very much, the Criterion theatre still stands. Originally built in 1924 as one the Fox chains (which includes such treasures as the Village in Westwood), the original theatre was demolished and rebuilt as a six screen multiplex in 1983. In the twenty-seven years since the Santa Monica renovation it's gone through several owners most notably Mann, who seem to be getting out of the theatre business (for further evidence look at the dire bookings the world famous Chinese theatre have had the last few years: Cats and Dogs 2 (now in it's third week!), The Book of Eli playing for nearly three months and the six week stint that Street Fighter: The Legend of Chun Li enjoyed there, four weeks more than most theatres!) and sold it to AMC earlier this year.

The marquee has changed too, and I am pretty sure the long run that Cartoon Cavalcade enjoyed in the mid 80s as ended. 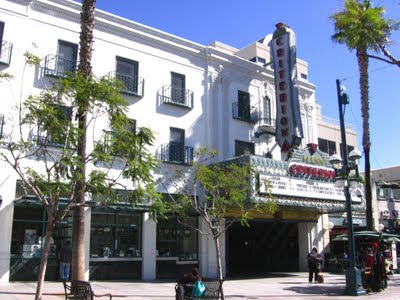 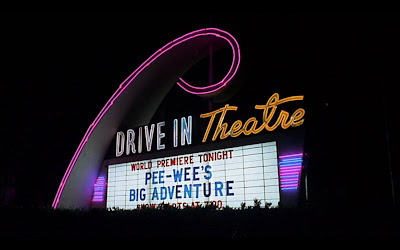 The Studio Drive-in, where the James Brolin and Morgan Fairchild adaptation of Pee-Wee's life story had it's world premiere, opened in the 1940's and sadly like so many others of its ilk, was demolished in the early 1990s, 1993 to be specific, the last double bill to perform there was The Fugitive and True Romance.

The Studio received it's name due to it's proximity to the MGM studios, currently Columbia Pictures' studio. It is now a condominium complex.

I could go on about the sad state of drive-ins, but instead of focusing on the negative, check your local listings, if you reside in California or a similar "warm weathered" state, in all likelihood you are not too far removed from one, and should make the pilgrimage, especially if you have children.

Here's the So-Cal Drive-In page for the Studio Drive-In. 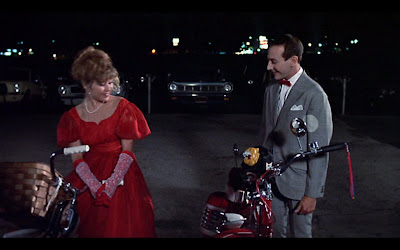 And here's a cool video shot around the time of the Studio Drive-in's final days about the history of Drive-In theatres which aired on AMC in 1993 when it still occasionally showed classic movies, not just Mad Men, Breaking Bad and later Halloween sequels.

Posted by Colonel Mortimer at 9:00 AM

That video makes me feel bad for not going to the drive-ins in a long time. Katie has never been to one, I think its time I take her to the old drive-ins.

the Capitol 6 is still around, right? you should definitely take her!!!

A fine look at this old venues. I remember going to the Studio Drive-in only once. If I went out to Culver City/Westchester, I usually took in movies at the Centinela Drive-in (which Michael Mann used wonderfully in the film, HEAT). Thanks for this.

Thanks le0pard. I have to rewatch Heat, haven't seen it since moving to Los Angeles. It might be a future entry here!

This is depressing and how sad the greed. I came of age in West LA and went to the Studio Drive-In many times. What a crying shame what has happened to Culver City (home not only to the real old Hollywood but an oasis, a real Leave to Beaver village in the middle of West Los Angeles.) So they knock down the glorious charming Studio Drive In to cram in nearly 60 ugly grossly overpriced houses.