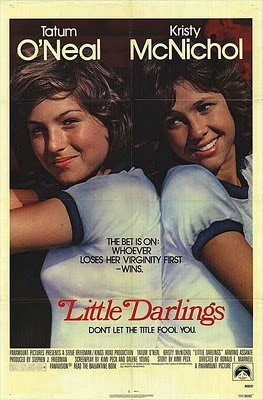 In 1980 two films dealing with the burgeoning sexual desire of teenage girls were released. Foxes, starring Jodie Foster, the Runaway's Cherie Currie and Scott Baio, is a typical morality play that employs the sensationalistic sensibilities that director Adrian Lynne would turn to box office gold later in the decade with the likes of Flashdance, 9 1/2 Weeks and Fatal Attraction. The other one, Little Darlings, is a more low key non-sermonizing sensitive portrait that rings true to life. Guess which one is readily available on DVD and which one has been held in limbo, ostensibly due to music rights (admittedly licensing John Lennon and Blondie tracks would cost a lot for a film with only a minor following), and was last given a proper release on VHS twelve years ago?

Little Darlings concerns two 15 year old girls at summer camp who are outed by their cabin mates as being virgins that agree to a bet to see which one will lose their virginity first. Ferris (Tatum O'Neal) is the product of a stuffy, upper class upbringing and her adversary Angel (Kristy McNichol) is a hard-edged tomboy living in a low-cost apartment with her single, and apparently loose, mother. They each eye their prospective virginity takers early: for Ferris it's the twentysomething camp counselor Gary, a thread that is more chastely handled than a simple plot description might belie, while Angel has her eyes set on the smoking bad boy Randy (Matt Dillion following his breakout performance in Over the Edge) at the boy's camp across the river.

What I like about the film is how despite a concept that could easily delve into some weird hybrid of Parent Trap girlie hijinks and the type of sex comedies that were de rigeur in the late 70's/early 80's, the script, filmmakers and actors always strive for honesty, and respects it young audience. It becomes clear early on that probably all but one of the other cabin mates who claim to have had sex never actually did, and even the full experience of that one is questionable; we are able to gauge through the girls' dialogue and actions that this is the case long before it's fully revealed in one of the final scenes.

The script, written by Kimi Peck and Darlene Young, though littered with humor aimed at it's intended young female audience bristles with real life experiences, and for all the trappings of it's genre, is rather solemn. Especially interesting and powerful is how the script deals with the "winner" of the contest. I won't spoil the specific details, but the film plays with expectations by having the person who does not lose her virginity be named the contest winner by misleading circumstances, while the person who does have sex decides to keep it secret, thus losing the contest. It's a knowing admittance of how actually becoming sexual active matures and changes you, and what we see of the act is awkward and eventually too private to be shared.

While director Ronald F. Maxwell is no cinematic stylist wiz kid, his follow up films include those two long Civil War movies Ted Turner funded (Gettysburg and Gods and Generals) and, of course, a 1986 Disney Channel sequel to the Parent Trap, he's got a knack for pacing, subtle touches, balancing tonal shifts and getting good performances from child actors. Tatum O'Neal may have been the Academy Award winner, but Kristy McNichol provides the film it's most honest performance.

Little Darlings occasionally pops up on Showtime and/or The Movie Channel. Hopefully it will be added to Netflix Instant Watching after the merger that has placed a large portion of Paramount's back catalogue online, and perhaps the in-development remake being produced by J.J. Abrahams will garner enough interest in the original to finally mark it's home digital format debut in a move I like to call "the only good to come from that remake of The Stepfather".
Posted by Colonel Mortimer at 5:00 PM

Sounds like another good movie I need to see! Hope I can find it somewhere.