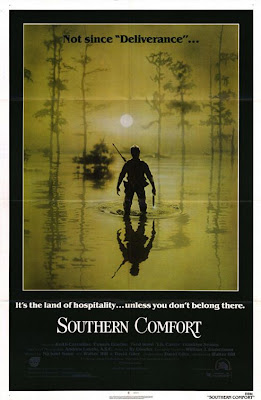 Deliverance, the 1972 John Boorman directed adaptation of James Dickey’s suburban male survivalist tale, became one of those films like Jaws or Halloween that saw an influx of imitations following in its wake. Itself a modern day take on the Richard Connell’s story “The Most Dangerous Game”, the appeal of the basic template is letting a cross section of men (educated, gym rats, chubby) and pit them against locals (mostly from the Southern part of the United States) who abide by more antiquated and simpler instincts and the elements. Out of all these Deliverance followers, one of the best is Walter Hill’s Southern Comfort. The basic framework is there, but thoughtfully tweaked through the culpability of the “protagonists” themselves, and their military training, which provides a subtext of a microcosm of the clusterfuck that was Vietnam.

It’s Louisiana 1973, a National Guard troop featuring a bevy of great characters actors like Keith Carradine, Powers Boothe, Fred Ward and TK Carter, is being lead on a routine trial run (aren’t they always routine?) by their captain (Peter Coyote) in the bayou. Armed with heavy artillery loaded with only blanks (representing impotence…a key subtext of the film) yet completely under prepared, even for a trial run, they encounter a river sans any means of crossing. Seeing some docked canoes, they decide to abscond with them, figuring the importance of their mission (reminder: a trial run) far exceeds any other possible purpose. Mid-way through their trip, the owners of the vessels, bayou dwelling Cajuns, return, and not knowing any details, yell and scream like anyone who catches a thief in action probably would. A National Guard member responds not with explaining words but by firing a loud round of blanks from his machine gun. The Cajuns respond by shooting their guns, the type with actual bullets in them, and murder one of the Guardsmen. Tensions escalate as the troop is obviously lost in an unfamiliar land and begin to unravel psychologically.

Set while the conflict in Vietnam was still raging, the film serves as a microcosm for the myriad of circumstances (i.e. generally being lost in unknown land, unprepared and undermanned) that led to the malaise that was America’s involvement in Vietnam. Primary being a complete and utter inability to communicate, how could one expect the lines of communication to persons in another continent, when even native Louisianans cannot understand one another based upon dwelling location? The film also deals with a very American sense of entitlement as evidence in the film’s instigating moment, the taking of the canoes. The majority of the men don’t let their artillery impotence prevent their machismo impulses, revealed when coming across a Cajun in the bayou (the wonderful character actor Brion James), unable to deduce with certainty his involvement, but guilty by association, the men convince themselves to take him hostage, and one particular maverick amongst them destroys the man’s humble home.

Hill and his co-screenwriters Michael Kane and David Giler do a wonderful job creating realistic and fully realized characters that also serve as symbolic archetypes of masculinity. They are aided in this cause by a game cast of hungry actors who bring a verisimilitude to their performance that increases the already intense atmosphere. Every character is flawed in one way or another, even our alleged “good guys” Charles Hardin (Boothe) the fish-out-of-water member of the team, he’s from Texas, who slowly begins to give into his more paranoid thoughts, and Spencer (Carradine) who maintains a lackadaisical disposition even under the most inappropriate circumstances. As the journey home extends, all the men grapple with such issues as an inability to lead, catatonia, racism, and their most psychotic impulses coming out from beneath the surfaces.

This was the fourth in what is quite an amazing streak of five great films over the course of five years for director Walter Hill (preceded by The Driver, The Warriors, The Long Riders (my review) and followed by 1982’s 48 Hrs.), and his assuredness oozes from the screen. Smartly, he makes the decision to never give the viewer a clear shot of the Cajun persuers, so when the surviving members of the troop come across their potential nemesises, we are in the same position as they are: uncertainty. Hill imbues a strong sense of atmosphere through location shooting and is as skilled at manufacturing suspense as any of his peers. Ry Cooder provides an appropriately spiced score that is both minimal and effective.

The film that this most resembles in Hill’s oeuvre is The Warriors, a group of men just trying to get home, faced with well-armed groups attempting to prevent that very goal. While not as iconic as that film, nor Deliverance which it shares some spiritual connections, Southern Comfort deserves to be remembered thirty years on and is still relevant today as the allegory intended for Vietnam could be substituted for any war that followed and men are still lead by their base masculine impulses. I highly recommend it!
Posted by Colonel Mortimer at 8:31 PM

Caught this On Demand a while back and thought it was a pretty good flick.

Excellent review of this film, Colonel. While it's generally acknowledged today as another of Hill's highly underrated films, SC didn't do much at the box office. And the Vietnam War microcosm you deftly wrote about may have contributed. Like many of the early Vietnam War films, the subject was too painful and recent (our involvement only ended in April 1975). Many good films faded quickly away in the years that followed because of this subject matter (even if in this case it was symbolic). That would change in the mid-80s, but it may have cost this filmmaker's really amazing picture the success it deserved. I'm really happy to hear you're another who appreciates it, Colonel. Thanks.