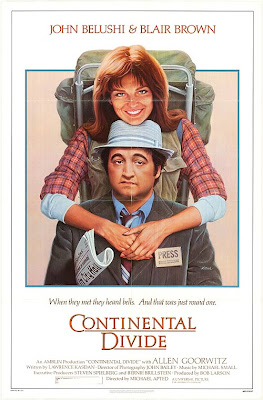 There seems to come a point in every successful comic actor’s career when they want to display their range as an “actor”. No artist, or person for that matter, really wants to see themselves limited by labels. Bill Murray (Razor’s Edge, Lost in Translation), Steve Martin (Pennies from Heaven), Adam Sandler (Punch-Drunk Love, Spanglish), and Will Ferrell (Everything Must Go) are just a small number of examples of people who satiated this urge. And the switch from comedic to dramatic is actually less of a major shift than the opposite since comic actors, especially those who worked heavily in the sketch medium, need to hone dramatic chops to better skewer a wider range of targets. When the role and the right actor mix, the results can be amazing, like the humanity Jim Carrey brought to his role in Eternal Sunshine of the Spotless Mind. But if the material’s weak, there’s not a strong director providing a guiding hand, and the actor is left flailing, you get The Number 23. In 1981, John Belushi was definitely feeling the pull to expand the roles he was being offered. He switched roles with Dan Aykroyd in Neighbors (reviewed yesterday) and played the straight man. His penultimate film, Continental Divide, is not too far of a stretch in that he plays a sarcastic blowhard prone to the occasional pratfall, but did add something to his repertoire that wasn’t present in either Animal House, 1941 or Blues Brothers, a chance to play a romantic lead.

John Belushi is Ernie Souchak, a boisterous editorial commenter for the Chicago Sun-Times, hero to the working class, as well as pimps, prostitutes and muggers who respect his fiery articles so much they give him back his wallet after the realize who he is, and enemy to crooked politicians who run rampant in City Hall. After being attacked by the underlings of one of his subjects, Ernie’s editor sends him to the Rocky Mountains to hide and study the case of Nell Porter (Blair Brown), a Bostonian who gave up the city life to study, photograph and protect bald eagles. Living together in a secluded cabin in the Rockies, Ernie and Nell bicker and argue. But will they set aside their differences and find that opposite attract? Spoiler: Yes.

Written by Lawrence Kasden, who had a busy 1981 as he also wrote the screenplays for Raiders of the Lost Ark and his directorial debut Body Heat, Continental Divide is a bit of a throwback to the romantic comedies of a 1930s to 50s vintage, the type of film that perhaps Cary Grant would star in or Howard Hawks would direct. And actually, Hawks did direct a somewhat similar film in Man’s Favorite Sport with Rock Hudson as a sporting goods salesman who has no experience with the outdoors and must learn how to use many of the goods he sells from Paula Prentiss. While Belushi and Brown give decent and sometimes even charming performances as the mixed match lovers, the film feels inert. Noted documentary filmmaker and not so noted featured filmmaker Michael Apted is the director, and while everything is paced fine, there’s a sense of just going through the motions as we witness some of the laziest fish of water tropes. The romance is rushed, and every few moments an injury occurs to Belushi to keep up some kind of physical comedy quota. There’s some nice cinematography capturing both the Rockies and downtown Chicago, but those are probably more a product of the locations than any actual great cinematic achievement. The rest of the film is purely by the numbers point and shoot filmmaking. It does, however, come alive and actually contains something of a complex emotional question that most films concerning an opposites attract relationship ignore: How do two people with such disparate beliefs that only truly feel at home in different parts of the country/world maintain a long-term relationship? The resolution is kind of pat and simplistic, but it’s a rarely touched upon subject, and it leads to the film’s most lively moments, when the couple just can’t say goodbye to each other on an Amtrak train (even the presence of a train as primary mode of transportation feels like a throwback in 1981).

Though, like Neighbors, Continental Divide, is kind of forgotten today (though more readily available via both DVD and currently Netflix Instant), it has one significant benchmark, it’s the first film to be made through Steven Spielberg’s Amblin production company (though the famous E.T and Elliott on the bicycle silhouettes logo is missing, seeing how E.T. would not be released for another year). While neither of his final two films were particularly successful either commercially or critically, Belushi deserves credit for wanting to expand his range and it would have been interesting to see the type of roles he would have gone onto had he survived. Even though his drug addiction was escalating out of control, he had a desire to reshape his career. He was in the process of getting Noble Rot, a comedic adventure set in the milieu of Napa Valley wine vineyards, he co-wrote with Don Novello (SNL’s Father Guido Sarducci) off the ground. And his buddy Dan Aykroyd had written the role of Peter Venkman for him in his sci-fi/action comedy (and future blockbuster) Ghostbusters, though there’s no denying that Bill Murray’s smart aleck/sarcastic take on the character was a large attribute to that film’s success. Belushi showed fleeting moments in both Divide and Neighbors (more so the former than the latter), and was probably a good script or strong visionary director away from busting free of the Bluto stereotype.
Posted by Colonel Mortimer at 7:49 PM

Fine review, Colonel. I remember this one, but not very well. Belushi continues to fascinate with what could have been.

I also liked Ferrell in Stranger Than Fiction in a less comedic type of role. Sounds like Belushi was at least trying to take on different roles in the two movies you have reviewed, sad that he was lost before he found a better movie try this in.