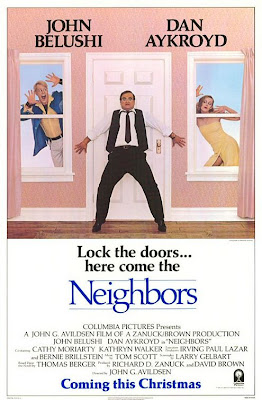 By the time 1981 rolled around, John Belushi had really only been in the public conscious for about five and a half years. And truthfully, when Saturday Night Live did premiere, the onus on cross-over potential was placed on Chevy Chase. But after Chase bolted midway into the second season, Belushi assumed the role of the show’s alpha-male. A diverse comedic talent, his frequent appearances on Weekend Update as a blowhard version of himself along with his breakthrough role in John Landis’ smash hit Animal House would cement his persona in the public eye as the chaotic loudmouth fat guy prone to pratfalls. So when it came time to cast Neighbors, his third collaboration with fellow SNL alum and good pal Dan Aykroyd, about a middle aged suburban schlub terrorized by his new obnoxious and chaotic next door neighbor, it seemed an obvious choice who would play who. However, before shooting commenced Belushi and Aykroyd flipped roles, and clad in the height of K-Mart fashion and with greying sideburns and temples, Belushi took the role of the everyman while Aykroyd played the bleached blonde, tattooed, polyester suited agent of chaos who turns his life upside down. Both performers are capable of playing either role and well, but here they bring nothing but painful straining attempts to eke laughs out of the thin material. In their defense they’re not given actual characters for which to play or motivation to latch upon, and director John G. Avildsen’s directing seems to consist of one principle: “just riff guys”, with the result on the level of outtake rehearsal footage.

Earl, a middle class suburban husband/father (Belushi) lives a quiet undistinguished existence in a small cul-de-sac surrounded by power lines that consists of only two houses. His life revolves around watching nature documentaries on public television and late night meals of burnt waffles with his wife (Kathryn Walker). Until that is, he's shaken by the introduction of new neighbor Vic (Aykroyd) who instantly torments, hassles and steals from him, and Vic’s sultry wife Ramona (Cathy Moriarity) who entices Earl with sexual advances. And then, uh wackiness ensue, I guess.

Larry Gelbart, writer/producer of MASH and Tootsie, is credited as the screenwriter here, but I am going to go out on a limb and guess that any attempts at a sound narrative structure were tossed out the window at an early stage. Everything seems improvised on the spot, and poorly at that. Not that I am slave to the Syd Field perfected beat for beat formula for a successful screenplay, especially in comedy. Some of the greatest comedies from the Marx Brothers to Anchorman have very thin strains of plot amongst several comedy beats, but even those examples are slavish proponents of the three act structure compared to Neighbors, which commits the greater sin of being groaningly unfunny (I laughed once, at the sight of Belushi holding coffee grinds in his hands…you kind of have to see it.) As mentioned earlier, there’s no recurring characteristics to any of the film’s roles, and characters completely change desires, personalities and motivation from scene to scene depending on the situation. Belushi’s Earl seems to be unhappy but comfortable in his existence, but also seemingly equally annoyed by his new characters, so when the final act shift occurs it’s completely inorganic and forced. There’s never any reasoning for the antics of Vic and Ramona. The basic tenant of conflict is two forces with contrasting desires coming to confrontation. While conflict is the driving force of the film, the rest of the equation is completely missing. Watching Neighbors, I couldn’t help but compare it to a much more successful film that also is entirely set on one suburban cul-de-sac, Joe Dante’s The Burbs. In that film you had a clearly defined lead character, a purpose for his concern, and a contrasting force with motivation, not to mention several smart and funny jabs at the suburban milieu.

John G. Avildsen, best known for his directing of inspirational sports theme movies (including Rocky, the Karate Kid films, The Power of One and Eight Seconds) has no feel for comedic setups. He shoots things carelessly, not cognizant of the rhythms comedy requires. He was coming off the thriller The Formula, where he worked with two of Hollywood’s most legendary difficult actors, Marlon Brando and George C. Scott, so perhaps having experienced that and with no real prior comedy background, he just left Belushi and Aykroyd to their own devices, and trusted the results. Still Avildsen and Belushi clashed, and I imagine the resulting film is evidence of the two men's indifference. Avildsen’s old Rocky composer Bill Conti, provides the film with one of the worst and most distracting scores in cinematic history. Witness effect heavy comedic noises that substitutes for laugh tracks! Theremin for when something wacky occurs! Et cetera. The costume and set design is pretty perfectly realized though.

Sadly, Neighbors would be John Belushi’s last film, he would be dead three months after its release from a heroin overdose. Columbia Pictures and the very successful producing tandem of Richard Zanuck and David Brown (Jaws, The Sting) had high hopes for the film, penciling it in for their big Christmas season release in 1981. After bad test screenings they increased the screen count in an attempt to accrue as high a gross as possible before word of mouth spread (a practically automatic technique today), and the film was moderately successful though critically lambasted. For a film with the pedigree it had: Director of an Oscar Winning film, the Brown/Zanuck team, two of comedies biggest stars at the height of their fame and the head writer of one of television’s most successful sitcoms, Neighbors pretty quickly faded from public consciousness. It was never given a DVD release, though a High Definition print does exist, as I saw the film via a broadcast on Sony HD. Unfortunately, and I am still of the opinion every film should be available in an easy to access print of some sort, this is one of the times that the film is probably better off forgotten.

Posted by Colonel Mortimer at 8:02 PM

Sad to see a movie like this with tons of talent on and behind the screen come out so bad. Thanks for the interesting write up, I think I will pass on seeing it. In fact, I never once had heard of this movie before I read your blog right now.

LOVE this film! It's so strange and offbeat. While certainly not perfect, Belushi and Aykroyd give brilliant comic performances - Belushi is quiet and understated - Aykroyd wonderfully bizarreo. The film has wonderful little subtle touches as well (Aykroyd is often the voice of the strange ads emanating from Belushi's TV - and that strange toy Folkker with a little blonde Aykroyd seated inside. Just great stuff!