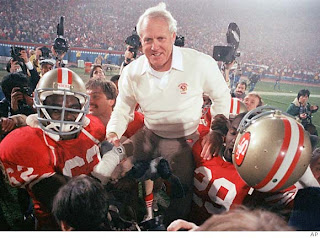 As I have said before, my very first recollection of any football game was the 1982 NFC Championship game between the Dallas Cowboys and the San Francisco 49ers, what is now affectionately referred to as either "The Catch Game" or "The Game That Launched a Dynasty". For the first six or seven seasons that I was cognizant of the game of football, I was lucky enough to root for a team that was coached by William Ernest Walsh, I will consider myself lucky if another 49er coach in my lifetime has half the amount of football savvy or brains that Mr. Walsh possessed.

He is referred to as "The Genius", but genius is a word that gets thrown about too carelessly this days, so I wish to posthumously redub him either "The Architect" or more aptly, "The Artist". Bill Walsh is to the NFL what Orson Welles is to cinema, what Bob Dylan or Miles Davis are to music, what Frank Lloyd Wright is to architecture and hell, what DaVinci was to art (or codes, even). A person who saw past the limitations of his profession and reinvented the form. A person whose distinct influence is more persuasive today then it was in his tenure. Someone whose methods were once considered strange or controversial and today are considered the standard. The NFL is what it is today, the most dominant sporting league in America by a tremendous margin, thanks in large part to Walsh's offensive schematics that changed league emphasis from a primarily run first philosophy to passing early and often. To paraphrase a famous commercial "Chicks dig the Touchdowns!" His "West Coast Offense" spreads across the continent.

Even today, nineteen seasons after he retired from the 49ers, several of his coaching assistants are currently head coaches around the league, including Super Bowl winning coaches Mike Holmgren, Mike Shanahan and Brian Billick, what more several of these disciples have seen their assistants become head coaches, the Walsh family tree envelopes at least half the NFL. But what I think best displays Walsh's influence on not just the NFL but the sport itself, the University of Nebraska, the program who made prominent the option quarterback who throws about five attempts per game and prided itself on punishing defense and as an institution for strong runners (including 49er alums Roger Craig and Tom Rathman) is now operating out of the West Coast offense.

He was the best coach ever. We will all miss him.