The Movies Goes to the Movies: True Romance 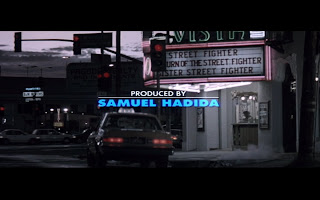 "So we'd both fuck Elvis? It's nice to meet people with common interests."

The quality of these picture leaves something to be desired, especially since within the frame is a mistake worthy of the old Premiere Magazine "Gaffe Squad" feature. In the upper mid-frame, just left of the marquee, you can see that we are at the corner of Hollywood and Sunset Blvd. An intersection I assume you won't find in Detroit; to wit: the first act of True Romance is set in Detroit (again, if this snapped shot came out better you could see Detroit written in the taxi light), but like many productions, certain scenes set in one place were shot elsewhere, in this case Los Angeles, including this exterior shot of the Vista Theatre's marquee. 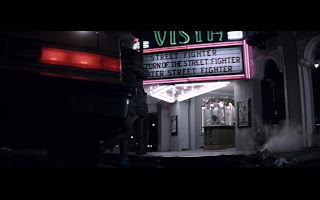 While it doesn't have the world renowned reputation of the other still operating, first-run, one screen palaces in town, Grauman's Chinese and the Cinerama Dome, the Vista is just as worthy of your dime (a dime that will actually go further since admission for evening shows are $8, a full three or four dollars cheaper than those other ones) for many reasons: a.) Unlike those two, it is neither connected to a shopping center nor operated by a corporate chain. It is a bonafide neighborhood theatre and subject just as much to the whims of its clientele as it is the whims of the studios. {A personal note, it is the only movie theatre within walking distance from my place.} b.) Thanks to renovations between 1998-2000, the exterior and interior were restored to their former lavish Egytpian inspired decor. If you have been to the Vista, compare the current state of the auditorium to the framegrab below that predates the renovation. c.) This may apply only to taller readers, but your 6'3" author appreciates the legroom they offer, it appears as if every other row of seats have been removed. d.) Charm & Presentation--I get the feeling the Vista is aware that it is the red-headed stepchild to the Dome and Chinese, yet it embraces this stature. The front of the theatre features names in footprints, but you won't find Marilyn Monroe or Harrison Ford's prints, no, you get such B and cult movie luminaries as Forrest Auckerman, Bud Cort and Elvira. They still do the opening of the curtain before the feature. And the manager, who has been with the company for 20 years usually dressing in appropriate to the feature playing there costume when he takes your ticket. For example, he was dressed as a cowboy when I saw Brokeback Mountain there and in both a Superman and Iron Man outfit when those played. 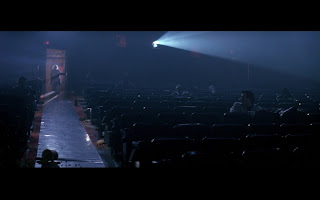 The Vista Theater opened in 1923 on what was once the set of D.W. Griffith's silent epic Intolerance. It has gone through several identity changes in it's eighty plus years: it's served as a vaudevillian stage, a first-run premiere showcase, a second-run theatre, showed gay pornography in the 1970's, was a repertory theatre in the 1980's. Currently, once gain, it books first-run major studio and independent fare. It's many reinventions matching those of the neighborhood itself throughout the years. 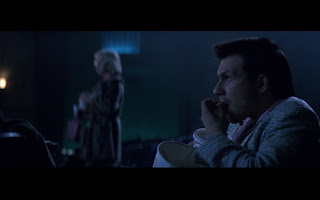 As for the film, I was somewhat hesitant to revisit it for the first time in over a decade, it meant a lot to me as a teenager, and sometimes when nostalgia and reality collide, nostalgia is the worse for wear. However, True Romance has aged gracefully. Lover of the quick edit and over-the-top tinting, director Tony Scott shows remarkable restraint, allowing the script and the performances to the forefront, well, with the exception of the action sequences, where his penchant for theatrics reveals itself with his need for utter destruction of any and all peripheral objects in the room to amp the experience. To paraphrase a famous Navin Johnson quote "Aquariums. This guy hates aquariums!" The film still feels fresh, I especially appreciate the way it allows itself moments of distractions, most famously in the Dennis Hopper-Christopher Walken "Sicilian story" which is still a highlight even while it keeps us from the main storyline for a good five plus minutes. True Romance is the meeting point of two forces, where the independent an innovative film literate world of screenwriter Quentin Tarantino encounters the big blockbuster action milieu of director Scott, yet it is Scott's instincts, including employing a more basic structure than the fractured narrative in Tarantino's original script and adding an appropriate and earned happy ending, both of which are dead right for its dreamy cinematic tone. Its a loving tribute to and mosaic of American cinema: romance, road trip, action, comedy and fantasy, specifically male fantasy--a comic book store working, kung fu movie worshiping geek meets a beautiful woman who loves everything about him, and together he becomes the Elvis like badass of his own action story. Special note should be given to the actors who all give energetic and note perfect performances from the leads Christian Slater (who is so charismatic in this and Heathers yet so stilted and uninteresting in most other performances) and Patricia Arquette through the supporting cast many of whose roles equal little more than cameos, including the aforementioned Hopper and Walken as well as a brutal pre-Sopranos James Gandolfini, a post-Perfect Strangers Bronson Pinchot, Michael Rapport, Val Kilmer (whose face is never even fully seen), a hilarious Brad Pitt, Saul Rubinek, Gary Oldman, Samuel L. Jackson, Chris Penn, Tom Sizemore, Kevin Corrigan and Paul Ben-Victor (character actor extraordinaire probably best known as the Greek's right-hand man in The Wire).

Simply put, True Romance and The Vista represent two of the reasons I love cinema. 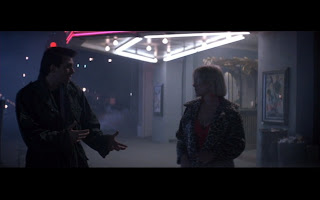 For more information on the Vista Theatre, here's it's entry at Cinema Treasures.

Posted by Colonel Mortimer at 11:36 PM