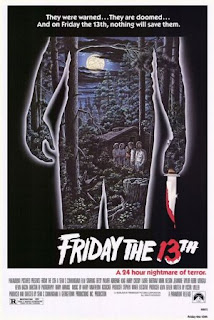 I'd be remiss if I skipped another Friday the 13th without paying homage to the film series that helped increase awareness of the peculiarities of this date.

The first experience I've ever had with the horror genre was at the age of seven, when late one night I snuck into the kitchen and caught a few minutes of Friday the 13th part III which my father was watching on Betamax in the living room. Obviously, my life was forever altered. It wasn't until part VII (The New Blood) in 1988 that I was able to see a Friday the 13th film theatrically, though I do remember catching some scenes from part VI by ever so slightly contorting my head in the direction of another screen at the Drive-In when I was ostensibly watching Howard the Duck. True story! What's more, I actually kind of liked Howard. Hey, I was 10.

So in tribute to the series that I had memorized as a teenager, I am posting this video I found on YouTube that features every kill scene from every Friday movie. This video is obviously not safe for work, unless, of course, you work as a counselor for Camp Crystal Lake, in which case, please study the footage and use it as an educational tool.

And because it wouldn't be Friday the 13th without a quickly produced follow-up, here for you title sequence enthusiasts are the opening titles to each film:

I particularly enjoy the fidelity in the usage of the boldly fonted title fast approaching the screen in the first three films (crashing into and breaking glass in part I, exploding in part II, comin' at you third dimensionally in part III). For part IV aka The Final Chapter, judging by the way the title is written, the graphic design budget must have been cut severely, however slight redemption comes by way of having the subtitle collide with Jason's hockey mask causing a dramatic explosion!?! (Kids remember, the combination of hockey masks and titles may cause combustion!) For part V aka The New Beginning, they bring back the original title font but the twist this time is that the hockey mask collides with the title causing the explosion (see, it is a new beginning after all). Part VI, Jason Lives, features the awesome Bond reference as well as two firsts: the first time the size of the subtitle is exponentially larger than the Friday the 13th portion as well as the first time the font in the title was represented in the scrawling manner matching the type on the posters. This would be replicated in the title sequences of part VII (which this time has the hockey mask crack in half) and part VIII, which is the first time the title is printed atop an actual filmed image, stock footage of Times Square circa 1989. The less said about the cheap computer graphics utilized in the three New Line films, the better. 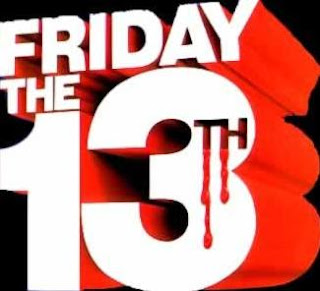 Like any good zombified homicidal maniac, you can't keep Jason away for long, the series will get a reboot next year when Michael Bay's production company, Platinum Dunes, will release a remake. Yes, that's the same company that has released remakes of Texas Chainsaw Massacre, The Amityville Horror, The Hitcher and has remakes of The Birds (gasp!) and Rosemary's Baby (double gasp!!) in the pipeline. You may remember their company credo: "Original Thought? Yo, Fuck dat noize!" 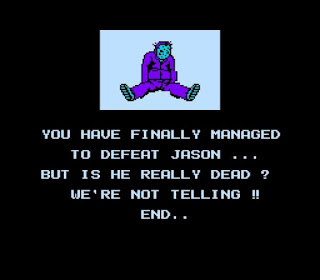 Posted by Colonel Mortimer at 8:47 AM

I remember watching your old tapes you left and seeing a lot of the movies. always good for what they are worth. its always fun to rent a bunch of them every few years and just have a good time. hope you had a good friday the 13th.