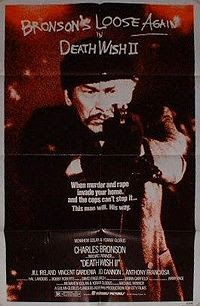 Death Wish II (1982, Michael Winner)
In my review of Death Wish, I complained of director Michael Winner’s half-hearted third act attempt to suddenly position main character Paul Kersey's (Charles Bronson) actions as that of a deluded man who believes he’s living by the ethos of the Wild West after providing no earlier evidence supporting this. Death Wish II* which reunites Winner and Bronson, as well as co-star Vincent Gardenia as the detective on his trail, is a superior film for the fact that it actually utilizes the structure of a Western film and makes less attempts at being a legitimate social study, resulting in a film that is focused on the strengths of the director.

The Western archetype plot of DWII to wit: A reformed gunslinger (architect cum vigilante Paul Kersey) moves to a new town-Los Angeles (apparently having grown tired of the lack of attacks upon his loved ones in Chicago, the city he relocated to at the end of DWI), where he’s thrust back into action against his wishes for a new life when his close ones (specifically maid and daughter) are once again the victim of a brutal assault. If you would like to look at it in a more modern genre prism, you can make the claim it also conforms to the mechanics of a super-hero film; a mild mannered everyman hellbent on personal vengeance arms and disguises himself (his outfit consisting of a beanie and dark workingman clothes befitting a repairman, which in and of itself is a metaphor), to combat villains and keep the streets safe for the helpless.

In the first film, Kersey is not present when his wife and daughter are attacked (which resulted in the death of the wife and the daughter becoming catatonic) but in the sequel he is at home when his maid is raped and killed followed by his catatonia recovering daughter being kidnapped (she too will be…surprise, surprise…raped…and eventually leap to her own death in an escape attempt), so his vigilantism is focused this time around on the specific members of the (very P.C.) multi-cultural gang of hoods responsible (a post Apocalypse Now Laurence Fishburne filling the Jeff Goldblum role of the gang member that would go on to future fame). This helps to alleviate one of the more distressing issues of the original where Kersey never went after the actual gang that attacked his family, and who coincidentally were all Caucasian, instead choosing to randomly bait hoods who happened to be predominately African-American, and murdering them for the sins of the responsible. While I don’t doubt a compelling social study of the irony of Kersey’s action could be made, Michael Winner surely isn’t the director to perform such a subtle critique.

Where the first film strives for legitimacy (people as varied as Clint Eastwood, Paul Newman and even Gregory Peck were mentioned for the role of Paul Kersey) and failed, the sequel has no such allusions. Perhaps due to the change of producer from mainstream schlockmeister Dino DeLaurentiis to low budget schlockmeisters team Yoram Globus and Menaham Golan (founders of Canon, the predominate Action B-Movie distributors of the 1980’s and home to the likes of Bronson, Chuck Norris and Michael Dudikoff) or perhaps due to the repetitive nature of the plot there is very little set-up or character building and within the first fifteen minutes Kersey’s life has been (re-)shook and he's roaming the streets for vengeance, set to Jimmy Page’s score. In my review of the first film I mentioned the laughable nature of the plot-driving rape scene, laughable not because of the severity of the actions obviously, but rather Winner’s inept presentation of the severity of the actions. That very ineptness is far more disturbing here, as the camera leers on the naked flesh of the stripped female victims in the gaze of the attackers.

While his inability to achieve a modicum of gravity reaches it’s nadir here, once we get to what we came to see—namely Bronson mowing down punks—he actually becomes a tight director and dramatically improved from his work on part one. Scenes are imbued with a palpable sense of suspense that was sorely lacking, some choice real location shooting and even some mood inducing lighting and shot compositions. Again, much like the New York of the mid-70’s, Winner paints the Los Angeles (specifically downtown and Hollywood Boulevard) of the early 80’s as being rife with decaying streets of rat-infested abandoned buildings where you can be murdered for looking at the wrong person, which in comparison to what Hollywood Boulevard is today, a corporate mall rife with nightclubs and infested with frat boys, Valley girls and wannabe reality stars actually counts as an improvement. To his credit though, unlike the first film where the poor are all coded as being potential murderers, muggers, rapists, et cetera, he does provide evidence of people in financial dire straits seeking salvation in makeshift storefront churches or just scraping about trying to make a living.

At the end of DWII (spoilers to obviously follow) Kersey has succeeded in eradicating the gang responsible for the attack, however, it comes at a cost, his chance for redemption when his fiancée, who is one of them rehabilitating criminals** believing bleeding heart liberals, leaves him after discovering his little after-hours hobby. Unlike the end of the first film where he was given an ultimatum to leave New York (and after all the shit that went down, why wouldn’t he?), Kersey’s action do have a consequence and he must face what his deeds have reaped. The last scenes show Kersey once again roaming the streets of Los Angeles, rejecting his chance at a legitimate everyman life. One hopes that Michael Winner follows suit and cast aspirations of serious filmmaking aside to play to his strength, exploitation filmmaker extraordinaire. We’ll find out, the duo reunited three years later for Death Wish III.

* I know this is petty but it still gets my goat: the DVD and it's menu lists the film as written with the digit 2, when the film clearly uses the Roman Numeral II