Rio Lobo, director Howard Hawks' final movie and his fifth collaboration with both actor John Wayne and screenwriter Leigh Brackett, is along with Land of the Pharaohs, the only film of his I've seen (IE what's readily accessible on DVD) that I could not grant even a meager "thumbs up". A G rated western (with an admittedly rating busting final shoot-out) seems positively quaint in 1970, two years after Sergio Leone's landmark post-modern masterpiece Once Upon a Time in the West and one year after Sam Peckinpah's ultra-violent requiem The Wild Bunch, and considering the clever temperament of Hawks' other work "quaint" counts as a dirty word. Rio Lobo suffers from a sense of redundancy, as John Wayne, clearly going through the motions here, is once again teamed with a young hot-shot(Jorge Rivero's no Montgomery Clift, Ricky Nielsen or James Caan), a snappy gal (comparing Jennifer O'Neill to Angie Dickinson is no fair to anyone) and a cagey old-timer (Jack Elam, who is the highlight of the entire cast), I guess they couldn't work in a drunk in need of redemption. The plot also recycles for the second time (the superior El Dorado being the other) the classic template created by Brackett in the screenplay of Rio Bravo.

But the poster....man it's beautiful, focusing on the film's highlight, the climactic battle, this painted work's framing recalls to mind the iconic final shot of John Ford's The Searchers and promises a raucous good time with it's hell-bringing and all. Sadly, there will be no hell giving to be found here. 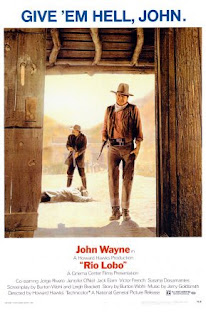 Does anyone know an online reference to find poster artists? I would like to credit the person who came up with this image.
Posted by Colonel Mortimer at 9:20 AM

yes thats a cool poster, i like the painited posters a lot more then the picture ones, or just one with images. we should start a list of our top 10 posters of all time! i have some in mind already.