Pictures from The Road

So what's the over/under on the amount of movie reviews for this November's release of The Road that will be titled "No Country for Any Men"? 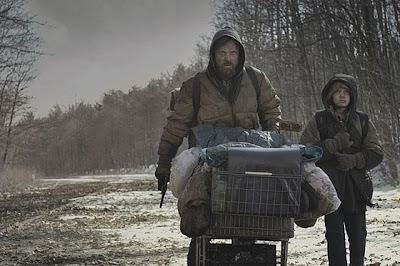 The first pictures of the film adaptation of Cormac McCarthy's Pultizer Prize winning novel (book #10 in my New Year's goal of reading 52 books this year!), featuring Academy Award nominated actor Viggo Mortenson as the unnamed father, hit the web a few days ago, but in case you missed them, I am posting some choice shots here. 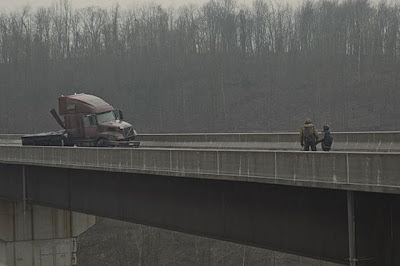 Judging from these released stills, director John Hillcoat has admirably evoked McCarthy's prose's atmospheric vision of an America dying from an unspecified apocalyptic event (environmental? nuclear war?) leaving the few survivors to salvage for what food and supplies remain. This should come to no surprise to those that saw Hillcoat's 2005 Australian Western, The Proposition, which was similarly desolate, sparse and gritty.

I'm guessing the intense bleakness of the project will keep away many of the best seller's readers who picked up the book per Oprah's recommendation, but personally it's the small yet poignant ray of hope of McCarthy's conclusion where I am longing for Hillcoat to remain faithful. 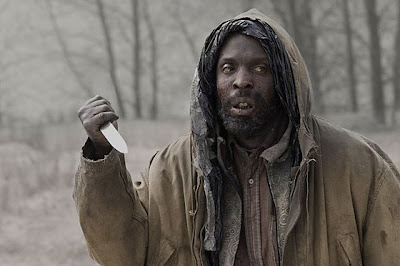 Michael K. Williams (Omar Little!) leads a supporting cast that includes twelve year old Kodi Smit-McPhee as the son, Charlize Theron, Guy Pearce, Robert DuVall and Garret Dillahunt, whom you may recognize from his two different roles on Deadwood and most recently from his role as Tommy Lee Jones' deputy in the last McCarthy film adaptation, No Country for Old Men.

The film opens on November 26th.

More photos can be found at USA Today's (!?!) website.

Posted by Colonel Mortimer at 4:58 PM

I am looking forward to this now. Oh btw I have my own blog here, so check it out. - Sean