The Movies Go to the Movies: Death Wish 2

In my review of Death Wish 2, I mentioned that one of the pleasures of watching the film today as a Los Angeles resident was to see Hollywood Boulevard of the 1980's in all it's dingy glory now that it's long been Disneyfied. In 1993 I was able to witnessed a little of the tail end of the disparity of the famous avenue when I worked on a film with my uncle that was shot on a theatrical stage that is now demolished. While homelessness still exists on the boulevard, 15 years ago the homeless population outnumbered the residence dwellers by a good three to one margin.  Today you are more likely to be accosted by drunk frat boys from the Valley and Orange County or a Scientologist concerned about your thetan levels than a guy looking for change to buy a bottle of whiskey. That is not change I can believe in! Seriously though, while I recognize the importance of a vital Hollywood Boulevard for both tourism and pride factors, I wish the boulevard renaissance would of had more to do with restoring the classic movie theatres that still lie unoccupied rather than constructing a giant mall.

That's why even a silly exploitation film like Death Wish 2 is of importance, shot on location in 1981, it provides a snapshot of a place that does not really exist anymore. Ironically, director Michael Winner would contend that fact as being a good thing.

This TMGTTM presents a first, unlike True Romance and Ed Wood, the three movie theatres in Death Wish 3 are all incidental location shots that play no role in the story of the film itself.

The first theatre is the only one still operating to this day, and arguably the most famous movie theatre in the world, the Grauman's Chinese Theatre (in the 80's it was retitled the Mann Chinese Theatre). 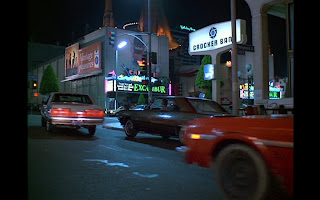 The movie on the marquee is John Boorman's Excalibur. Did Winner insert this shot as a symbolic nod, making a correlation between his film's hero Paul Kersey (Charles Bronson, natch) as the modern ancestor of the Knights of the Roundtable, keeping alive their endeavors and more importantly, spirit? 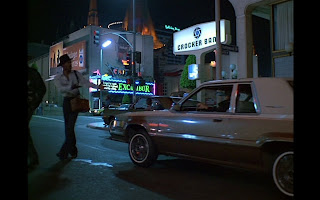 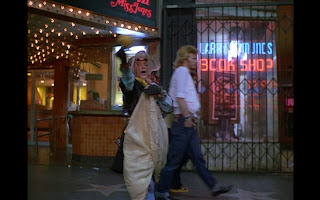 If you look very closely you can make out that the title of the film on the marquee is the classic 70's adult hit, The Devil in Miss Jones. And unfortunately my screenshots didn't come out as well as I hoped but crazy diaper-wearing dancing lady is blocking what is the poster for the infamous Linda Lovelace epic, Deep Throat. Apparently, these two films played continuously as a double bill for 8 years at the Ritz. 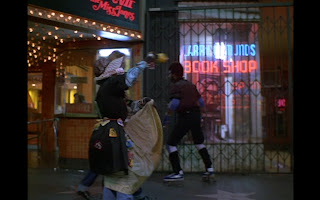 The third and final theatre that can be seen in Death Wish 2 is the Fox theatre. Built in 1918 as the Iris Theatre, the theatre which originally was an art deco design was renovated in the 50's when it was modernized and retitled the Fox. It too turned out its lights in 1991, though it still stands today and plans are to make it an all purpose live venue, so I am sure you will be seeing this season's American Idol runner-ups performing there regularly by 2011. 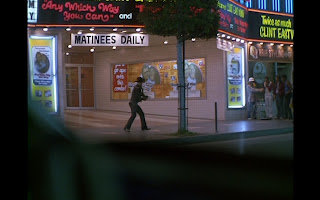 On the marquee is a double bill of the two Clint Eastwood/Orangutan buddy films, Any Which Way You Can and Any Which Way But Loose, studio mandated re-release double bills like that was another fun event that was terminated in the video era.
In my mind I have invented an imaginary competition between Eastwood and Bronson, as you may or may not know, Sergio Leone initially wanted Bronson for A Fistful of Dollars but settled on Eastwood which in turn launched his career and made him a superstar. When it came time to cast Death Wish, the producers first offered the role of Paul Kersey to Eastwood, who turned it down thinking it mined too familiar territory to his Dirty Harry films. Bronson was eventually cast and played the role for over 20 years.  So in my dreamworld Bronson is having a conversation with the poster of Clint Eastwood:
"So Clint, what have you been up to lately? Oh starring in hillbilly comedies with a monkey, well that's, uh, cute. (beat) Oh me, yeah, I am just keeping the savage streets of New York and Los Angeles safe for hardworking fellas. Anyway it's kind of busy work, so I should be going. But say hi to the monkey for me? (beat) Oh, orangutan, sorry"
For more info on the theatres, please click on the below links:
The Grauman's Chinese Theatre
The Ritz Theatre
The Fox Theatre
Posted by Colonel Mortimer at 11:36 PM

Labels: At the Movies, Death Wishin'