The Free Train to Meatville

The good news: The film adaptation of Clive Barker’s Midnight Meat Train which distributor Lionsgate dumped into only a handful of second run theatres for a perfunctory release in August after months of prerelease hype and advertising (to which the title admittedly emanated snickers and guffaws from many audiences I was in during showings of the trailers) is available via Fear Net (a Horror themed network that my cable company doesn’t provide) on Demand for free over two months before it hits DVD on February 17th, 2009. It’s presented in widescreen and if you have one of them fancy high-def-o-nition teevees it’s in HD too. 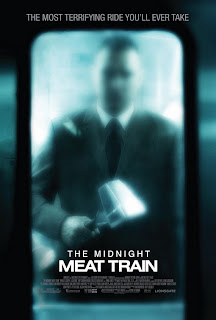 Japanese director Ryuhei Kitamura shoots the majority of the film in the blue tinted desaturated style that is all the rage amongst the current “extreme” horror crop. Other cinematic atrocities include the over reliant use of the lights on the subway train flickering on and off in quick succession in lieu of ADD editing to mask a lack of craftsmanship and what will sure to disappoint the gorehounds that were most passionately interested in the film: CGI gore, including computer generated blood (really?) and the removal of an eye belonging to a character played by Ted Raimi.

Clive Barker is not really known for the depth of his characters, and the main protagonist, a photographer who wants to impress a famous artist (played by Brooke Shields!) with his gritty “naturalistic” style, is not provided anything else beyond merely being the audience’s portal to the sinister goings on late at night in the New York subways by either screenwriter Jeff Buehler or actor Bradley Cooper (probably best known as Owen Wilson’s foil in Wedding Crashers). Buehler’s script calls for an abundance of contrived motivation, and seriously, is there only one police officer ever on duty in all of New York? Who, of course, happens to be in on the conspiracy! And I am still a little fuzzy as to why they allowed the photographer to survive certain death, was there something about his being destined to take over the meat train that I missed?

I will give credit to the creators for not unveiling too much of the ultimate reveal of what really is going on (spoiler: harvesting of flesh for CHUDs) leaving the specific intricacies mysterious, although one thinks that this is partially due to the overall silliness of the reveal. At this point though I would prefer a good old fashioned silly monster movie to yet another modern, indifferently composed, self serious, gory snoozefest.

If you are a horror fan and were interested in Midnight Meat Train, I recommend you watch the On Demand broadcast and decide yourself; hey the price is right, better than doling out money at your video store or wasting a spot on your Netflix queue. I am not sure why Lionsgate ultimately shied away from a wide release, it wouldn’t have been a blockbuster by any means, but it probably would have made back it’s relatively modest budget in a few weeks.

When all is said and done, it’s no worse than the first Hostel (I like part II better) or any of the Saw movies I’ve seen. Sadly, for horror aficionados, it’s no better either.

Posted by Colonel Mortimer at 9:24 AM

My friend aka the other guy I know who blogs knows the whole story about why the movie was never released. I guess the studio head decided he wanted to get out "these" type of films so he panned the movie, only releasing it thatres that would charge a certain amount per ticket aka cheap theatres. So the movie wasn't released wide and never made any money. Thats the gist of what he told me.