Trailer of the Week: Only 9 More Chopping Day 'Til Xmas Edition 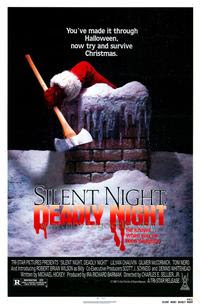 Considering the quality of the film, it's kind of silly that Silent Night, Deadly Night caused such controversy in 1984 when a group of mothers had the film's advertisements featuring an axe wielding madman dressed as Santa Claus removed from television airings and the film effectively pulled out of theatres mid-release. The film is bad, but it's fun/bad, a movie for which alcoholic consumption and a group of like minded trash connoisseurs are paramount to the viewer's enjoyment. It's hard to fathom there was a time the film was ever taken seriously, it was even released by Tri-Star, a secondary arm of Columbia Pictures, let alone considered detrimental to society.

But a murderous Santa Claus cannot be held back, and Silent Night, Deadly Night survived theatrical banishment and became a successful straight to video franchise in the late 80's and early 90's, although only Part 2 (which is most famous for having half its running time consist of flashbacks of scenes from the first film and the "Garbage Day" moment which became a Youtube sensation) expanded on the original storyline.

Really, mothers should have not only not protested the film, but study the essential parental lessons contained within, such as: never leave an impressionable child with his crazed grandfather who may convince him that Santa is an evil entity; don't stop your car and be attacked, raped and murdered by an escaped convict donning a Santa Claus costume in front of said impressionable child's eye; and let me stress this as strongly as humanly possible, never place your stuffed deer's head in a location in which a naked Linnea Quigley could be easily impaled upon it's antlers once said impressionable child has grown up to become a crazed psychopathic killer in a Santa suit!

Here's the trailer from 1984 which caused such a stir:

Posted by Colonel Mortimer at 11:25 PM